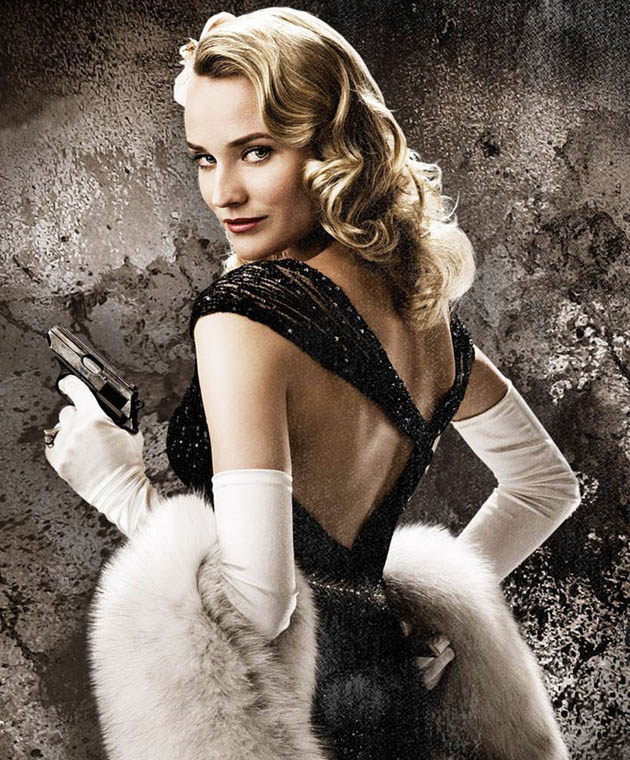 The nominees for the 2010 Screen Actors Guild Awards – SAG Awards, for short – were announced earlier today, Dec. 17. The only two real surprises among the feature film nominees (see full list further below) are:

As far as we can tell, this marks Diane Kruger’s first (not totally obscure) mention this awards season, as Christoph Waltz is the one Inglourious Basterds performer to have been singled out time and again, while fellow player Mélanie Laurent received nominations from the Detroit, St. Louis, and Online film critics.

An Education, on the other hand, wasn’t exactly unexpected. The surprise about its Best Cast nomination is that only one of its performers received an individual nod: Carey Mulligan, in contention for Best Actress.

How earthbound is the ‘Up in the Air’ supporting cast?

Making just about as much sense, Jason Reitman’s Up in the Air – which was not shortlisted for Best Cast – collected no less than three individual nods: Best Actor for George Clooney, and Best Supporting Actress for Vera Farmiga and Anna Kendrick.

And that surely means the film’s supporting players – Melanie Lynskey, Jason Bateman, Amy Morton, J.K. Simmons, Sam Elliott, Chris Lowell, et al. – must have been so horrible, but so horrible that they sucked out all the goodwill bestowed on the three Up in the Air principals.

In fact, Up in the Air received more individual nominations than any of the Best Cast (or “Performance by a Cast”) nominees. Inglourious Basterds and Lee Daniels’ family drama Precious managed two, while Kathryn Bigelow’s Iraq War thriller The Hurt Locker and Rob Marshall’s musical Nine received one each.

For the last film, Marion Cotillard has been pushed as Best Actress. A miscalculation, as in that ensemble piece focused on Daniel Day-Lewis’ character (Marcello Mastroianni’s old 8½ role), Cotillard would have had a much better chance in the supporting actress category.

At the Oscars, Academy members may place their nominees in the category they find most appropriate; at the SAG Awards, the placement is done according to how the performers are categorized in the official submissions.

Expect the Oscars to look pretty much like the SAG Award nominations, except for:

In fact, 2010 may turn out to be the second year when the Best Picture Academy Award winner – i.e., Up in the Air, or even something like James Cameron’s SAG Awards orphan Avatar – ends up taking home an Oscar statuette despite the absence of a Best Cast SAG Award nod.

The first and only time to date that happened? Back in 1995, the first year of the SAG Awards, when Mel Gibson’s war epic Braveheart became the Academy’s Best Picture after its ensemble cast was left out of the SAG nominations.

See below our extensive – and, shockingly, for the most part correct – SAG Awards predictions, which were posted yesterday. 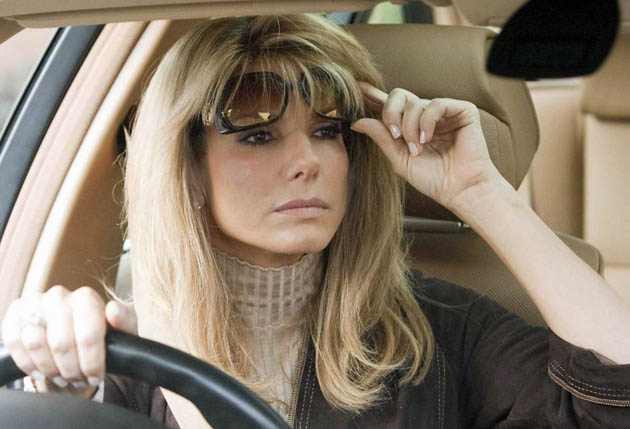 Sandra Bullock in The Blind Side. The sentimental, socially conscious family drama The Blind Side is about to cross the $200 million mark in the U.S. and Canada, making it not only the sleeper hit of 2009 but also Sandra Bullock’s biggest domestic box office success to date (not adjusted for inflation). And then there’s Bullock’s other 2009 hit, The Proposal, which earned nearly $165 million domestically. Her third 2009 release, All About Steve, was a critical and box office flop, but there’s a good chance those voting for the SAG Awards will decide that the time has come for the Speed and Miss Congeniality actress.

Dec. 16: The nominations for the 2010 Screen Actors Guild Awards will be announced tomorrow morning by Michelle Monaghan and Chris O’Donnell. As usual, expect some surprises.

In the past, SAG voters – only a relatively small group of SAG members vote on the nominations – have made unexpected choices such as Dev Patel for Best Supporting Actor in Slumdog Millionaire, Best Actress nods for Zhang Ziyi in Memoirs of a Geisha and for Patricia Clarkson in The Station Agent, and Best Cast nods for 3:10 to Yuma, Hairspray, and Hustle & Flow.

But no matter what, don’t expect a Best Cast mention for James Cameron’s Avatar.

Critics’ faves Meryl Streep and Carey Mulligan will definitely be shortlisted for the Best Actress SAG Award. The other three slots are a little iffier.

Sandra Bullock will likely get her first Best Actress SAG Award nod for playing a “conservative” matriarch who adopts an inner-city teen (Quinton Aaron) in John Lee Hancock’s sleeper hit The Blind Side.

After all, Bullock has been around for more than two decades, and Hancock’s crowd-pleasing drama was her second major hit of 2009 (following Anne Fletcher’s The Proposal). All About Steve notwithstanding, this has been the year when Bullock proved she can do comedy and drama and earn millions in both genres – and that’s no small feat.

Helen Mirren did get nominations for both the Golden Globes and the Spirit Awards, while Gabourey Sidibe is, along with Carey Mulligan, the (English-speaking) female newcomer of the year. As Precious is bound to get a Best Cast SAG Award nod, it’s fair to say that Sidibe will get her own personal nomination since she’s at the core of Lee Daniels’ film. 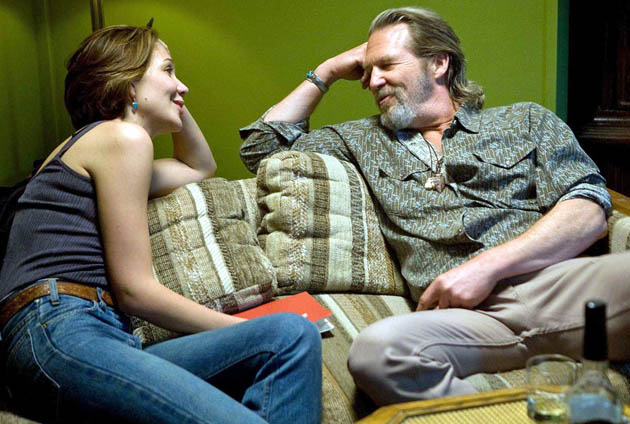 Jeff Bridges in Crazy Heart, with Maggie Gyllenhaal. Although not exactly U.S. critics’ favorite this awards season for his portrayal of an ageing country singer/composer in Scott Cooper’s Crazy Heart, four-time Academy Award nominee[1] and 2010 SAG Award nominee Jeff Bridges, in movies for four decades, may turn out to be the sentimental favorite come Oscar (and SAG Award) time. To date, George Clooney has been the U.S. critics’ no. 1 Best Actor choice for his performance in Jason Reitman’s Up in the Air.

The 2010 SAG Awards’ Best Actor field is a little crowded. Even so, four actors have a lock on a nomination: George Clooney for Up in the Air, Jeff Bridges for Crazy Heart, Morgan Freeman for Invictus, and Colin Firth for A Single Man.

The fifth slot, however, is up for grabs. Jeremy Renner is a strong possibility, especially considering that The Hurt Locker is sure to get a Best Cast nod.

Nominations for actors with hyphenated names?

That said, it’s just as possible that Daniel Day-Lewis will get shortlisted for Nine, even though neither the film nor his performance has created many waves among U.S. critics. Well, except for the Broadcast Film Critics Association.

Joseph Gordon-Levitt got a surprising Golden Globe nod and has a pretty good chance of getting some SAG Award recognition as well for Marc Webb’s sleeper hit (500) Days of Summer, while it’s possible that Viggo Mortensen’s fellow actors will want to honor him for his tackling a difficult role in John Hillcoat’s dystopian drama The Road.

Jeff Bridges’ SAG Award nominations were as Best Supporting Actor for The Contender and as a member of the Seabiscuit (2003) cast.

Penélope Cruz in Nine. Rob Marshall’s $80 million film version of the Broadway musical Nine, itself a musicalized adaptation of Federico Fellini’s semi-autobiographical 8½ (1963), has found little love in the top categories this awards season. Considering its prestigious ensemble – and The Weinstein Company’s influence – a Best Cast SAG Award nomination seems likely for the eagerly anticipated but coolly received musical. Yet Golden Globe nominee Penélope Cruz should be the only Nine performer shortlisted for an individual SAG Award for her showy performance as Daniel Day-Lewis’ mistress (Sandra Milo’s role in 8½).

The actresses listed below are the same ones who received Golden Globe nominations. Two of them are shoo-ins: Mo’Nique for Precious and Anna Kendrick for Up in the Air. The other three are “very strong possibilities.”

Marion Cotillard is the one getting most of the good notices for Nine, but Penélope Cruz has her name, her likability quotient, and her other 2009 performance – in Pedro Almodóvar’s Broken Embraces – to help her get a nod from her fellow actors for playing Daniel Day-Lewis’ showy mistress (Sandra Milo in 8½).

Vera Farmiga has the less showy role in Up in the Air, but she’s a well-regarded actress whose time may have finally come. As a plus, Up in the Air will likely land a Best Cast nomination. 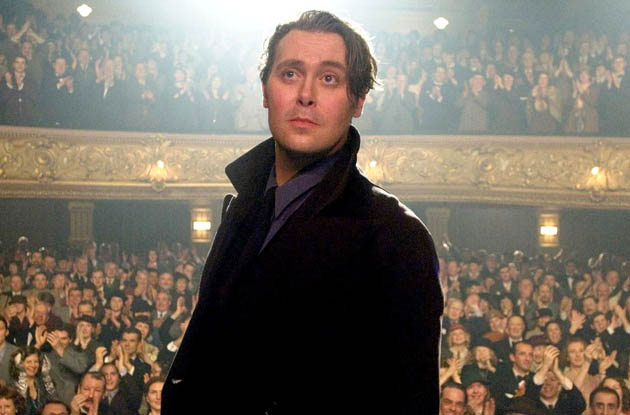 Christian McKay in Me and Orson Welles. Based on Robert Kaplow’s novel, Richard Linklater’s little-seen period drama Me and Orson Welles stars Zac Efron as the first half of the title, Claire Danes as Efron’s romantic interest, and Christian McKay as the Citizen Kane filmmaker/star. Set in New York in 1937, Me and Orson Welles chronicles the curious goings-on after a high-school student is cast as Lucius in Welles’ Mercury Theater production of Julius Caesar. Christian McKay has topped the Best Supporting Actor category in several critics awards lists, and may turn out to be an upset nominee at both the SAG Awards and the Academy Awards.

The SAG Award nominations in the Best Supporting Actor category will most likely match those of the Golden Globes, as, for whatever reason, this is the least competitive race in the acting categories.

Update: Me and Orson Welles’ Christian McKay may turn out to be an “upset” nominee, as his portrayal of the Citizen Kane and The Lady from Shanghai filmmaker has been widely praised. But how many SAG Award members have had the chance to take a look at Richard Linklater’s little-seen film starring Zac Efron and Claire Danes?

I hope si for An education.

Viggo Mortensen being overlooked by the globes was appalling to me. I so hope he is honored here.

Did anyone in S.A.G. feel like Quinton Aaron should be nominated for anything I’m just asking… Me personally I feel the guy did a great job playing Michael Oher…

What I want to know is where the hell is Tom Hardy on everyone’s Best Actor list????????
And don’t say no one knows him. He was Shinzon in the StarTrek bomb and this winter Heathcliff in PBS Wuthering Heights. I think the man is one of the most talented actors of our generation. Brit Indep awards have recognized him but not Bafta, not any US awards. I say to hell with them.

I hope that Cheri gets nominated for something, its been underappreciated and ignored. I cant believe the Golden Globes nominated Julia Roberts for Duplicity!!