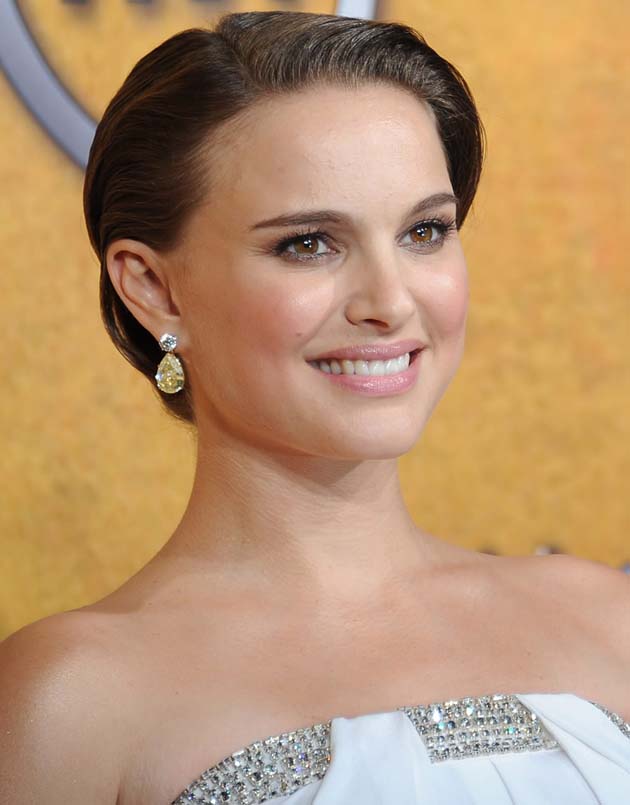 In her acceptance speech on Jan. 30, ’11, at the Shrine Exposition Center in Los Angeles, Portman thanked her parents, who “always taught me to work my hardest and never be an asshole.” She added that it’s “never acceptable [to be an asshole].” Apparently, the mere word itself is “never acceptable” – at least on American television.

Natalie Portman has been on an awards-season roll, having won nearly every Best Actress trophy and/or mention in the United States. She’s currently the favorite to win the Best Actress Academy Award.

ABC censors will likely be on high alert in case the actress dares to utter another “never acceptable” word at the stately Oscar ceremony – where the Best Picture winner will likely be the one in which, in a climactic moment, the hero lets out “fuck, fuck, fuck!”

Claire Danes’ won the SAG Award for playing an autistic woman in the television movie Temple Grandin. Danes remarked that she was competing with fellow Little Women players Winona Ryder (When Love Is Not Enough: The Lois Wilson Story) and Susan Sarandon (You Don’t Know Jack). Absentee Al Pacino was the Best Actor winner for You Don’t Know Jack.

“So grateful to have this union protecting me every day,” said Best Actress winner Natalie Portman (Black Swan). She then proceeded to thank fellow player Mila Kunis and director Darren Aronofsky. 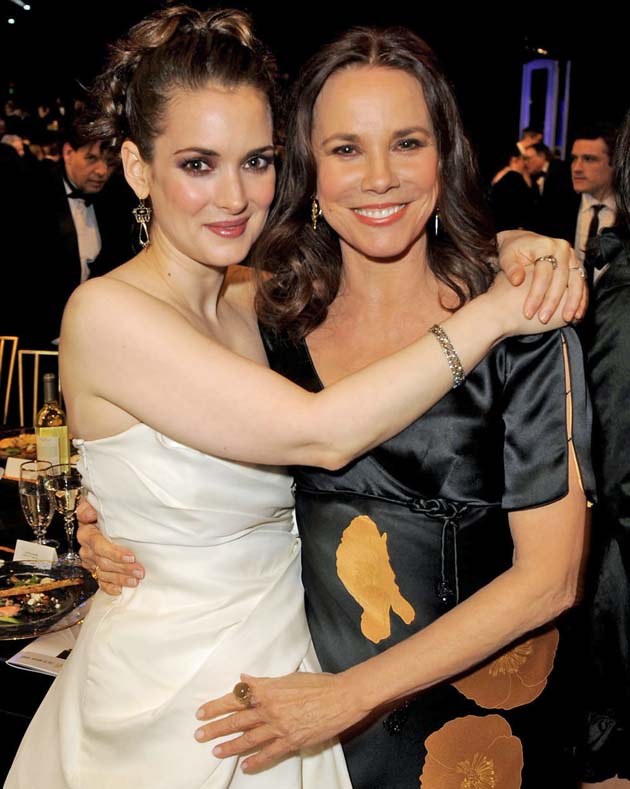 Barbara Hershey and fellow Black Swan player Winona Ryder are seen above at the 2011 SAG Awards ceremony held at the Shrine Auditorium in Los Angeles on Sunday, Jan. 30. Ryder was a nominee for Best Actress in a Television Movie or Miniseries for her performance in When Love Is Not Enough: The Lois Wilson Story.* She lost to Claire Danes in Temple Grandin.

Along with Barbara Hershey, Natalie Portman, Vincent Cassel, and Mila Kunis, Winona Ryder was also one of the Black Swan cast members up for the Best Cast SAG Award. Tom Hooper’s The King’s Speech, starring Colin Firth, Helena Bonham Carter, and Geoffrey Rush, turned out to be the winner in that category.

In the last 40 years, Barbara Hershey has been featured in more than 40 films. Here are a few titles:

* Note to silent film aficionados: No connection to The Covered Wagon actress Lois Wilson. When Love Is Not Enough is about the co-founder of Al-Anon, an organization whose mission is to help spouses, relatives, etc. of alcoholics. 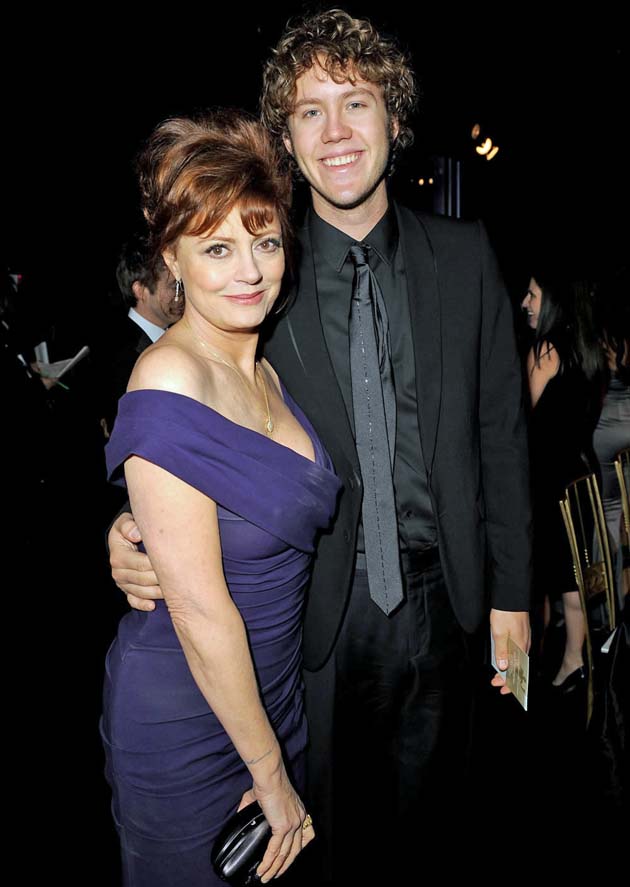 Pictured above are Susan Sarandon and son Jack Henry Robbins at the SAG Awards, held on Jan. 30, ’11, at the Shrine Auditorium in Los Angeles.

In addition to hosting the ceremony with Tina Fey, Sarandon was a Best Actress in a Television Movie or Miniseries nominee for HBO’s You Don’t Know Jack. She lost to Claire Danes for Temple Grandin; her co-star Al Pacino, however, won The Actor for Best Actor. (Pacino didn’t attend the ceremony; and in case you’re wondering, the SAG Awards’ statuette is known as The Actor.)

Some were dismayed that the Glee ensemble failed to win a SAG Award for Best Cast. Sarandon, for her part, told E! Online that had she been asked, she would have appeared in a cameo in the Glee episode that paid tribute to The Rocky Horror Picture Show.

“What I saw I thought was so fabulous,” she remarked. “I thought it was so moving. They [people in general] kept asking if I was going to be on the episode. But nobody spoke to me about doing anything on the show.”

Susan Sarandon has been nominated for four SAG Awards. See below. 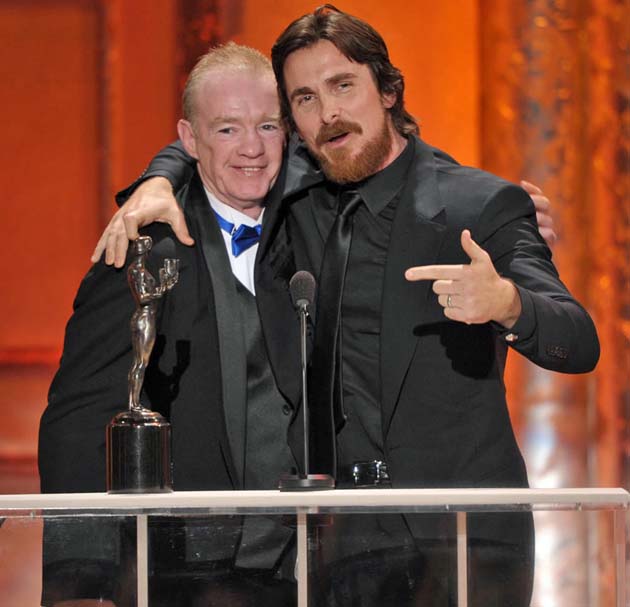 Some were moved by Bale’s acceptance speech, which included the following (to Eklund), “Thank you for living the life, and thank you for letting me play you.” The two can be seen in the photo above; curiously, Eklund looks nothing like the actor who played him.

Directed by David O. Russell, The Fighter is up for seven Academy Awards, including Best Picture. Christian Bale, Melissa Leo, and Amy Adams are all up for Oscar honors in the supporting categories as well. 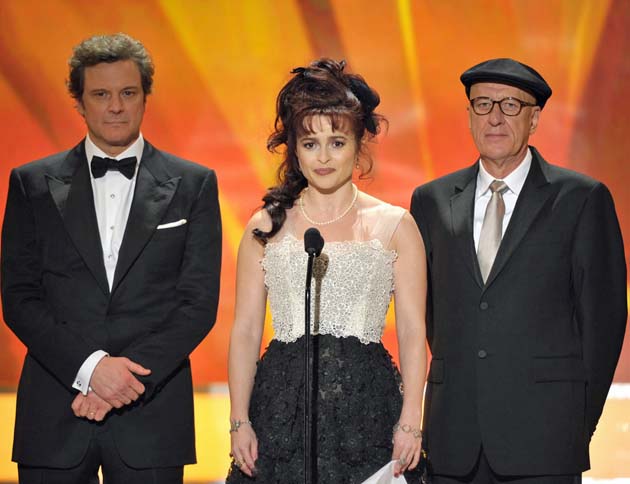 Colin Firth, pictured above with Helena Bonham Carter and Geoffrey Rush, won the SAG Award for Best Actor for his performance as the stuttering King George VI in Tom Hooper’s The King’s Speech. The acclaimed and surprisingly successful British period drama received the Screen Actors Guild Award for Best Cast as well.

Claire Bloom: One degree of separation from the silent era

While accepting the Best Cast trophy, Best Supporting Actor nominee Geoffrey Rush singled out Claire Bloom, who plays the Queen Mother in the film, referring to her as “the delicious Claire Bloom … [who] puts us in one degree of separation from Charles Chaplin.”

Bloom, whose film career began in the late 1940s, was Chaplin’s leading lady in the 1952 drama Limelight.

Best Supporting Actress winner Melissa Leo (The Fighter) apologized for getting political after telling the crowd at the SAG Awards, “I don’t know what’s ahead in the future,” and then suggesting that if the Screen Actors Guild join forces with the American Federation of Television and Radio Artists (AFTRA), working actors would have a stronger voice. Leo then added that “unions made this country strong,” before a last thank-you to The Fighter‘s Mark Wahlberg.

Alec Baldwin, five-time winner of the SAG Award for Best Actor in a Comedy Series for 30 Rock, remarked: “I don’t know what to say. This is ridiculous.” Baldwin, however, knew he should thank the Teamsters.

“This is the biggest surprise I’ve ever had in this business,” 89-year-old Betty White remarked after winning a SAG Award for Best Actress in a Comedy Series for Hot in Cleveland. She then proceeded to say that the Hot in Cleveland cast is more than a family and that they all love going to work every day. White also said those remarks were a cliche (but were all true).

The stunt teams of Inception and True Blood won SAG Awards in, respectively, the motion picture and television categories.

The intro to Ernest Borgnine’s Life Achievement Award segment included a speech by Morgan Freeman and Tim Conway (of McHale’s Navy), in addition to an interesting announcement by Burt Lancaster, made after Marty, costarring Betsy Blair, earned Borgnine the Best Actor Oscar.

“I always enjoyed working as an actor,” Borgnine told the media backstage. “… It’s been a thing of joy for me whenever I’m working.”

Advise for young actors nominated tonight: “Keep studying.” Borgnine says his success was due to his “learning about what life is all about … [Regarding a screenplay that says “two people fall in love” one has to know] what brings two people together.”

Borgnine added that as you learn, “The first thing you know you become more involved in the script and more involved in life itself. … You gotta make people understand. … There’s a lot of people in the world who are thumbsuckers. It’s wonderful. And you have their attention. The minute they take their thumb out, you’ve lost them. … You have to break it down to the lowest common denominator so the thumbsuckers are happy. Makes sense? I guess it does. It’s always worked for me, anyways. I’ve always been a thumbsucker myself.”

Next time you complain about how unsubtle and inane most movies are, remember Ernest Borgnine’s words. They’re all made with thumbsuckers in mind. 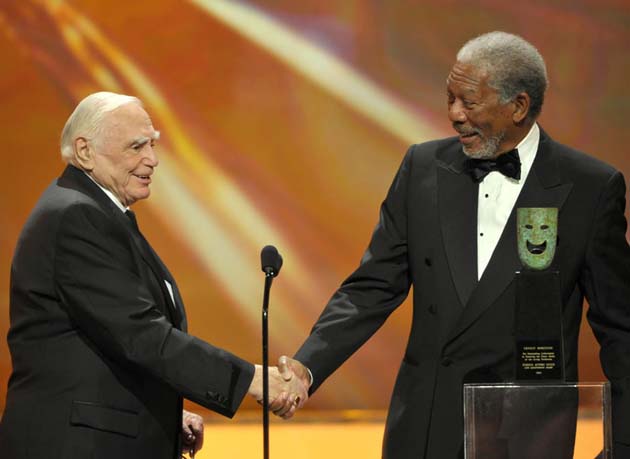 Ernest Borgnine, who turned 94 this past Jan. 24, was this year’s recipient of the Screen Actors Guild’s Life Achievement Award. He was introduced by fellow McHale’s Navy alumnus Tim Conway and by 2004 Best Supporting Actor Academy Award winner Morgan Freeman (Million Dollar Baby), one of the stars of Robert Schwentke’s 2010 sleeper box office hit Red – in which Borgnine has a supporting role.

As part of the Ernest Borgnine movie montage, viewers got to watch actor-producer Burt Lancaster plug Borgnine’s Oscar-winning performance in Delbert Mann’s Marty (1955) – a slice-of-life comedy-drama produced by a company partly owned by Lancaster himself.

“I always enjoyed working as an actor,” Borgnine told journalists backstage. “… It’s been a thing of joy for me whenever I’m working.”

He advised young actors to “keep studying,” and said that he has always strived for the lowest common denominator in his performances so as to keep “thumbsuckers” interested.

David Fincher’s The Social Network, up for Best Actor (Jesse Eisenberg) and Best Cast, failed to win anything at the 2011 SAG Awards. Colin Firth was named Best Actor for his performance as the speech-impaired King George VI in Tom Hooper’s The King’s Speech, while the British period drama received the Best Cast trophy.

Rush bestowed special praise on veteran Claire Bloom, who plays the Queen Mother, referring to her as “the delicious Claire Bloom … [who] puts us in one degree of separation from Charles Chaplin [Bloom’s co-star in the 1952 drama Limelight].” Rush added that if a young The King’s Speech cast member – I missed his name – remains a working actor, Bloom, by way of the (now) young actor, “could well be standing here in 2070. And that’s what our industry is all about.”

The King’s Speech has now topped the three most important American Guild awards: the Producers Guild, the Directors Guild, and the Screen Actors Guild. (The David Seidler-written drama was deemed ineligible for the Writers Guild Awards, whose winners will be announced in Feb.) A Best Picture Oscar victory seems quite likely now. And to think that two weeks ago The Social Network was the absolute favorite following a whole array of critics awards.

Outstanding Performance by a Male Actor in a Supporting Role
Christian Bale – The Fighter as Dicky Eklund.
John Hawkes – Winter’s Bone as Teardrop Dolly.
Jeremy Renner – The Town as Jem Coughlin.
Mark Ruffalo – The Kids Are All Right as Paul Hatfield.
Geoffrey Rush – The King’s Speech as Lionel Logue.

Outstanding Performance by an Ensemble in a Drama Series

Outstanding Performance by an Ensemble in a Comedy Series

I was so glad Melissa Leo won.

She’s one of our best actresses.

Congratulations Alec! You deserve the SAG award. You are a fine actor. Very convincing. You are a natural. Enjoy you on “30 Rock” and on the awards shows.

Go Alec!!! He should have won the Globe too. he’s the best character on TV. He definitely doesn’t play himself on 30 Rock! LOl…

Oh, Natalie Portman looks so pretty.
She should have won a SAG award for Best Pretty Actress. I love her in Black Swan, but she looks evenj more lovely in this pohtograph.

Barbara Hershey is as stunning as ever.

She looks fantastic! I am a huge fan.