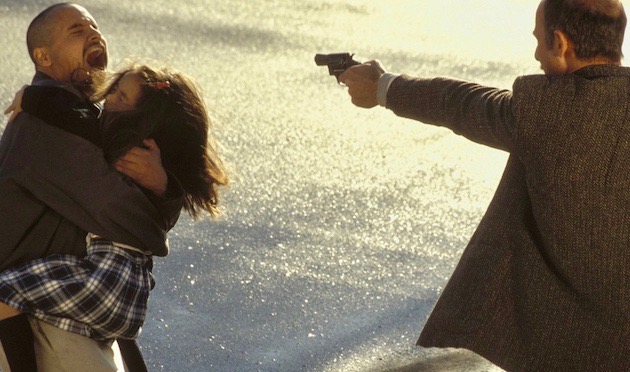 Ang Lee’s gay cowboy romance Brokeback Mountain remains – by far – this awards season’s favorite release in the United States. Except, that is, among Screen Actors Guild (SAG) Award voters. Among this year’s winners of the various Actor statuettes – a.k.a. the SAG Awards – announced on Jan. 29, are the following:

Curiously, Brokeback Mountain had received three SAG Award nominations: Best Actor for Heath Ledger, Best Supporting Actress for Michelle Williams, and Best Supporting Actor for Jake Gyllenhaal. Despite its extensive name cast and myriad “climactic” sequences, Crash only had two SAG nods, for Dillon and Cheadle – both of whom lost to Paul Giamatti.

So, how could Crash win Best Cast?

Well, when it comes to the SAG Awards’ Best Cast category, it does help for movies to have large ensembles – especially large all-star ensembles. Past SAG winners include:

Brokeback Mountain, on the other hand, is chiefly a two-character piece (the two lovestruck cowboys), with one additional small – albeit important – role (the cuckolded wife of one of the cowboys).

So perhaps the Crash win shouldn’t have been such a surprise. After all, Haggis’ film is the cinematic embodiment of an (all-star) ensemble piece.

Now, some will say that its Best Cast SAG Award win indicates that Crash has suddenly become the movie to beat at the 2006 Academy Awards. That’s largely because many misperceive the SAG Awards’ Best Cast category as its “Best Picture Oscar” equivalent – as if there weren’t a sizable difference between “Best Film of the Year” and “Best Acting Ensemble of the Year.”

The following are previous Best Cast SAG winners that failed to win the Best Picture Oscar: Apollo 13, The Birdcage, The Full Monty, Traffic, Gosford Park, and last year’s Sideways. That’s six out of a total of ten Best Cast winners to date.

For the record, The Birdcage ended up shortlisted in one single Oscar category: Best Art Direction-Set Decoration; the other five movies did garner multiple nominations including Best Picture.

So, following its SAG Award win, is Crash about to overtake Brokeback Mountain?

Not necessarily. Brokeback Mountain remains the 2006 Oscars’ favorite. Indeed, the night before the SAG Awards the “gay Western” earned Ang Lee the Directors Guild of America Award. See further below.

The latter was a triple SAG Award nominee: along with her fellow Desperate Housewives cast members, Huffman also won the Best Ensemble in a Comedy Series award, in addition to having been shortlisted in the Theatrical Motion Pictures’ Best Actress category for Duncan Tucker’s father(-to-mother)-son comedy-drama Transamerica.

Outstanding Performance by a Cast in a Motion Picture

Lesbian Comedy The Kids Are All Right Hits Wall