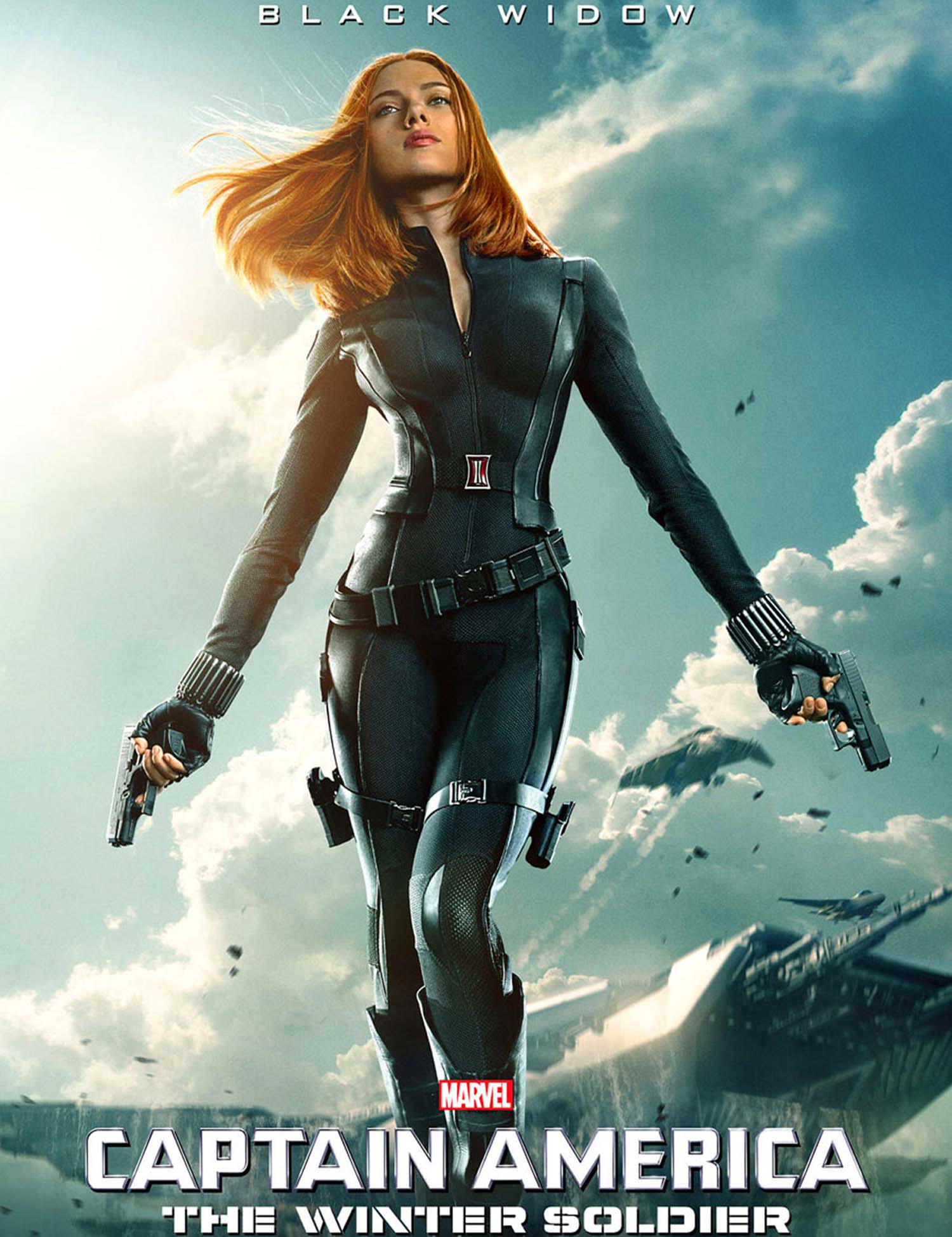 Scarlett Johansson has created quite a bit of a stir in recent days. Yesterday, Jan. 30, Captain America: The Winter Soldier posters came out, revealing Chris Evans as Captain America, Samuel L. Jackson as Nick Fury, and a tightly garbed Scarlett Johansson as a seductive, hair flowing in the wind, Black Widow. And like every good film noir heroine worth her make-up, she’s deadly, too; forget the cleavage, the lips, and the hips, and focus on those two guns.

And there’s more. Let’s not forget Scarlett Johansson looking sultry in a 2014 Super Bowl ad plugging SodaStream, which went viral and created quite a bit of controversy, both of the tabloid and the political varieties. First, tongues wagged (and some drooled) because, gee, didn’t Johansson spice up soda pop? Then, the ad was censored by NBC, so there would be no mention of either Coca-Cola or Pepsi-Cola in it (Pepsi is one of the 2014 Super Bowl sponsors). Capping it all off, Scarlett Johansson was forced to resign from her role as Oxfam Global Ambassador because that organization is against SodaStream and other companies operating in Israeli settlements in impoverished Palestinian communities.

All the recent publicity – both good and bad – is surely good news for another Scarlett Johansson movie, Under the Skin, as the film’s trailer became available online in the last day or so. Else, despite Johansson’s presence, the indie film might have gone totally ignored.

As for Captain America: The Winter Soldier, it starts rolling out around the world on March 26, 2014. Chile, Belgium, France, the UK, Russia, Argentina will all get the chance to check out Captain America 2 before it reaches North American shores on April 4.

Recommended for You
The Hateful Eight screenwriter Quentin Tarantino.

Quentin Tarantino will no longer be making the Western The Hateful Eight. Why not? Well, Tarantino claims he sent out the film’s screenplay to a group of six people, one of whom allegedly showed it to his agent, who then showed it to other agents, who then began calling Tarantino’s agent Mike Simpson, asking him to cast their clients in the film.

“I’m very, very depressed,” Tarantino was quoted as saying at Deadline.com, which first broke The Hateful Eight Screenplay Leak story on Tuesday, January 21, 2014. “I finished a script, a first draft, and I didn’t mean to shoot it until next winter, a year from now. I gave it to six people, and apparently it’s gotten out today.”

Now, before they begin flailing and wailing, Quentin Tarantino fans should be aware that the writer-director is planning on releasing the screenplay for The Hateful Eight in book format. Then, within the next five years, a movie version could possibly ensue.

Leak or no, it’s unclear whether or not The Hateful Eight is comedy or drama or sci-fier (there are Western sci-fiers, e.g., the Daniel Craig-Harrison Ford dud Cowboys & Aliens) or musical (think The Harvey Girls, with Judy Garland, or Annie Get Your Gun, with Betty Hutton); whether or not it was inspired by either John Sturges’ The Magnificent Seven, itself a remake of Akira Kurosawa’s Seven Samurai, or Federico Fellini’s 8 1/2, which itself inspired Bob Fosse’s All That Jazz – or both; and whether or not those who read the screenplay loved or hated The Hateful Eight.

The Hateful Eight screenplay update: As posted at TheWrap, The Hateful Eight was to be shot in 70mm, much like Paul Thomas Anderson’s The Master, which, cosmically, also had its screenplay leaked. Much of the post-Civil War-set The Hateful Eight supposedly takes place in either a stagecoach (shades of John Ford’s 1939 classic Stagecoach) or a haberdashery (shades of your guess is as good as mine). The plot features bounty hunters, bounty hunted, renegades, a hangman, and a Frenchman, a couple of which to be played by Quentin Tarantino collaborators Samuel L. Jackson and Christoph Waltz. Also worth noting, the screenplay for The Hateful Eight (unfortunately?) features neither aliens nor musical numbers.

But who were The Hateful Eight‘s Chosen Six? Quentin Tarantino gave one copy to Django Unchained producer Reggie Hudlin, “and he let an agent come to his house and read it. That’s a betrayal, but not crippling because the agent didn’t end up with the script.”

Tarantino also provided a copy of The Hateful Eight‘s screenplay to Michael Madsen, Tim Roth (Pulp Fiction, Best Supporting Actor Oscar nominee for Rob Roy, 1995), and Bruce Dern, who is in the running for the 2014 Best Actor Academy Award for Alexander Payne’s Nebraska. “The one I know didn’t do this is Tim Roth,” says Tarantino. “One of the others let their agent read it, and that agent has now passed it on to everyone in Hollywood.”

Now, “one of the others” who? There should be two more The Hateful Eight screenplay readers out there, as Hudlin, Madsen, Roth, and Dern make four. Apparently, The Missing Two are Madsen’s and Dern’s agents.

Of course, screenplay leaks have taken place long before The Betrayal of Quentin Tarantino’s The Hateful Eight. As listed (last year) by Jason Bailey at Flavorwire.com, examples range from Orson Welles’ Citizen Kane to the horror franchise Scream 2, Ridley Scott’s Prometheus (curiously, after the film had been released following drastic screenplay rewrites), Bill Condon’s The Fifth Estate (ironically, about WikiLeaks and leaked by WikiLeaks), and the Superman reboot Superman Flyby, which was eventually given the boot. (Sorry.)

“It was probably as a result of Mankiewicz’s idiotic indiscretion,” Pauline Kael, whether fairly or bombastically, wrote in her essay “Raising Kane,” “that the various forces were set into motion that resulted in the cancellation of the premiere at the Radio City Music Hall, the commercial failure of Citizen Kane, and the subsequent failure of Orson Welles.” (Curiously, Charles Lederer reportedly contributed to the screenplay of Orson Welles’ 1948 film noir The Lady from Shanghai, which starred Welles and Rita Hayworth.)

And finally, let’s not forget that only a few months ago George Miller’s 2007 screenplay for an aborted Justice League film was leaked online. And, as a literary aside, that Stephenie Meyer scrapped her work on the fifth Twilight novel, Midnight Sun, after a first draft was leaked online. Starring Kristen Stewart, Robert Pattinson, and Taylor Lautner, the five Twilight movies (adapted from four novels) have grossed more than $3.35 billion at the worldwide box office.

She is very fine-looking, but I suspect that this image was photoshopped from one that had nothing to do with Disney or Marvel. Does anyone else see the distinct similarities between this poster and a certain Boris Vallejo painting?