Now, the FBI is reportedly after those who have hacked into the computer and/or cell phone files of various female celebrities.

In addition to Johansson – it isn’t clear if the FBI is involved in her particular case – rumored hacker victims include Mila Kunis, Vanessa Hudgens, Jessica Alba, Christina Aguilera, Ali Larter, and Demi Lovato.

Johansson’s naked photos have been removed from various sites after her attorney sent out “cease and desist” letters. The images show the 26-year-old actress topless and her bare behind. They were allegedly stolen from her cell phone.

Last year, Johansson won a Tony for Best Performance by a Featured Actress in a Play – a revival of Arthur Miller’s A View From the Bridge.

Marilyn Monroe pictures taken during her first photo shoot – when she was still known as Norma Jeane Dougherty – will be auctioned following a September 2011 Florida bankruptcy judge’s ruling.

Proceeds from the selling of Monroe’s images and their copyrights will help to settle the debts of photographer Joseph Jasgur. Julien’s Auctions will handle the proceedings in their “Icons & Idols” auction, to be held Dec. 2-4 in Beverly Hills.

According to Julien’s Auctions chief Darren Julien, the Marilyn Monroe photos have been locked up for more than two decades as a result of court battles. Julien added that Jasgur was hired by the Blue Book modeling agency to shoot Norma Jeane, then 19 years old, about a year or two (depending on the source) before her film debut.

It’s unclear how much the images and copyrights will fetch. (Note: In a signed release for the photos, Norma Jeane “certifies and covenants” that she is at least twenty-one years of age.)

Among Monroe’s most memorable star vehicles are Henry Hathaway’s Niagara (1953), with Joseph Cotten and Jean Peters; Hawks’ Gentlemen Prefer Blondes (1953), opposite Jane Russell; Billy Wilder’s The Seven Year Itch (1955), with Tom Ewell, and Some Like It Hot, with Jack Lemmon and Tony Curtis; and Huston’s The Misfits (1961), co-starring with Clark Gable and Montgomery Clift.

Russell Crowe’s Jor-El doesn’t look at all like Marlon Brando’s, as can be attested by Man of Steel on-set pictures found at the Daily Mail (via Flynetpictures.com). As Superman’s papa, Crowe looks like a (admittedly, quite well-dressed) medieval wrestler; Brando, for his part, looked like a futuristic grey-haired wise man.

Snyder, of course, is best known for 300, Sucker Punch, and Watchmen. Russell Crowe won a Best Actor Oscar for Ridley Scott’s Gladiator (2000). He was nominated two other times, for Michael Mann’s The Insider (1999) and Ron Howard’s Oscar-winning drama A Beautiful Mind (2001).

Man of Steel is scheduled to open on June 14. 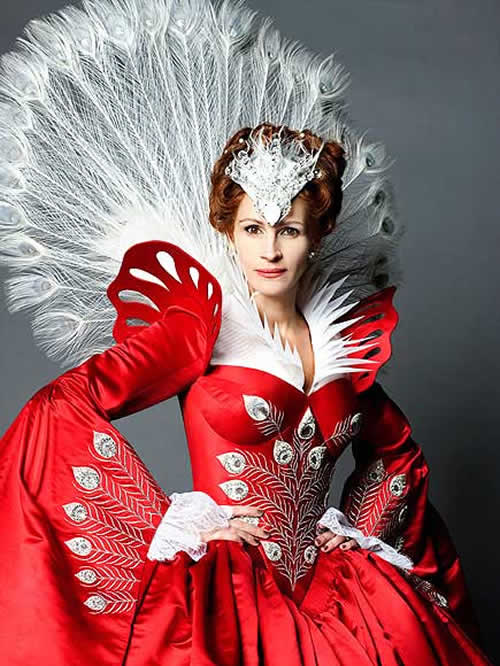 Remember the sweet Julia Roberts of Pretty Woman? Well, you don’t want to mess with this Julia Roberts. Definitely, not with that cleavage. Or those hands on hips. Or that upside-down tiara. Or that bright red dress. Or those white peacock feathers, whose tips are probably poisoned.

Red becomes Roberts, which can be seen above as the Evil Queen in Tarsem Singh’s upcoming Snow White movie – the one not starring Kristen Stewart. Roberts’ feathers, tiaras, and (I assume) apples will be aimed instead at Lily Collins, who can be currently seen in John Singleton’s thriller Abduction, starring none other than Stewart’s The Twilight Saga: Breaking Dawn – Part 1 co-star Taylor Lautner. See, Hollywood is just a little village. Everybody works with everybody else.

Julia Roberts’ Evil Queen clearly doesn’t appreciate the fact that Lily Collins’ Snow White is not only younger, but is also wearing a dress much too similar to the Queen’s. Collins’ Snow White has absolutely nothing to do with Kristen Stewart’s Joan of Arc-looking heroine in Snow White and the Huntsman. Collins’, in fact, is much closer to the Disney version – though they aren’t exactly alike, either.

Singh’s Snow White project comes out via Relativity Media on March 16, a few months ahead of Universal Pictures’ Snow White and the Huntsman.

Armie Hammer may or may not get to play opposite Johnny Depp in Gore Verbinski’s one-trillion-dollar version of The Lone Ranger. But Hammer, one of the stars in David Fincher’s Academy Award-nominated The Social Network, can already add the role of Prince Charming to his resume. In this still nameless Snow White project, Hammer is joined by Lily Collins as Snow White and a bosomy Julia Roberts as the Evil Queen.

Singh’s Snow White project comes out via Relativity Media on March 16, a few months ahead of Universal Pictures’ Snow White and the Huntsman, which stars Kristen Stewart as Snow White, Chris Hemsworth as the Huntsman, Charlize Theron as the Evil Queen, and Sam Claflin as Prince Charming. Rupert Sanders is the director.

The Snow White images were found at Entertainment Weekly.