Steve Montgomery 7 years ago
Sean Penn in 21 Grams. In Hollywood since 1981 (Taps), Penn has been seen in more than 30 films, both comedies and dramas, hits and bombs, ranging from Fast Times at Ridgemont High and Shanghai Surprise in the 1980s to Up at the Villa and 21 Grams in the early 21st century. His performances have also run the gamut, but enough Academy voters did like him quite a bit in Dead Man Walking (1995), Sweet and Lowdown (1999), I Am Sam (2001), and Mystic River (2003) – he was a Best Actor Oscar nominee for the the first three titles, and the winner for the last.
Contents hide
1. Sean Penn: Honorary César once again goes Hollywood
1.1. Sean Penn movies
1.2. ‘Taps,’ ‘Fast Times at Ridgemont High’
1.3. Shanghai Surprise
1.4. Sean Penn’s Oscar movies
1.5. Countless awards
1.6. Movies and politics
1.7. Recent films and the upcoming ‘The Gunman’
1.8. Director Sean Penn and Madonna and his politics
1.9. Honorary César winners
1.10. The Honorary César and Hollywood celebrities
1.11. Berlin, Cannes and Venice winners
1.12. ‘Shanghai Madness’

Sean Penn, 54, will receive the 2015 Honorary César (César d’Honneur), the French Academy of Motion Picture Arts and Crafts has announced. That means the French Academy’s powers-that-be are once again trying to make the Prix César ceremony relevant to the American media.

Their tactic is to hand out the career award to a widely known and relatively young – i.e., media friendly – Hollywood celebrity. (Scroll down for more such examples.)

In the words of the French Academy, Honorary César 2015 recipient Sean Penn is a “living legend” and “a stand-alone icon in American cinema.” The Academy has also hailed the two-time Best Actor Oscar winner as a “mythical actor, a politically active personality and an exceptional director.”

Sean Penn movies range from the teen comedy Fast Times at Ridgemont High to the sociopolitical drama Milk. He has been featured in nearly 50 titles in a film career that spans more than three decades.

Penn began acting in front of the camera while still a teenager, landing bit parts in a handful of television productions. According to the IMDb, in the mid-to-late ’70s he could be spotted in the TV series Little House on the Prairie and Barnaby Jones.

In 1981, he was seen in two TV movies, both directed by former blacklisted actors:

A busy television actor and director from the early ’60s to the mid-’90s, Leo Penn was Sean Penn’s father. Among his few big-screen acting credits were a bit part in William Wyler’s The Best Years of Our Lives (1946) and the lead in Reginald Le Borg’s B crime thriller Fall Guy (1947). He died in 1998.

In John Schlesinger’s capable political drama The Falcon and the Snowman (1985), Penn was reunited with fellow Taps player Timothy Hutton. Despite its generally well-received cast, the film was not a success. 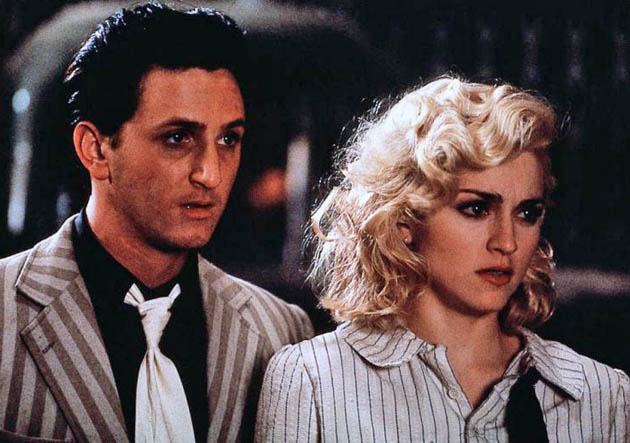 In fact, Penn’s film career would alternate between a few hits and numerous box office duds. Among the latter was Jim Goddard’s Shanghai Surprise (1986), which, despite fierce competition, some consider one of the worst big-budget Hollywood movies of the decade.

In this romantic crime drama with an “exotic” setting, Penn co-starred opposite his then wife. That’s pop singer Madonna.

The following year Penn was seen in a supporting role in Julian Schnabel’s Before Night Falls (2000), starring Javier Bardem. Two years later, he was shortlisted for his third Oscar for I Am Sam (2002). In this Jessie Nelson-directed comedy-drama, he played the mentally handicapped title character. Michelle Pfeiffer co-starred. 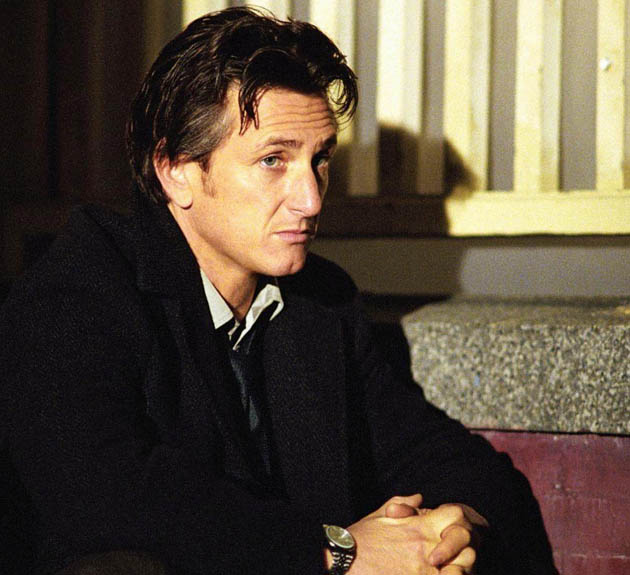 In addition to his three Oscar nods and two wins, Sean Penn has been shortlisted for countless film awards. He has been nominated for five Golden Globes, winning in the Best Actor – Drama category for Mystic River.

He has also been shortlisted for three British Academy Awards, including a double nomination for Mystic River and 21 Grams in 2003. Directed by Alejandro González Iñárritu (up for a Best Director Academy Award this year for Birdman), 21 Grams is a fragmented psychological drama that also features Naomi Watts, Benicio Del Toro, and Melissa Leo. In the film, Penn played a man with little time left to live.

In the U.S., Sean Penn has received Best Actor accolades from numerous critics’ groups. For Milk alone, he was the top choice of the National Society of Film Critics, the New York Film Critics Circle, and the Los Angeles Film Critics Association. (In L.A., Penn also took home the New Generation Award for Rick Rosenthal’s Bad Boys back in 1983.)

In Niels Mueller’s The Assassination of Richard Nixon (2004), he played a character sharing traits with Robert De Niro’s Travis Bickle in Taxi Driver. Naomi Watts was his estranged wife.

Politics is at the very core of Steven Zaillian’s All the King’s Men, the 2006 big-screen version of Robert Penn Warren’s novel about power and corruption that had been previously filmed in 1949. Directed by Robert Rossen, the original All the King’s Men starred Broderick Crawford, Joanne Dru, John Ireland, and Mercedes McCambridge. Rossen’s version ultimately won the year’s Best Picture Academy Award, in addition to earning Oscars for Crawford and McCambridge.

The 2006 All the King’s Men, however, failed to ignite. Despite a stellar cast that also included Kate Winslet, Jude Law, Anthony Hopkins, Mark Ruffalo, Patricia Clarkson, and James Gandolfini, Zaillian and Sean Penn’s remake bombed with both critics and audiences.

The following year, Penn’s voice could be heard in the English-language version of Vincent Paronnaud and Marjane Satrapi’s Persepolis. Based on Satrapi’s series of graphic novels, the film is a coming-of-age tale mostly set in the aftermath of Iran’s Islamic Revolution.

Below: ‘The Gunman’ trailer with Sean Penn and Javier Bardem.

Recent films and the upcoming ‘The Gunman’

Sean Penn was reunited with The Thin Red Line filmmaker Terrence Malick in the 2011 psychological drama The Tree of Life. Co-starring Brad Pitt and Jessica Chastain, The Tree of Life won the Palme d’Or at the Cannes Film Festival and would later be shortlisted for the Best Picture Oscar.

That same year, Penn portrayed a retired rock star in Paolo Sorrentino’s This Must Be the Place.

And last year, he landed a supporting role in Ben Stiller’s The Secret Life of Walter Mitty, starring Stiller (in the old Danny Kaye role) and Kristen Wiig.

Whether or not it’s a mere coincidence, Honorary César 2015 winner Sean Penn will next be seen in a French co-production. In Pierre Morel’s mystery thriller The Gunman, Penn plays a Special Forces operative forced to go on the lam in Europe.

The Gunman is scheduled to open on March 20 in the United States and on June 24 in France.

Director Sean Penn and Madonna and his politics

Sean Penn’s best-known directorial effort is the Best Foreign Film César-nominated drama Into the Wild (2007), toplining Emile Hirsch, Catherine Keener, 2015 Best Supporting Actress César nominee Kristen Stewart,[3] and Hal Holbrook. As mentinoed above, Holbrook had the lead role in The Killing of Randy Webster, back in the days when Penn was a television bit player.

For Into the Wild, Penn was shortlisted for both the Directors Guild and the Writers Guild awards. (The latter nomination was for his adaptation of Jon Krakauer’s book.) In both instances, he lost to Joel and Ethan Coen for No Country for Old Men.

Besides his film work, Penn is also known for his social and political activities. He was an ardent opponent of the Iraq War – at one point, he was compared to Jane Fonda during the Vietnam War. More recently, he has supported causes such as the legalization of gay marriage and relief assistance for post-2010 earthquake Haiti. 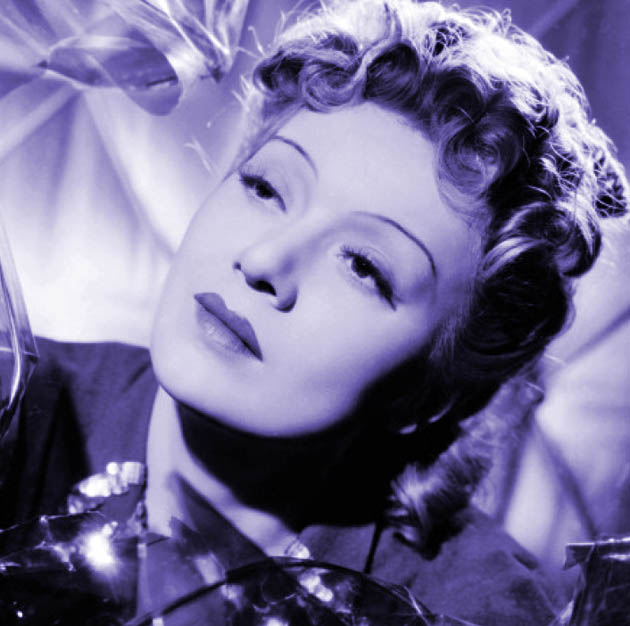 Most other Honorary César winners – in several cases, posthumous honorees – have been either French film personalities or those who have at some time or other made movies in France.

The Honorary César and Hollywood celebrities

From the mid-’70s to the mid-’90s, every other year or so a Hollywood personality would take home the Honorary César. The honorees were usually veterans with decades of film work: Kirk Douglas, Bette Davis, Gregory Peck, Lauren Bacall, and, posthumously, Walt Disney.

The French Academy began honoring younger Hollywood celebrities in 1992, when Rocky and Rambo: First Blood Part II star Sylvester Stallone was given an Honorary César at a ceremony that, somewhat incongruously, also honored veteran actress Michèle Morgan (Port of Shadows, The Fallen Idol), whose prestigious movie credits went all the way back to the mid-’30s.

Between 2003–2015, out of 20 Honorary Césars handed out by the French Academy, no less than 12 have gone to (at least part-time) Hollywood celebrities.

What’s more, to date not a single Honorary César has gone to a non-Hollywood, non-European film personality. In fact, one could add that Pedro Almodóvar and Roberto Benigni are the only Honorary César recipients not to have enjoyed a film career either in France or in Hollywood.

Starring in a Luc Besson film may help a bit. Kevin Costner received the Honorary César the year before he was seen in the Luc Besson-produced 3 Days to Kill. Scarlett Johansson won hers the year she starred in the Luc Besson-directed Lucy. But hey, where’s Liam Neeson?

[2] Besides Sean Penn, those who have won acting awards in the official competitions at Berlin, Cannes, and Venice are:

Jane Birkin Style: To Bare or Not to Bare