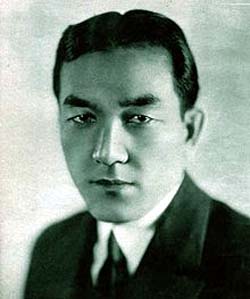 TCM continues with the not-to-be-missed “Asian Images in Film” series, with several silents and a couple of early talkies featuring East Asian characters.

The Cheat is an overwrought melodrama that is a must-see simply because it stars Sessue Hayakawa (right), the first (and only?) Hollywood-made East Asian superstar. Hayakawa is fine as a wealthy – and very kinky – Easterner who teaches a white woman, played by stage star Fannie Ward, who is the master. (Without Hayakawa, the 1931 remake starring Tallulah Bankhead is all but unwatchable.) Later that evening, TCM will also show the 1919 Hayakawa vehicle The Dragon Painter, which I haven’t seen.

Mr. Wu is another over-the-top melodrama, this time featuring Lon Chaney as one more kinky and vengeful East Asian aristocrat, while The Mask of Fu Manchu is a politically incorrect hoot, what with slanted-eyed Boris Karloff and Myrna Loy wreaking more vengeful and kinky havoc on poor white folk. No that Lewis Stone, Charles Starrett, and especially Karen Morley didn’t deserve it.

Now, a kind and unkinky member of the “yellow race” (that’s how they’re referred to in those films) can be found in the person of white-race member Richard Barthelmess in D.W. Griffith’s sentimental but touching Broken Blossoms. Barthelmess is superb as the young Chinese immigrant who’ll sacrifice it all for the sake of Lillian Gish’s suffering maiden, while Danish-born Nils Asther is quite good as the Chinese general who discovers in The Bitter Tea of General Yen that loving a white woman (Barbara Stanwyck) is dangerous business.

Several B-grade John Derek (photo, below right) flicks are hardly what I’d call highlights, but they may be worth a look, while The Big Boodle merits mention if only because it was one of Errol Flynn’s last films.

3:00am Family Secret, The (1951)
When his son accidentally kills someone, a lawyer must defend the man wrongly charged with the murder.
Cast: John Derek, Lee J. Cobb, Jody Lawrance. Director: Henry Levin. Black and white. 85 mins

4:35am [Short Film] Short Film: One Reel Wonders: Roaming Through Arizona (1944)
This “Traveltalk” explores about the history, land, people, and culture of Arizona.
Cast: James A. Fitzpatrick C-9 mins

4:45am Mask of the Avenger (1951)
When his father is murdered, an Italian nobleman becomes an outlaw to avenge the crime.
Cast: John Derek, Anthony Quinn, Jody Lawrance. Director: Phil Karlson. Color. 83 mins

12:00pm Rebellion of the Hanged, The (1954)
The miserable conditions at a mahogany camp in the Mexican jungle lead the workers to revolt.
Cast: Pedro Armendariz, Carlos Moctezuma, Victor Junco. Director: Alfredo Crevenna. Black and white. 82 mins

There’s quite a bit to recommend:

The thriller Targets was one of Peter Bogdanovich’s first and one of Boris Karloff’s last movies; The Won’t Forget deals with bigotry in the American south after Lana Turner gets bumped off, purportedly at the hands of a Jewish businessman; and Mary Stevens, M.D. is a pre-Coder starring the stunning-looking Kay Francis.

Sabotage / A Woman Alone is a British-made Alfred Hitchcock curiosity involving terrorism and spies; the film noir In a Lonely Place gave Gloria Grahame (top photo, with Humphrey Bogart) one of her first (and few) leads; and George Stevens’ The Talk of the Town is one of the cleverest comedies of the 1940s, providing Ronald Colman and Jean Arthur with some of the best comedic opportunities of their careers.

The Sophia Loren films are a mixed bag, but the light comedy Too Bad She’s Bad is worth watching if only to see Loren, playing a shameless thief, before she became an international star. The Italian title, Peccato che sia una canaglia, literally translates as “What a Sin That She’s a Crook.”

3:30am [Documentary] MGM Parade Show #7 (1955)
Ray Bolger performs in a clip from “The Great Ziegfeld”; Debbie Reynolds introduces a clip from “The Tender Trap.” Hosted by George Murphy. Black and white. 26 min.

7:00am In a Lonely Place (1950)
An aspiring actress begins to suspect that her temperamental boyfriend is a murderer.
Cast: Humphrey Bogart, Gloria Grahame, Frank Lovejoy. Director: Nicholas Ray. Black and white. 93 min.

8:35am The Chimp (1932)
A jealous husband thinks two tenants sneaking a pet chimp into their apartment are carrying on with his wife.
Cast: Stan Laurel, Oliver Hardy, Billy Gilbert. Director: James Parrott. Black and white. 25 mins

Doris Day and Anna May Wong on Turner Classic Movies

Love Me or Leave Me is a competent biopic, with Doris Day giving a capable performance as torch singer Ruth Etting, while Johnny Belinda is an underrated psychological drama – one that features a then scandalous rape scene – that boasts an excellent star turn by Jane Wyman, who deservedly won a best actress Oscar. (Not that Irene Dunne in I Remember Mama didn’t deserve an Oscar as well.)

Based on Leon Uris’ novel about the founding of the state of Israel and adapted by blacklisted screenwriter Dalton Trumbo, Exodus is quite probably Otto Preminger’s worst movie. It’s worth a look solely for the – unintentionally funny – scene in which Sal Mineo explains that concentration camp guards had used him as one uses a woman! That’s how bad it is.

The Anna May Wong films are a must, if only because, well, Anna May Wong is in them. She’s actually quite good as a mysterious train rider in the highly stylized melodrama Shanghai Express, just about stealing the show from fellow train rider and classy prostitute Marlene Dietrich.

Wong is a capable villainess in Daughter of the Dragon, but the film is nothing more than a historical curiosity as it provided Sessue Hayakawa with one of his few roles in Hollywood talkies. As for The Toll of the Sea, it is an early two-strip Technicolor drama about an interracial romance, while Old San Francisco offers a good earthquake sequence and Dolores Costello’s loveliness.

More information on Wong can be found at the Anna May Wong Society.

7:45am Love Me Or Leave Me (1955)
True story of torch singer Ruth Etting’s struggle to escape the gangster who made her a star.
Cast: Doris Day, James Cagney, Cameron Mitchell. Director: Charles Vidor. Color. 122 mins. Letterbox.

4:00pm Anna May Wong-Frosted Yellow Willows: Her Life, Times and Legend (2008)
A documentary on the life and career of pioneering Chinese-American actress Anna May Wong.
C-50 mins

7:45pm Piccadilly (1929)
In this silent film, the dancers at a London nightclub get wrapped up in jealousy and murder.
Cast: Gilda Gray, Jameson Thomas, Anna May Wong. Director: E.A. Dupont. Black and white. 109 min.

12:30am Anna May Wong-Frosted Yellow Willows: Her Life, Times and Legend (2008)
A documentary on the life and career of pioneering Chinese-American actress Anna May Wong.
C-50 mins

Third tale of ‘Yesterday, Today and Tomorrow'(1963): Rusconi is a guy who howls in front of Mara engaged with her strip-tease. Before he howls, his businessman dad has already howled to him on the phone to corrupt a politician. Two men very busy enjoying strip-teases.