‘Shane’: Alan Ladd stars in classic Western to be screened at the Academy

The Academy of Motion Picture Arts and Sciences will present a 60th anniversary screening of George Stevens’ classic Western Shane, starring Alan Ladd as a lone and mysterious gunslinger, at 7:30 p.m. on Monday, Oct. 7, at the Samuel Goldwyn Theater in Beverly Hills. Besides Ladd, Shane, a 1953 Paramount release, also stars Jean Arthur in her last movie role, in addition to Van Heflin, Brandon De Wilde, and Jack Palance.

“A gun is a tool, Marian, no better or no worse than any other tool, an axe, a shovel or anything,” Alan Ladd’s Shane tells Jean Arthur’s homesteader wife and mother. “A gun is as good or as bad as the man using it. Remember that.”

That may sound like your usual National Rifle Association bullshit, but in the hands of Shane producer-director George Stevens and screenwriter A.B. Guthrie Jr., who adapted Jack Schaefer’s 1949 novel (with additional dialogue by Jack Sher), a gun is ultimately proven to be a much more complex “tool” than any axe or shovel could ever be – its effects immeasurably longer lasting and farther reaching, whether the man pulling the trigger is a “good” or a “bad” one.

Shane‘s basic storyline is quite simple and hardly original: in mid-19th-century Wyoming, the boy Joey (Brandon De Wilde), son of homesteader Van Heflin and wife Jean Arthur, worships Alan Ladd’s mysterious gunslinger Shane, recently arrived in the area. Shane has no past, no destination, and no family name, but none of that prevents him from siding with the “common folk” against a greedy, ruthless cattle baron (Emile Meyer) and his henchmen (among them a bloodthirsty Jack Palance).

Now, what makes Shane special is that while Stevens and Gurthrie Jr.’s movie feels like a paean to the Old West and to Western movies in general, it actually demythologizes both American history and the film genre that turned into stars the likes of Tom Mix, John Wayne, Gene Autry, Roy Rogers, and, later on, Clint Eastwood. Read between the lines and you’ll see how subversive Shane is – how unheroic its heroes are, how complex the lives and minds of its “common people,” how civilization can be just another manifestation of barbarism; and, no matter their righteousness, how hollow human victories can be.

‘Shane’: Six Academy Award nominations – but none for Alan Ladd or Jean Arthur

Though hardly an iconic classic like other 1950s Hollywood fare such as John Ford’s The Searchers, Alfred Hitchcock’s Vertigo, Elia Kazan’s On the Waterfront, or Zinnemann’s aforementioned From Here to Eternity, I find Shane – despite several flaws, including some corny dialogue and excessive running time – superior to all of them.

And when it comes to my admiration for Shane, I’m in renowned company. Woody Allen has remarked on the film’s “poetry and elegant flow,” while in George Stevens: A Filmmaker’s Journey, Warren Beatty discusses Shane‘s influence on Bonnie and Clyde – you won’t think of axes and shovels when you hear guns go off in either movie. 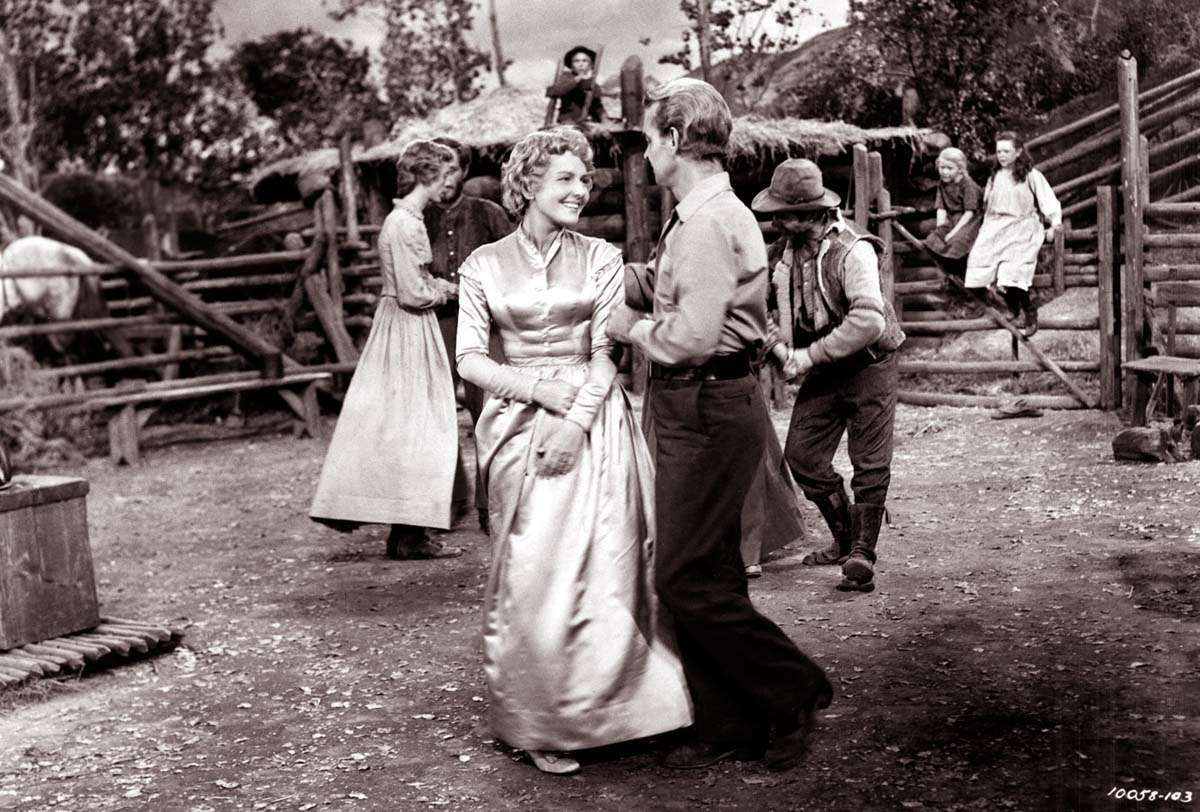 my dad took me to see this in the fifties. he told me it would be the best western that i would ever see, he was right. alan ladd was never more beautiful. it’s hard to believe watching this that he was not even given a nomination. his acting was so low keyed, leaving you to know that he was always in control. even as he tells jack palance( so evil) that he was a dirty yankee liar. van heflin was a perfect foil. so everyman. the cinematograpy in itself was a character. since it never tells if shane is dying or not, when he rides out it’s through the cemetary. one way or another his time is done. watch this every time it’s on and think of my father.