Sherlock Holmes, a long-thought-lost 1916 feature starring stage performer and playwright William Gillette in the title role, has been discovered in the vaults of the Cinémathèque Française. Directed by the all-but-forgotten Arthur Berthelet for the Chicago-based Essanay production company, the approximately 90-minute movie is supposed to be not only the sole record of William Gillette’s celebrated performance as Arthur Conan Doyle’s detective but also the only surviving Gillette film.[1]

In the late 19th century, William Gillette himself wrote the play Sherlock Holmes, which turned out to be a mash-up of various stories and novels featuring the detective, chiefly the short stories “A Scandal in Bohemia” and “The Final Problem.” (“May I marry Holmes?” Gillette, while vying for the role, telegraphed Conan Doyle. The latter replied, “You may marry or murder or do What you like with him.”) As per the IMDb, the Sherlock Holmes movie scenario was credited to playwright and screenwriter H.S. Sheldon.

William Gillette, for his part, is credited for the line “Oh, this is elementary, my dear fellow,”[2] and for popularizing what The Guardian describes as Holmes’ “deerstalker-and-cape image,” which is supposed to have been first seen in an 1891 illustration by Sidney Paget for the short story The Boscombe Valley Mystery and later in illustrations by Frederic Dorr Steele. Gillette, it should be noted, was in his early 60s when his film version of Sherlock Holmes reached the screen.

According to Cinémathèque Française film collection director Céline Ruivo, William Gillette’s Sherlock Holmes movie was found – or rather, properly identified – after a staff member discovered it “mistakenly put with some other Sherlock Holmes films.” Ruivo adds that the film, which has French intertitles, “was to be tinted for the French market, we think, so it was [stored] in small rolls to make it easier to color.” (Curiously, according to the Cinemathèque, Essanay movies were rarely tinted for the American market.)

In a joint effort between the Cinémathèque Française and the San Francisco Silent Film Festival, Sherlock Holmes is being restored in Bologna. The restored print will premiere at the Cinémathèque Française’s Festival Toute la Mémoire du Monde in January 2015; next in line will be the U.S. premiere at the San Francisco Silent Film Festival in May.

Besides William Gillette, the 1916 Sherlock Holmes movie features Marjorie Kay as Alice Faulkner, Ernest Maupain as Professor Moriarty, and Edward Fielding as Dr. Watson. The film comprises four sequences: The Letters of the Heir Apparent, Moriarty Against Sherlock Holmes, A Tragic Night, and The Triumph of Sherlock Holmes.

Of note, another William Gillette play adapted for the screen was Too Much Johnson. Besides a 1919 version starring Bryant Washburn and Lois Wilson,[3] Too Much Johnson was Orson Welles’ first film effort. Long thought lost, the experimental 1938 comedy was found six years ago in a warehouse in Pordenone, Italy.

The Cinémathèque Française is currently cataloguing 80,000 boxes of nitrate films. Who knows, perhaps a few more unexpected discoveries will be announced in the near future. 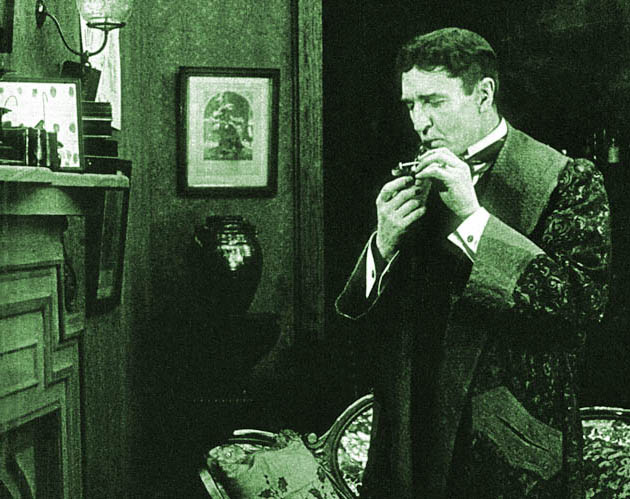 For those who think that movies were born the year George Lucas made Star Wars – or worse, the year Peter Jackson made The Lord of the Rings: The Fellowship of the Ring – cinema’s most famous Sherlock Holmes is Robert Downey Jr., the star of two recent worldwide blockbusters: Sherlock Holmes (2009) and Sherlock Holmes: A Game of Shadows (2011).

Those aware of cinema’s pre-CGI history, however, know that long before Robert Downey Jr was born, Basil Rathbone was starring in no less than 14 Sherlock Holmes films – e.g., Dressed to Kill, The Pearl of Death, The Spider Woman – mostly at Universal. Nigel Bruce played his sidekick Dr. Watson (Jude Law in the Robert Downey Jr. movies).

Among the movies’ other incarnations of Arthur Conan Doyle’s detective are the following:

On TV, the most famous ones are probably Benedict Cumberbatch in the BBC series Sherlock and Jeremy Brett, who starred as Holmes on British television from 1984 to 1994.

[1] According to the IMDb, William Gillette was featured in only three movies: The Battle at Fort Laramie (1913), The Delayed Special (1914), and Sherlock Holmes.

[2] In William K. Howard’s 1932 movie version of Sherlock Holmes – the first talkie featuring the detective – Clive Brook says instead “Elementary, my dear Watson,” which went on to become the standard Holmes remark. Bertram Millhauser was credited for the adaptation of William Gillette’s play.

[3] Lois Wilson played Daisy Buchanan in the – for the time being – lost 1926 The Great Gatsby, directed by Herbert Brenon, and starring Warner Baxter in the title role.

Images of William Gillette in the 1916 film via the Cinémathèque Française.

Where can this film be seen?