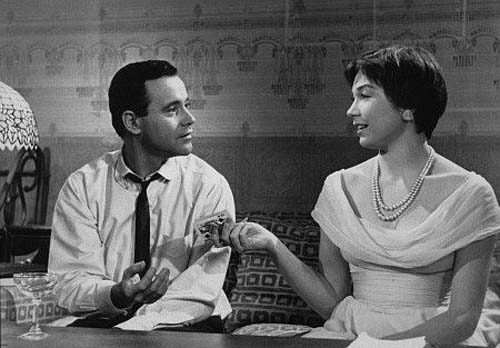 Shirley MacLaine is Turner Classic Movies’ “Summer Under the Stars” star of the day today, August 10. This evening, TCM is presenting its last four Shirley MacLaine movies: Billy Wilder’s Oscar winner The Apartment (1960), which is on right now; Vincente Minnelli’s Some Came Running (1958), which earned MacLaine her first Best Actress Academy Award nomination; Lewis Milestone’s Ocean’s Eleven (1960), in which MacLaine has a mere cameo; and Anthony Asquith’s omnibus feature The Yellow Rolls Royce (1964), in which MacLaine is one of about a dozen stars in several individual stories. (See Shirley MacLaine Movies’ TCM schedule further below.)

It’s too late for me to recommend The Apartment, though recommendable it is. For one thing, this collaboration between Billy Wilder and screenwriter I.A.L. Diamond features what is, in my view, Fred MacMurray’s best performance by far. Usually an intolerable leading man – macho, reactionary, humorless, unsexy, dull – MacMurray could be a fascinating slimeball, as is the case in The Apartment.

Some Came Running is pure melodrama. MacLaine has some good moments, while Dean Martin received what may have been the best reviews of his career for his performance as a professional gambler. Personally, I’d rather watch Best Supporting Actress nominee Martha Hyer, as the beautiful woman from the right side of the tracks. Arthur Kennedy was another cast member who earned an Oscar nod, in the Best Supporting Actor category; he lost to Burl Ives in The Big Country. (Hyer lost to Wendy Hiller in Separate Tables; MacLaine lost to Susan Hayward in I Want to Live!) Frank Sinatra is in this one, too.

Ocean’s Eleven is worth watching merely so people can compare it to the George Clooney-Brad Pitt-Matt Damon 2001 remake directed by Steven Soderbergh. Else, it’s basically a waste of time, apart from a few celebrity cameos, including those of MacLaine, George Raft, Red Skelton, and early cowboy star Hoot Gibson. And to think that Lewis Milestone was the same guy who had directed All Quiet on the Western Front three decades earlier.

The Yellow Rolls Royce. Anthony Asquith’s movies could be quite good, even if a bit stately at times. Asquith had luck at the international box office with the all-star The V.I.P.’s in 1963, but, commercially speaking, lightning didn’t strike twice for him when The Yellow Rolls Royce was released the following year.