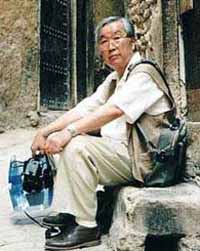 Two-time Palme d’Or-winning filmmaker Shohei Imamura died in Tokyo on May 30. The 79-year-old Japanese filmmaker had been suffering from liver cancer.

Born in Tokyo in 1926, Imamura entered a technical school in order to avoid being drafted into Japan’s Imperial Army. His studies at the renowned Waseda University were followed by work as an assistant director to the likes of Yasujiro Ozu (in Tokyo monogatari / Tokyo Story, 1953) and Kinuyo Tanaka (in Tsuki wa noborinu / The Moon Has Risen, 1955).

Imamura, often writing his own screenplays, began working as a full-fledged feature-film director in 1958. His socially conscious films frequently focused on those at the bottom of Japan’s rigid social structure, and featured sex as a major topic. Among those are Nippon konchuki / The Insect Woman (1963), Jinruigaku nyumon: Erogotshi yori / The Pornographers (1966), and the documentaries Nippon Sengoshi – Madamu onboro no Seikatsu / History of Postwar Japan as Told by a Bar Hostess (1970) and Karayuki-san, the Making of a Prostitute (1975). In Karayuki-san, the director portrays the fate of Japanese women sent as prostitutes to southeast Asia, where they served as entertainment to the country’s troops.

Imamura’s two Cannes wins were for Narayama bushiko / The Ballad of Narayama — probably his best-known film –in 1983, and for the psychological drama Unagi / The Eel, which shared the Palme d’Or with Abbas Kiarostami’s Ta’m e guilass / Taste of Cherry in 1997. Set in a remote village, The Ballad of Narayama shows how one family is affected by social rules stipulating that the elderly must be left to die in order to preserve food for the young.

Among his other notable films of the last two decades are the slow-moving but quite disturbing Kuroi ame / Black Rain (1989), which depicts in graphic detail the aftermath of the Hiroshima atomic bombing, and Akai hashi no shita no nurui mizu / Warm Water Under a Red Bridge (2001), his last feature film.

Recommended for You
Yasujiro Ozu