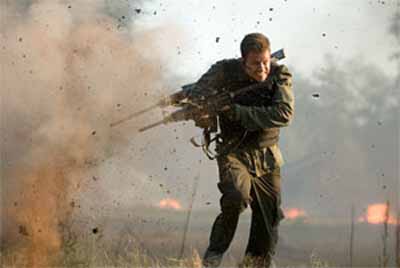 Shooter movie: A graduate of the George W. Bush School of Peace and Democracy, Mark Wahlberg gives a demonstration of his skills as global peacemaker.

When former marine corps scout sniper Bob Lee Swagger is called to Washington to come up with a carefully detailed plan to shoot the U.S. president – so as to thwart a real assassination attempt – he believes he’s doing his country a favor by leaving his Wyoming outpost in the mountains to accept the assignment. Of course, anyone with half – actually, make it one-tenth or one-hundredth or one-millionth – of a brain would have known that you don’t put in motion faux assassinations down to the minutest detail in order to save the prospective victim. In other words, when Swagger accepts the assignment he’s merely doing a favor to the Shooter filmmakers and to those who like their conspiracy thrillers to make little sense, to have no suspense, to be obscenely violent, and to be populated by cardboard characters doing one dumb thing after another.

Based on the novel Point of Impact by Washington Post film critic Stephen Hunter, Shooter was adapted to the screen by Jonathan Lemkin, who drastically condensed Hunter’s web of intrigue by focusing on only one segment of one of the novel’s half a dozen or so storylines. (Lemkin was one of 8 writers who worked on the adaptation; following arbitration, he received sole screen credit because he was the only adapter who developed that one single “essential element” from the novel.)

Lemkin also updated the book’s post-Vietnam setting to the realities of the early 21st century: Corporate greed, government and military corruption, human wickedness. So, nothing has changed in the last thirty – or 50 or 100 – years except for the fact that Hollywood mainstream movies have gotten dumber, louder, and bloodier.

In North by Northwest, Cary Grant is accused of a murder he didn’t commit. There are spies, intrigue, one beautiful woman, and lots of running around, but director Alfred Hitchcock and screenwriter Ernest Lehman’s film also had humor, at least a modicum of intelligence, a cast that included Grant, Eva Marie Saint, James Mason, and Jessie Royce Landis, and perhaps most importantly, that action-thriller never took itself too seriously. Thus, its myriad plot holes and absurdities weren’t offensive. In fact, they were part of the fun.

If only Lemkin and director Antoine Fuqua had opted for the same approach. Unfortunately, just about everyone in Shooter takes himself much too seriously without any reason to do so.

Poor Bob Lee Swagger. For mysterious reasons, his own government had left him to rot in some no man’s land in Ethiopia where his sniper bud had just got gunned down. We learn that Bob Lee somehow managed to reach civilization, received some military honor or other, and then put on civilian clothes, grew a pony tail, and moved to the Rocky Mountains where he led a serene life with his beer-drinking dog.

Three years later, enter those damned government agents who want this “man with a history of duty and patriotism” to plan the aforementioned faux assassination, for Bob Lee is an ace when it comes to long-range weapons. The guy is so good that from his Wyoming mountaintop he can hit a microbe crossing an intersection in Brooklyn.

Once the plan has been put in motion, someone fires a real shot. The president escapes intact, but a visiting Ethiopian bishop is not so lucky. Almost equally unlucky is poor Bob Lee, who must now – literally – run, drive, swim, and jump for his life. Compounding matters, he’s been shot twice. And he’s accused of the attempted assassination. And he’s stupid.

Well, perhaps not that stupid – I mean, even really stupid people will eventually learn as long as they have a screenwriter guiding their actions.

Lemkin has said that his screenplay was initially a conspiracy thriller à  la Three Days of the Condor, but Paramount dumped money into the production to create more – and more and more – action scenes. The result is considerably more Rambo than The Day of the Jackal, as whole chunks of the original plot had to be excised to make way for explosions, gun battles, and car chases. That’s both disappointing and irritating, as Shooter clearly had the potential to be an intelligent and realistic thriller with a subversive – i.e., honest – approach to the current political climate. Stephen Gaghan’s Syriana was an honorable failure in that regard, but Shooter hardly ever bothers to bring even a semblance of reality to the proceedings. When we finally learn who is behind the plot against Bob Lee (and why), it’s too late in the videogame for anyone to care.

Despite a few earnest stabs at sociopolitical commentary, Lemkin’s dialogue is much too silly and his situations much too contrived to generate more than a tenuous connection between what is depicted on screen and what takes place in the real world. Worse yet, Fuqua’s direction emphasizes the basest elements of the script. Besides making sure we get to see assorted human heads get blown up at different angles, the director of the equally inane and violent Training Day glorifies Bob Lee’s quick-on-the-trigger finger by having his camera worship star Mark Wahlberg holding his big, thick, long, lethal weapon.

As Bob Lee – a genius when it comes to measuring the effects of the wind on a flying bullet; a moron when it comes to just about everything else – Mark Wahlberg delivers a performance consisting of steely stares, semi-whispers, and great abs. (Bob Lee apparently acquired his six-pack stomach by wrestling with his dog for the nearest beer cooler, since there’s no gym in sight atop those Wyoming mountains.) Wahlberg must also be commended for keeping a straight face during the film’s most ludicrous moments, including a scene in which poor Bob Lee must care for his open wounds while hiding in a public toilet.

Elsewhere, most supporting players give performances ranging from the mechanical (Danny Glover) to the burlesque (Elias Koteas). Michael Peña, however, is a believable Federal Bureau of Ineptitude klutz, while Kate Mara, a lovely movie star in the making, is fully convincing in a minor role as Bob Lee’s romantic interest. (In one scene, Mara looks like a darker, even more stunning version of 1940s Paramount star Veronica Lake.)

But Ned Beatty’s crooked senator is the one who steals every scene in which he appears. During the precious few moments when the veteran Beatty is given the chance to strut his stuff, Shooter stops being a widescreen videogame and becomes a real movie. His senator is so deliciously twisted – think of his roles in Deliverance (post-rape) and Network melted into one – this audience member was rooting for him to do away with the nominal hero, and quick.

Beatty, in fact, delivers the film’s best – even if somewhat heavy-handed – lines, e.g. (paraphrasing a bit), “There are no Republicans, there are no Democrats; there are no Sunnis, there are no Shiites; there are only haves and have-nots.” Yet, those subversive tidbits found in the screenplay are not only neutralized but outright denied by an appallingly dishonest, pro-vigilantism, feel-good denouement. (This was one of several prospective endings, two of which were shot.) One man can change the world, we’re told, as long as he has the right weaponry, a little napalm, and a house in the Wyoming mountains waiting for him.

Ultimately, if there’s a truly valuable lesson to be learned from Shooter it’s that, in the movies as in life, one man (or woman) can indeed make a difference. As Fuqua and Lemkin’s film unwittingly demonstrates, the world would have been a better, safer place had one U.S. military man stayed home playing with his dog.

Michael Jackson Kids & Family + Mansion Images + This Is It Rehearsal