Steve Montgomery 12 years ago
Sibel Kekilli in Feo Aladag’s When We Leave.

In When We Leave, Sibel Kekilli, the star of Fatih Akin’s 2004 European Film Award winner Head-On, plays a determined Turkish woman who flees her abusive husband in Istanbul, settling with her five-year-old son in Berlin. Once there, she finds herself at odds with her traditionalist Muslim family.

Kekilli, who was nominated for this year’s German Film Award, also won the best actress award at the Tribeca festival.

Alexandra Codina’s Monica & David, about a love affair between two people with Down syndrome, was chosen as the best documentary. (Codina is the cousin of the film’s Monica.) The Special Jury Mention went to Julia Bacha’s Budrus.

The best actor award was given to Eric Elmosnino for his portrayal of Serge Gainsbourg in Gainsbourg (Vie héroïque) / Gainsbourg, Je t’Aime … Moi Non Plus, which also stars Lucy Gordon, who killed herself last year, as Gainsbourg’s wife Jane Birkin; Laetitia Casta as Brigitte Bardot; and Anna Mouglalis as Juliette Greco.

Among the other filmmakers honored at Tribeca were newcomers Kim Chapiron, who directed the youth correctional facility drama Dog Pound, and Clio Barnard, for the British mix of documentary and fiction, The Arbor.

Freakonomics, directed by Heidi Ewing, Alex Gibney, Seth Gordon, among others, will be Tribeca’s closing-night film on Friday.

The 2010 Tribeca Film Festival Virtual winners were voted on by the TFF Virtual Premium passholders.

Teddy Chen’s Bodyguards and Assassins was the big winner at the 2010 Hong Kong Film Awards, held on Sunday. Set in the early years of the 20th century, the action thriller with political undertones – and a national blockbuster ($44 million) – received a total of eight awards, including Best Picture, Best Director, and Best Supporting Actor (Nicholas Tse).

Other Hong Kong Film Award top winners included Best Actress Wai Ying-Hong, who plays a single mother whose son is accused of rape in At the End of Daybreak, and writer-director Alex Law, who won the Best Screenplay award for Echoes of the Rainbow, a family drama about a poor parents caring for their cancer-stricken son in 1960s Hong Kong.

Other Echoes of the Rainbow winners were veteran Simon Yam, voted Best Actor for his performance as a hardworking cobbler (Yam had also been in the running for his murderous family man in Night and Fog); Aarif Lee, chosen as the year’s best new actor; and the title song, which happens to be performed by Lee.

The Best Supporting Actress was Michelle Ye for her gang member in Accident. The Academy Award-winning Japanese drama Departures was voted the Best Asian Film.

Veteran Wai Ying-Hong had previously won both the Golden Horse and the Asian Film Award for Best Actress. Wai had recently suffered a career downturn and had been battling depression.

“I’m not ashamed to tell you that I had at one point given up on my life,” Wai, fighting away the tears, told the crowd. “I really couldn’t see how my future would pan out. But now I’m very confident. I know I belong to the movies. I know I belong to acting.”

The Hong Kong Film Award ceremony also included a tribute to Bruce Lee, who would have turned 70 next November, and a moment of silence in honor of the victims of last week’s earthquake in China’s Qinghai province.

Best actress: Wai Ying-Hong, At the End of Daybreak 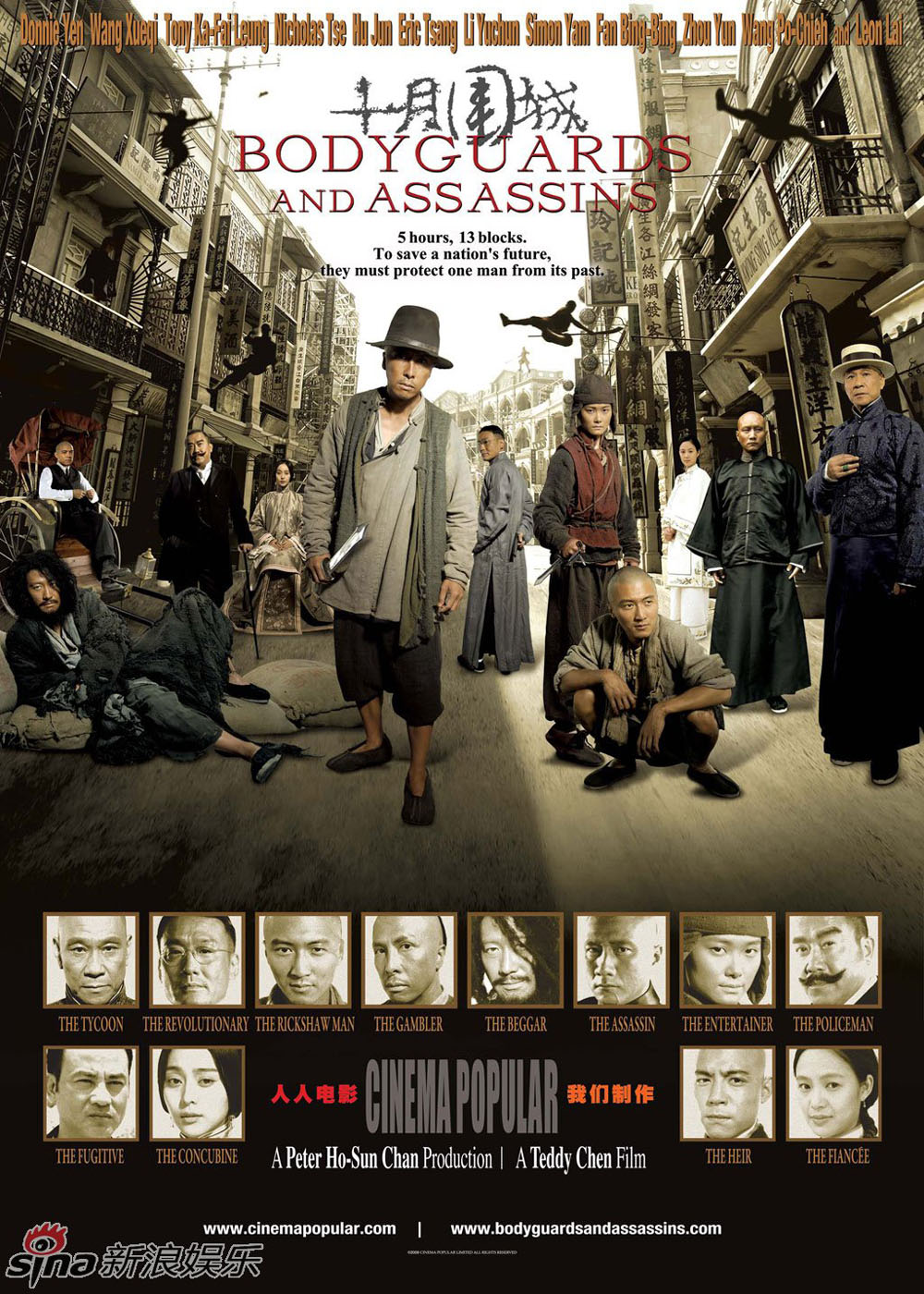 The Hong Kong Film Award winners will be announced on April 18.

According to Agence France-Presse, Bangladesh has lifted a four-decade ban on Indian films. Some Bangladeshi actors and technicians may be none too happy, as they dislike competition just like most everybody else – Hollywood included. Bangladeshi movie theater owners, however, are ecstatic.

In fact, exhibitors were the ones who pressured the Bangladeshi government to end the ban, which began in 1972, the year following the country’s independence. (For those who don’t know; Bangladesh and Pakistan used to be one country. The whole thing goes back all the way to the British Raj and a bloody legacy of colonialism mixed with tribalism.)

Instead of protesting and trying to prevent the opening up of Bangladeshi screens to Bollywood movies (which can be seen on local television), local talent should join forces with the “enemy.” It would then be a win-win situation.

Laxmikant Shetgaonkar’s The Man Beyond the Bridge (above), with dialogue in the native tongue of Konkani (Goa region), a language little used in Indian cinema, took top honors at the 2010 Indian Film Festival of Los Angeles (website).

The winner of the Grand Jury Prize for Best Narrative Feature The Man Beyond the Bridge tells the story of Vinayak, a lonely forest ranger who befriends a mute madwoman who roams the area. Meanwhile, he must deal with local villagers who have been cutting down trees so as to build a shrine. Last year, The Man Beyond the Bridge won the FIPRESCI Prize for Discovery at the 2009 Toronto Film Festival.

Dilip Mehta’s feature-film debut Cooking with Stella received an Honorable Mention in the Narrative Feature category. Deepa Mehta, Dilip’s sister and the director of the Academy Award-nominated Water, co-produced this comedy about a scheming cook (Seema Biswas) and a diplomat’s husband who wishes to learn her culinary secrets.

More than 7,000 moviegoers attended the screenings at ArcLight Hollywood, which included the international director’s cut of Shahrukh Khan’s Bollywood blockbuster My Name Is Khan.

Jury members for the Short Film category were writer/ director Rajeev Dassani, actress Navi Rawat, and Kim Yutani, film critic and film programmer for the Sundance Film Festival and the Director of Programming of Outfest.

DOCUMENTARY: THE SUN BEHIND THE CLOUDS: TIBET’S STRUGGLE FOR FREEDOM
DIR: Ritu Sarin and Tenzing Sonam

Photos: My Name Is Khan (20th Century Fox); The Man Beyond the Bridge (Indian Film Festival of Los Angeles)

Amitabh Bachchan, one of Bollywood’s iconic figures, announced on Tuesday, April 20, that the International Indian Film Academy’s film festival and awards ceremony will be held in Colombo, Sri Lanka, June 3–5.

That’s where Bollywood’s superstars will be seen next, following IIFA festivals in places as diverse as Macao, the UK, and South Africa.

Bachchan explained that the festival is held in different countries each year so as to promote both Indian cinema and cultural integration.

IIFA events in Colombo will also include a business forum, fashion show and a cricket match featuring both Indian and Sri Lankan film and cricket stars.

Sri Lanka is still suffering from the lingering effects of a 25-year civil war against the Tamil Tigers. Fighting officially ended last year.

go to yahoo videos and enter Sibel Kekilli. Some great videos. My fav a 21 minute compilation of happy endings from all her scenes. this fine lady was quite the “actress” before she became an actress.