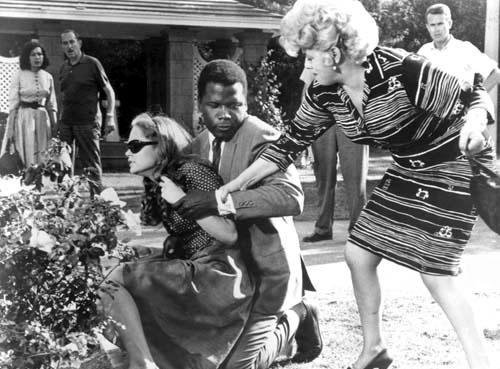 Sidney Poitier, Elizabeth Hartman, and Shelley Winters in A Patch of Blue.

Sidney Poitier’s “Summer Under the Stars” day is Friday, Aug. 14.

Turner Classic Movies will have no Sidney Poitier premieres, but fans of the groundbreaking actor will have the opportunity to catch him in some of his most important roles.

Poitier’s acting always looked and sounded like Acting (capital “A”) to me, while the characters he played tended to be much too stolidly dignified for my taste. Had I been Spencer Tracy in Guess Who’s Coming to Dinner I’d have told my daughter to go find herself someone – whatever the skin color – less one-dimensionally perfect. And that’s why I’ve never been a Sidney Poitier fan. Yet Poitier’s crucial role in film history is undeniable. Therefore, those unfamiliar with his work should check it out.

Guess Who’s Coming to Dinner may have been criticized for being saccharine and phony, but I actually enjoy Stanley Kramer’s socially conscious dramatic comedy despite Poitier’s goody-goodiness. The reason for my enjoyment is simple: Spencer Tracy and, especially, Katharine Hepburn are great as the befuddled parents of a white girl (Hepburn’s niece Katharine Houghton) who is about to marry a black doctor. Beah Richards is equally excellent as the groom-to-be’s mother.

James Clavell’s To Sir, with Love may have been criticized for being saccharine and phony (does this sound familiar?), but I actually enjoy this melodrama about a black teacher who gives lessons in civility to his rowdy white pupils at a London school. Judy Geeson is good as the girl who develops a crush on the teacher, while Lulu gets to sing the title song and shed a tear or two.

Loretta Young was offered the role of the chief nun in Lilies of the Field, but the part eventually went to Lilia Skala, who earned an Oscar nomination for her troubles. (Young later lamented the fact that she didn’t get to play opposite Poitier.) In this saccharine and phony drama (one that I found unbearable), Poitier is a handiman who helps several elderly nuns build a chapel in the American South. The actor won an Oscar for his Acting in the year that Richard Harris delivered an electrifying performance as a complex rugby player in This Sporting Life.

A Patch of Blue, Paris Blues, and The Long Ships aren’t much better than Lilies of the Field, but at least Jack Cardiff’s viking adventure tale is nice to look at.

9:00 AM Something Of Value (1957)
Childhood friends end up on opposite sides of a bloody African uprising. Cast: Rock Hudson, Sidney Poitier, Wendy Hiller. Director: Richard Brooks. Black and white. 114 min.

7:15 PM Lilies of the Field (1963)
An itinerant handyman in the Southwest gets a new outlook on life when he helps a group of German nuns build a chapel. Cast: Sidney Poitier, Lilia Skala, Lisa Mann. Director: Ralph Nelson. Black and white. 94 min.

9:00 PM Buck and the Preacher (1972)
A con man helps a group of former slaves survive the perils of the wild West in their search for the promised land. Cast: Sidney Poitier, Harry Belafonte, Ruby Dee. Director: Sidney Poitier. Color. 103 min.

1:00 AM Brother John (1971)
A man returns to Earth as an angel to intervene in a small-town labor strike. Cast: Sidney Poitier, Will Geer, Bradford Dillman. Director: James Goldstone. Color. 96 min.

Lielies of the Field is a very VERY touching movie. Poitier DESERVED the Oscar he won.