“Spring had just begun along the beautiful peninsula and they were after Berlusconi. It was a shitty day like so many others …” the narrator explains in the clip above from 46-year-old standup-comic-turned-director Sabina Guzzanti’s Draquila: L’Italia che trema / Draquila: Italy Trembles. Italy’s finances were (and still are) in turmoil and right-wing prime minister-businessman Silvio Berlusconi was embroiled in a series of nasty corruption and sex scandals – the latter involving teenage women.

But then God came to Berlusconi’s rescue by making the earth shake underneath the medieval mountain town of L’Aquila. The devastating April 6, 2009, earthquake left 308 people dead and 80,000 homeless. It also gave Berlusconi the chance to recover from his recent scandals. How? By putting on the mantle of The Savior.

While tens of thousands of former L’Aquila residents were living in far-away quarters under military rule, Berlusconi was hosting a G8 meeting in the then resurgent town. Except, of course, that the resurgence has never taken off.

According to an Agence France Presse report, L’Aquila remains a ghost town guarded by Italy’s military, while its former residents have been moved to lodgings far from their city and at three times the estimated cost.

Draquila was shown out of competition at the Cannes Film Festival on Thursday, where it received a round of applause at the press screening. “A tragic earthquake, shocking corruption and massive abuse of power,” Variety wrote about Guzzanti’s Michael Moore-ish documentary. “Even for Italians accustomed to their country’s scandals, Draquila is a kick in the gut.”

Not everyone is in agreement with that assessment. Referring to Draquila as a “a propaganda film … that insults the truth and the Italian people,” Italy’s Minister of Culture Sandro Bondi boycotted Cannes. But unlike filmmaker Jafar Panahi, under arrest by the Iran’s rabid regime, chances are Bondi wasn’t missed at all. (Panahi, on the other hand, has a symbolic chair waiting for him at the festival.)

“The government has been trying at all costs to pass itself off as a victim, and to to twist everything around to its advantage while demonizing in the extreme all those who have arguments against it, even if they’re correct,” Guzzanti told France 24. “[Therefore,] those who are less well-informed and more easily swayed will think of me as someone who isn’t credible, a manipulator.”

Five years ago, Guzzanti’s Viva Zapatero! denounced the Italian government’s attempts to censor comedians. And according to France 24, some Italians present at Cannes predicted that Draquila will be banned from Italian television. In fact, that wouldn’t be too surprising, as Berlusconi has an octopus-like grip on the Italian media.

And that’s one of Draquila‘s most damning accusations – and warnings. In her documentary, Guzzanti points out that in case of a national emergency, Italy’s Civil Protection Agency, headed by Berlusconi crony Guido Bertolaso (currently under investigation for corruption), has the power to “temporarily” override existing laws.

That power, combined with the backing of the Berlusconi media empire, helped to turn a mammoth disaster into a “Great Event” so as to enhance the dominance of Italy’s political-business (and criminal – as in Mafia-related) class. All that, of course, with the eager assistance of the easily manipulated and acquiescent masses.

Bertrand Tavernier’s La princesse de Montpensier / The Princess of Montpensier is in the running for the Palme d’Or at the 2010 Cannes Film Festival. The period drama set during the reign of Charles IX, when followers of different Christian sects (Catholics and Protestants) were at one another’s throats, stars Mélanie Thierry, Gaspard Ulliel, Lambert Wilson, and Grégoire Leprince-Ringuet.

According to the film’s notes, Tavernier decided to adapt Madame de la Fayette’s 17th-century novel because he wanted to make a “love story that was both lyrical and epic in nature,” adding that after filming In the Electric Mist in the United States he felt “the visceral urge to dive into a profoundly French project.”

Below is a snippet from Kirk Honeycutt’s review in The Hollywood Reporter:

“With this film, Tavernier pokes a real hole in costumed romance. Everything feels all too real here. There is little room for grand gestures or noble sentiments. Combat is nasty and obscene. A wife cheating on her husband is sordid. And when a man truly loves and respects a young woman, that love is not returned.

“Despite this – or perhaps because of it – The Princess of Montpensier is one of the finest costume dramas in a long while.”

Not everyone appreciated Tavernier’s effort, however.

“The only film that got mildly booed [at the press screening] was the pretty awful La princesse de Montpensier,” writes Sasha Stone at Awards Daily. “The Tavernier film was a difficult sit, despite the much-commented upon beauty of the cast. It is a limp romance novel at best with some nudity.” 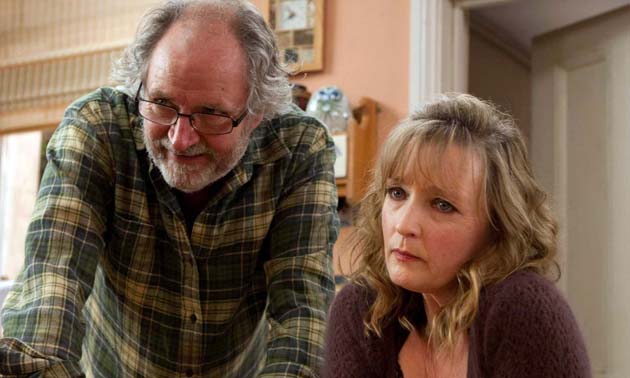 ‘Another Year’ movie: Cannes highlight or…?

Mike Leigh’s latest movie, Another Year, which revolves around old age, death, and family ties, is in the running for the 2010 Cannes Film Festival Palme d’Or. For some, Leigh’s drama is one of the festival highlights; for others, it’s anything but.

But whether or not they’ve actually liked the film, Another Year movie reviewers seem to have been unanimous in their praise for its cast, which includes Ruth Sheen, Jim Broadbent, Imelda Staunton, Lesley Manville, and Oliver Maltman. Expect some form of recognition for Another Year at Cannes 2010’s awards ceremony.

Below you’ll find a few Another Year movie review snippets.

“Mike Leigh’s latest slice-of-British-life picture is titled Another Year, and many viewers will be grateful it’s just the one. Acutely observed but gloomy and lacking narrative, it tells of 12 months in the life of a decent but dull suburban couple and their friends, most of whom you would go out of your way to avoid at a party. … It’s a sedate film without drama that festival juries could well fall in love with, but moviegoers might decide that their own brand of misery is quite sufficient, thanks.” Ray Bennett in The Hollywood Reporter.

“For most of this long film, though, Leigh insists on building his actor’s small revelations into the performance equivalent of arias: scenes that last 20 to 30 minutes. Subtlety evaporates into sameness … All the actors make the most of their time before the camera; and eventually a plot emerges, a narrative crescendo is reached. It’s real life, processed for the cinema in Leigh’s practiced style. But the real life it simulates is too often that of an evening that turns into an endless night, with friends one wishes might just get their coats and get out.” Mary Corliss in Time.

“… [W]hen I say that I loved Another Year, the Leigh film that just premiered at Cannes, members of the Leigh cult should consider themselves warned: The movie has precious little in the way of shrieking, didactic working-class sanctimony, or cheaply lovable over-the-top gags.

“What it does have is an overwhelming bittersweet melancholy at the passing of life from middle age into … well, I guess you could call it late middle age, but then you’d be falling into the self-deceptive trap shared by the movie’s characters, who will do anything to avoid the realization that the cold and nasty word for the condition they’re heading towards is … old.” Owen Gleiberman at Entertainment Weekly.

“Age, happiness and the passing of time are the themes that percolate movingly through Mike Leigh’s Another Year, his first film since 2008’s punchy, upbeat Happy-Go-Lucky. It’s a serious, meditative but powerful drama that explores a year in the life of a contented, endearing professional couple in their early sixties and the friends and family who cross their path.” Dave Calhoun in Time Out London.

January 2011 update: Featuring Jim Broadbent, Ruth Sheen, and Lesley Manville, the British-made Another Year scored $111,869 at six venues on its late December debut in the United States, with a solid – though hardly outstanding – $18,645 per-theater average.

‘You Will Meet a Tall Dark Stranger’ reviews

You Will Meet a Tall Dark Stranger was screened out of competition at the Cannes Film Festival. Allen was present to answer questions from reporters, and according to Salon’s Andrew O’Hehir, the 74-year-old filmmaker kept forgetting names of films and performers and looked older than Manoel de Oliveira (who’s 101).

“Life! I do believe it’s a grim, nightmarish, meaningless experience. One must have one’s illusions to go on living,” Allen, chirpier than ever, is quoted as saying.

Below are snippets from several You Will Meet a Tall Dark Stranger reviews.

You Will Meet a Tall Dark Stranger will be released by Sony Pictures Classics in the United States in the fall.

“The grass is always greener in You Will Meet a Tall Dark Stranger, Woody Allen’s roundelay of perplexed characters chasing illusions rather than reality. As a film from Allen’s ongoing British/European period, where he spins out comic trifles or morality plays that drift seemingly free of national context, the comedy is more amusing than most, though it lacks the vibrant spirit of Vicky Cristina Barcelona. This is Woody in a bemused mood, devilishly complicating his characters’ lives with follies and foibles of their own making until he ties each protagonist into a comic pretzel. Then he takes a tea break.” Kirk Honeycutt in The Hollywood Reporter.

“The atrociously titled You Will Meet a Tall Dark Stranger is one of Woody Allen’s ‘fables’ — which could almost be code, at this point, for the flavorless, dry-cookie thing that results when he writes and directs a comedy on autopilot. The film is notable, if that’s the word, for being the first movie Allen has made in London that is every bit as bad as his most awful New York comedies, like Anything Else and Melinda and Melinda.” Owen Gleiberman at Entertainment Weekly.

“You Will Meet a Tall Dark Stranger is an old-fashioned roundelay in which old marriages crumble and new relationships begin, but one in which nobody gets what they want. Or rather, people who get what they want do so under false pretenses, because they are literally living a lie. This is a universe where emotional honesty is a liability that leads to loneliness and betrayal, while emotional fidelity is entirely out of the question.” Andrew O’Hehir at Salon.com.