May 12: The Milan International Film Festival (not to be confused with the Milano Film Festival) is no longer an actual film festival. In the last two years, it has remade itself into a small-time marketing effort for independent (often US-made) films. Their chief promotional tools are the MIFF Awards, whose winners have been announced this week.

Kristen Stewart was the Leonardo [Da Vinci]’s Horse recipient for Best Actress for her performance as a pole dancer/prostitute in Jake Scott’s Welcome the Rileys. Stewart’s victory is clearly a case of the performer bringing recognition to the award, and not vice-versa.

The Best Picture winner will be selected by audience members following a series of screenings at Milan’s Teatro Gnomo.

The MIFF Award winners are chosen not by a group of renowned filmmakers and critics, but by the Milan/Los Angeles-based Made in Milan International Film Society, whose members comprise of … Well, your guess is as good as mine. 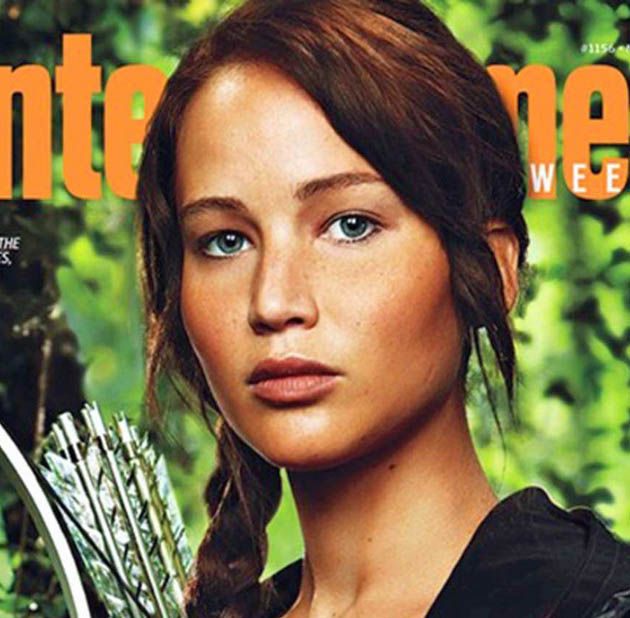 Jennifer Lawrence made headlines a while back after it was announced that the Winter’s Bone actress had been cast as the female lead – the fighter Katniss Everdeen – in Gary Ross’ film adaptation of Suzanne Collins’ dystopian bestseller The Hunger Games.

The spring 2011 Entertainment Weekly cover above is the first look at Lawrence as Katniss, one of a number of youthful gladiators who must fight to the death in Collins’ bleak futuristic world.

Katniss, however, ends up surviving one too many fights, much to the consternation – and concern – of that era’s powers-that-be.

Elizabeth Banks (Man on a Ledge).

To be released by Lionsgate, The Hunger Games is scheduled to come out in early 2012.

Also this year, Jennifer Lawrence had one of the lead roles in Jodie Foster’s The Beaver, starring Mel Gibson. The Beaver opened weakly at the North American box office, but was enthusiastically received at its official Cannes screening. (Audiences at such screenings tend to be quite receptive.)

Jennifer Lawrence will next be seen in Matthew Vaughn’s X-Men: First Class, in which she plays Raven / Mystique.

Lawrence’s co-stars in the X-Men franchise reboot are: 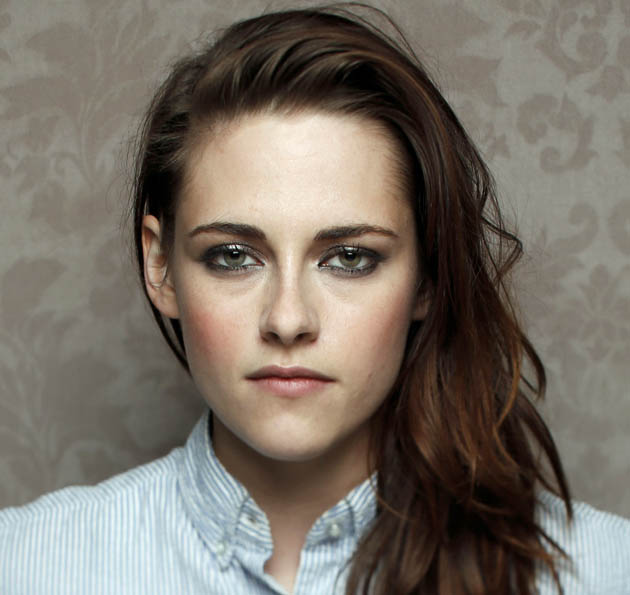 Kristen Stewart: Actress in the ‘Twilight’ movies to be seen as Snow White.

‘Snow White and the Huntsman’ gets new release date

Starring Kristen Stewart, Chris Hemsworth, and Charlize Theron, Snow White and the Huntsman will be released by Universal on June 1, ’12. The Rupert Sanders-directed fantasy adventure had been originally scheduled to open on Dec. 21, ’11.

The reason Universal moved up their film’s release date is clear: Snow White and the Huntsman will now open about a month before its competitor, Relativity Media’s The Brothers Grimm: Snow White, a 3D version of the poisoned-apple tale to be directed by Tarsem Singh, and starring:

For the time being, The Brothers Grimm: Snow White, which reportedly starts shooting in August, is scheduled to open June 29, ’12. Melissa Wallack and Jason Keller have written the adaptation.

In the past, there have been other back-to-back projects about the same topic. In 1960, for instance, there were two different Oscar Wilde biopics:

The following year, Milos Forman’s Valmont, also based on Choderlos de Laclos’ novel and toplining Colin Firth, Annette Bening, and Meg Tilly, was both a critical and a box office misfire.

Now, it remains to be seen whether The Brothers Grimm: Snow White will have its release date moved up as well.

Days ago, Universal moved up the release of Snow White and the Huntsman, starring Kristen Stewart, Chris Hemsworth, Sam Claflin, and Charlize Theron, from late December 2012 to June 1. Not to be outdone, Relativity Media has moved up the project currently known as Brothers Grimm: Snow White, starring Lily Collins, Armie Hammer, and Julia Roberts, from June 29, 2012, to March 16, according to The Hollywood Reporter.

Shades of Armageddon vs. Deep Impact, Oscar Wilde vs. The Trials of Oscar Wilde, Dangerous Liaisons vs. Valmont, and Volcano vs. Dante’s Peak.

And never mind the fact that March 16 is less than 10 months away, and that neither Snow White project has begun filming. Apparently, all Relativity Media cares about at this stage is to place its Snow White ahead of Universal’s. Also, last year a March release did wonders for Tim Burton’s Alice in Wonderland (or perhaps vice-versa).

Adding insult to injury, Relativity has also announced that it will open the female-friendly Safe Haven, based on Nicholas Sparks’ novel, on June 1. (See Snow White and the Huntsman release date above.)

And to think Universal and Relativity were financial buddies at one point, e.g., the Matt Damon vehicle Green Zone.

I should mention that Disney may have its own China-set Snow and the Seven released in 2013. Personally, I think they should have a China-set Cinderella, as that country is supposed to be the birthplace of that tale about beautiful women with little feet.

Melissa Rosenberg adapted Stephenie Meyer’s bestselling novel, in which vegetarian vampires, werewolves, and a human-vampire hybrid (a humpire?) face off a group of mean-spirited vampires. The outcome of the confrontation, however, can only be seen in 2012, when Breaking Dawn – Part 2 comes out.

The day after Relativity Media announced that its Lily Collins-Armie Hammer-Julia Roberts Snow White project currently known as Brothers Grimm: Snow White would be released on March 16, thus a few months ahead of Universal Pictures’ Kristen Stewart-Chris Hemsworth-Charlize Theron Snow White and the Huntsman, which had been moved up to July 1 so as to arrive in theaters ahead of Relativity’s Snow White then scheduled for a late July release… Are you following all that?

Now I’m waiting for Universal to come up with 14 dwarves just out of spite.

Starring frequent travelers Daniel Radcliffe, Emma Watson, and Rupert Grint, Harry Potter and the Deathly Hallows: Part 2 is the last installment of the billionaire Harry Potter franchise. In the recently released poster seen above, we get to see a close-up of Hermione, played by Emma Watson.

Harry Potter and the Deathly Hallows: Part 2 promises a climactic battle between the forces of Good (Harry Potter and pals) and Evil (Lord Voldemort, played by Ralph Fiennes, and pals). The special effects should be interesting, but you really don’t need a crystal ball to know beforehand who’ll win, even if you haven’t bothered with reading the Harry Potter bestsellers.

Directed by David Yates, Harry Potter and the Deathly Hallows: Part 2 opens on July 15 in the United States.

Katie Holmes, Don’t Be Afraid of the Dark

Del Toro co-wrote the horror film’s screenplay with Matthew Robbins. Katie Holmes, Guy Pearce and Bailee Madison star. Don’t Be Afraid of the Dark is based on a 1973 telefilm “that del Toro believes is the scariest TV production ever made.”

Directed by John Newland, the TV movie starred True Grit‘s Kim Darby and Jim Hutton. The new version has added a child to the proceedings.

The story follows Sally (Madison), a young girl who moves to Rhode Island to live with her father (Pearce) and his new girlfriend (Holmes) in the 19th-century mansion they are restoring. While exploring the house, Sally starts to hear voices coming from creatures in the basement whose hidden agenda is to claim her as one of their own.

FilmDistrict will release Don’t Be Afraid of the Dark in the US on August 26.

As Guest Director, del Toro will also present at the festival a film “that has been an influence to him.” The screening will be followed by “a conversation” with the director of The Devil’s Backbone and Pan’s Labyrinth.

The upcoming exhibition BEAUTY CULTURE, which opens on May 21 at the Annenberg Space for Photography in Century City, will feature a new 30-minute documentary directed by Lauren Greenfield.

As per the Annenberg Foundation’s press release, Greenfield’s film, which includes interviews with several photographers and subjects included in the exhibition, “accompanies the venue’s sweeping, unprecedented photographic exploration of how feminine beauty is defined, challenged and revered in modern society.”

Filmmaker and photographer Lauren Greenfield’s credits include THIN, kids + money, Girl Culture and Fast Forward: Growing up in the Shadow of Hollywood. THIN won the John Grierson Award for Best Documentary at the London Film Festival. Greenfield also serves on the Sundance Alumni Advisory Board.

BEAUTY CULTURE opens to the public in Los Angeles on May 21, 2011 and runs through November 27, 2011. Wednesday through Sunday: 11 am – 6 pm, closed Monday and Tuesday. Admission is free.

The Annenberg Space for Photography is located at 2000 Avenue of the Stars in Century City.

The International Documentary Association will present “The Art of the Personal Documentary: A Conversation with Doug Block” at 7:30 p.m. on Monday, May 16, at The Cinefamily (the old Silent Movie Theatre).

Doug Block is the New York-based director of 51 Birch Street and The Kids Grow Up. He and moderator Marjan Safinia (But You Speak Such Good English, Seeds) will discuss the following topics:

How did his filmmaker journey lead him to making personal documentaries? What are the hardest moments he’s had to face while making work about his family? How has he developed the ability to still make strong directorial choice when the subject of his films is, quite literally, so close to home? How does he navigate production as a self-shooter who is in the film?

Doc U is the International Documentary Association’s series of educational seminars and workshops for aspiring and experienced documentary filmmakers. More information available at www.documentary.org/doc-u

True, as per the article we know members of MMIFS choose the nominees and most of the winners. But we don’t know who those members are — or how many of them are out there.

It is voted by their members as it is in several awards, included The Oscars.

“Here under the films Nominated to MIFF Awards made public by the programming committee. Now exclusively the Made in Milan International Film Society Members will identify the Leonardo da Vinci’s Horse Winners in each category. Winner will be announced and awarded on May 10, 2011 in Milan.”