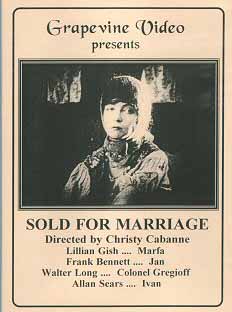 Though all but completely forgotten today, Christy Cabanne (at times billed as William Christy Cabanne) was a respected name in the 1910s and 1920s. Among his credits are the1916 Douglas Fairbanks vehicle The Mystery of the Leaping Fish, considered by some Fairbanks’ best film of the 1910s; the highly successful 1925 actioner The Midshipman, which helped to seal Ramon Novarro’s stardom; and several key scenes in the mammoth 1925 version of Ben-Hur, also starring Novarro.

An apprentice to D.W. Griffith, Cabanne seems to have not only learned a good deal from the (now all but insufferable) Master, but during the 1910s he also seems to have used his cinematic know-how to create films that, in terms of narrative, character development, and acting are superior to any of the Griffith productions I have seen from the same period.

The 1916 drama Sold for Marriage is a good example of Cabanne’s naturalistic and quite modern approach to filmmaking. The tale (written by William E. Wing) of a young Russian immigrant who almost becomes the victim of an arranged marriage in early 20th-century Los Angeles, Sold for Marriage is filled with true-to-life details and fully believable performances – besides Lillian Gish’s beautifully nuanced heroine, there’s also handsome Frank Bennett doing excellent work as her romantic interest.

Additionally, Sold for Marriage demonstrates that feature films produced at the dawn of the “multi-reel” era could flow as smoothly and be as technically proficient as if they had been made yesterday.

Cabanne’s career went downhill at about the time films learned to talk, but he continued working in B films, usually adventure flicks and Westerns, until the late 1940s. He died in 1950.

Throughout her life, Lillian Gish remained a staunch defender of D.W. Griffith’s career and legacy. Besides The Birth of a Nation, the multi-part Intolerance (1916), and the tragic interethnic romance Broken Blossoms (1919), Lillian Gish also worked with Griffith in several other features (e.g., True Heart Susie, Way Down East, The Greatest Question, Orphans of the Storm) and numerous shorts (An Unseen Enemy, The Mothering Heart, The Battle of Elderbush Gulch).

Gish’s TV work included playing Mary Todd Lincoln in Ford Star Jubilee episode “The Day Lincoln Was Shot” (1956); Mrs. Loftus in American Playhouse‘s “Adventures of Huckleberry Finn, Part I” (1986); one of Bob Crane’s sweet & homicidal aunties (Helen Hayes was the other one) in Arsenic and Old Lace (1969); and, all but inevitably, a guest spot in The Love Boat (1981).

The recipient of an Honorary Oscar in 1970 and of the Kennedy Center Honor in 1982, Lillian Gish died at age 99 in February 1993. Her also popular (but less iconic) sister, Dorothy Gish (Hearts of the World, Orphans of the Storm, Nell Gwyn, The Cardinal), died at age 70 in 1968.

Lillian Gish enjoyed one of the longest film careers ever: 75 years, from several 1912 shorts to co-starring with Bette Davis in Lindsay Anderson’s 1987 drama The Whales of August – which earned Gish the National Board of Review’s Best Actress award (tied with Holly Hunter for Broadcast News).