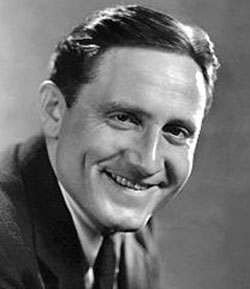 “I can’t explain why I was never able to say to him what I wanted to say: that he was a great actor. Everyone else said it a thousand times over, but I never managed it. Once I told him I loved him. That came quite easily, and he believe me and was emotional about it. But I was afraid to say, ‘Spencer, you’re a great actor.’ He’d only say, ‘Now what the hell kind of thing is that to come out with?’ He wanted to know it; he needed to know it. But he didn’t want you to say it – just think it. And maybe that was one of the reasons he was a great actor. He thought and listened better than anyone in the history of motion pictures. A silent close-up reaction of Spencer Tracy said it all.”

Those who don’t think that Marlon Brando is the greatest ham – er, actor – who ever lived usually name either Spencer Tracy or Laurence Olivier. Personally, I’d rather watch, say, Alec Guinness or Marcello Mastroianni. If I’m going to be served ham, I want it to be as lean as possible.

Among the Greatest Movie Actors, Spencer Tracy is usually singled out for his “naturalism.” Up to 1955 or whereabouts, Tracy’s “naturalness” was so natural, but so natural that I’ve never been able to perceive even an iota of it. Instead, all I saw in, say, The Painted Woman, Me and My Gal, San Francisco, Boys’ Town, Edison, the Man, Without Love, Cass Timberlane, Father of the Bride, etc., etc., was an actor (quite obviously) playing a role: making faces while delivering lines – whether angry or sad or happy or near death – in the same abrasive, nasal manner.

Now, something happened in the mid-1950s. Perhaps Tracy’s heavy drinking finally caught up with him, slowing him down. His speech became less mannered, his nasal tones less grating, his abrasiveness metamorphosed into a sort of Zen-like wisdom, while his acting became more realistically naturalistic. I find Tracy excellent in Bad Day at Black Rock, Inherit the Wind, Judgment at Nuremberg, and Guess Who’s Coming to Dinner.

TCM’s “Summer Under the Stars” concludes on Sunday, Aug. 31, with a Spencer Tracy Day, during which you’ll be able to appreciate Tracy’s naturally artificial talents a plenty.

In the Academy Award-nominated blockbuster San Francisco he plays a Catholic clergyman who saves Clark Gable’s soul but not the soul of the city of San Francisco, which not only happens to be destroyed by the 1906 earthquake but rises again to become a haven for gays and lesbians (if Tracy’s self-righteous priest only knew…); in Edison, the Man, he plays greedy Thomas Edison as a great hero; and in Boys’ Town he’s another self-righteous priest who saves gee-whiz rebel teen Mickey Rooney from perdition. How unfortunate. Anyhow, the result was an Academy Award win for Tracy (his second, following the previous year’s Captains Courageous) and one of the very worst films ever made.

Without Love is one of the weakest Spencer Tracy-Katharine Hepburn pairings (only The Sea of Grass is worse); Father’s Little Dividend manages to be even more mediocre than Father of the Bride (worse yet, at the end of this film about human breeding habits we discover that granddad Tracy and his gorgeous wife Joan Bennett are still having sex – and they dare call Father’s Little Dividend a Family Film!); while Captains Courageous (above) has Tracy playing a (painfully phony) Portuguese fisherman while teaching spoiled brat Freddie Bartholomew something or other about True Values. (The fisherman should instead have taught the kid how to swim.)

And finally, the recommendations:

Tracy is actually perfectly ok in Adam’s Rib, the best of the Tracy-Hepburn pairings, directed by George Cukor from a screenplay by Garson Kanin and Ruth Gordon, and with Judy Holliday nearly stealing the show as the jealous wife who shoots philandering husband Tom Ewell; and, as I mention above, Tracy is excellent in John Sturges’ mystery Western Bad Day at Black Rock, with the invariably reliable Robert Ryan providing solid support.

Now, Tracy isn’t very convincing in any of the following, but the films themselves are worth watching: Frank Borzage’s Man’s Castle is a beautifully shot social melodrama boasting one of Loretta Young’s best performances; Fred Zinnemann’s World War II drama The Seventh Cross follows a man who has fled a concentration camp; and Fritz Lang’s Fury is a worthwhile attack on mob justice, with a highly effective Sylvia Sidney as hunted-man Tracy’s gal.

5:00 AM They Gave Him a Gun (1937)
With no other prospects, a World War I veteran turns to crime. Cast: Spencer Tracy, Franchot Tone, Gladys George. Director: W.S. Van Dyke. Black and white. 95 min.

7:00 PM Father’s Little Dividend (1951)
In this sequel to Father of the Bride, a doting father faces a series of comic trials when his daughter has her first child. Cast: Spencer Tracy, Elizabeth Taylor, Joan Bennett. Director: Vincente Minnelli. Black and white. 81 min.

I love Spencer Tracy && Loretta Young in the movie Man’s Castle, it is by far one of the best movies ever made…