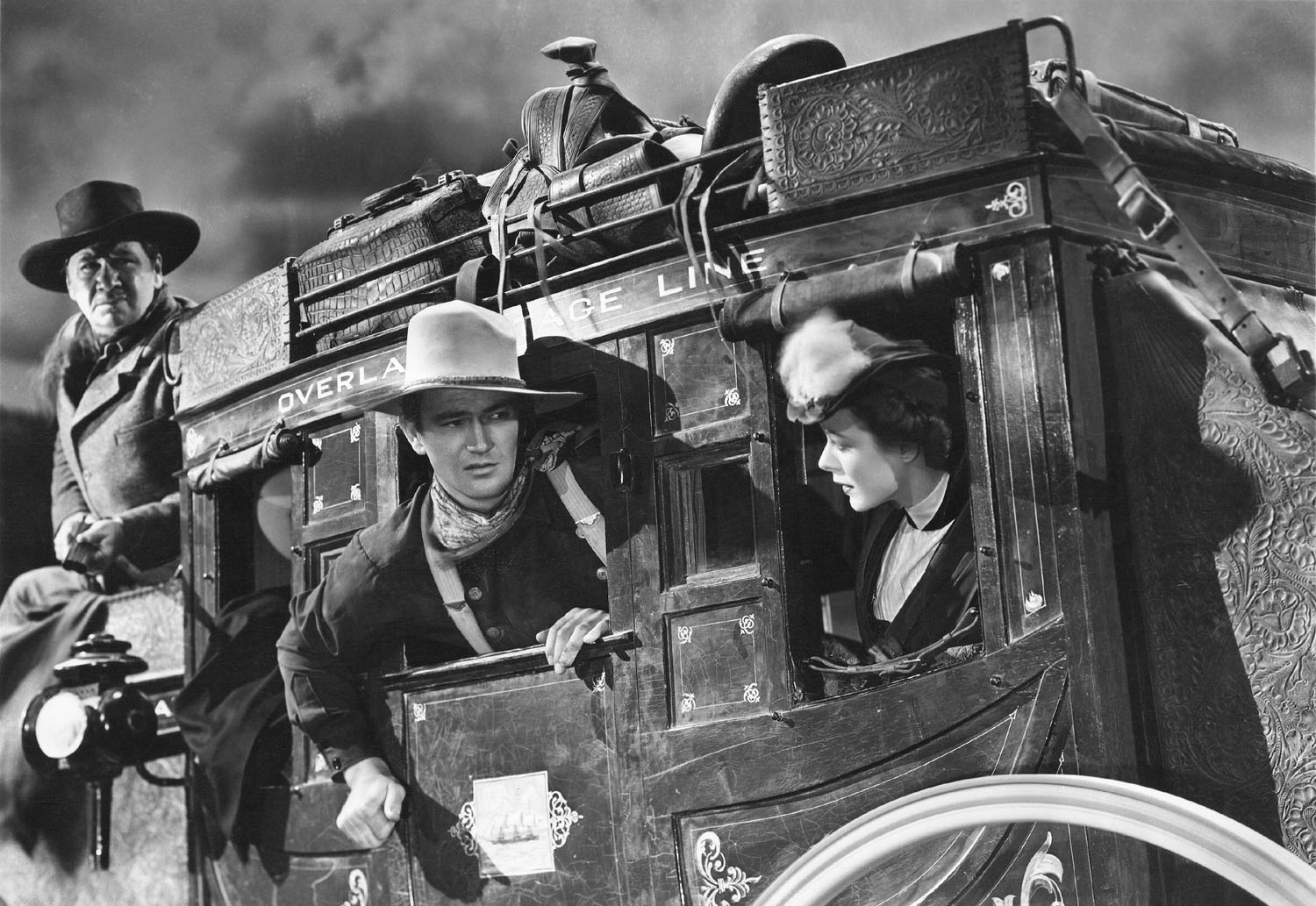 Stagecoach is the next 1939 best picture Oscar nominee to be screened as part of the Academy of Motion Picture Arts and Sciences’ series “Hollywood’s Greatest Year: The Best Picture Nominees of 1939.” Directed by John Ford, and starring John Wayne and Claire Trevor, Stagecoach will be presented on Monday, June 1, at 7:30 p.m. at the Academy’s Samuel Goldwyn Theater in Beverly Hills. The film will be introduced by John Ford’s grandson, Dan Ford.

Beginning at 7 p.m., the evening will also feature the second and third chapters of the 1939 serial Buck Rogers, starring Buster Crabbe and Constance Moore, in addition to the animated short The Film Fan, starring Porky Pig.

Instead of John Ford’s revered Westerns – Stagecoach, My Darling Clementine, She Wore a Yellow Ribbon, The Searchers, The Man Who Shot Liberty Valance – this movie fan prefers the less renowned works of Delmer Daves (3:10 to Yuma, The Hanging Tree) or Anthony Mann (The Furies, The Naked Spur).

Or for that matter, George Stevens’ Shane, Nicholas Ray’s Johnny Guitar, Arthur Penn’s Little Big Man, and Fred Zinnemann’s High Noon – works by filmmakers who, unlike Ford, were not associated with the Western genre.

Most film critics, scholars, and historians heartily disagree. Stagecoach (1939) is considered by many the best Western ever made. Others find it second only to Ford’s own The Searchers (1956).

Some consider Stagecoach, a partial rip-off of Guy de Maupassant’s story Boule de suif, to be not only John Ford’s best film, but also one of the greatest films ever made, period. Written by frequent Ford collaborator Dudley Nichols (from Ernest Haycox’s story “Stage to Lordsburg”), this quintessential Western follows several disparate characters facing a series of obstacles – birth, death, prejudice, love – while traveling through the American West.

Although I think Stagecoach is Ford’s best Western, I prefer the lesser-known 1945 Angel and Sinner / Boule de suif, directed by Christian-Jacque. The chief reason for my choice, I’d say, is that Boule de suif doesn’t have John Wayne’s Ringo Kid in it. The film’s focus is on Micheline Presle (a more light-hearted version of Claire Trevor’s character) and on the inner workings of the various travelers.

In fact, Wayne’s Ringo – the archetypal (or rather, cliched) strong, silent type – is the weakest element in Stagecoach. Someone like Gary Cooper could have done a much better job of creating a flesh-and-blood human being out of role written with a granite statue in mind. Wayne just manages to look stolid while delivering his lines in his usual monotone manner. That, however, seemed to have sufficed both for audiences (who made him a star) and for John Ford (who would work with him in about a dozen other films). 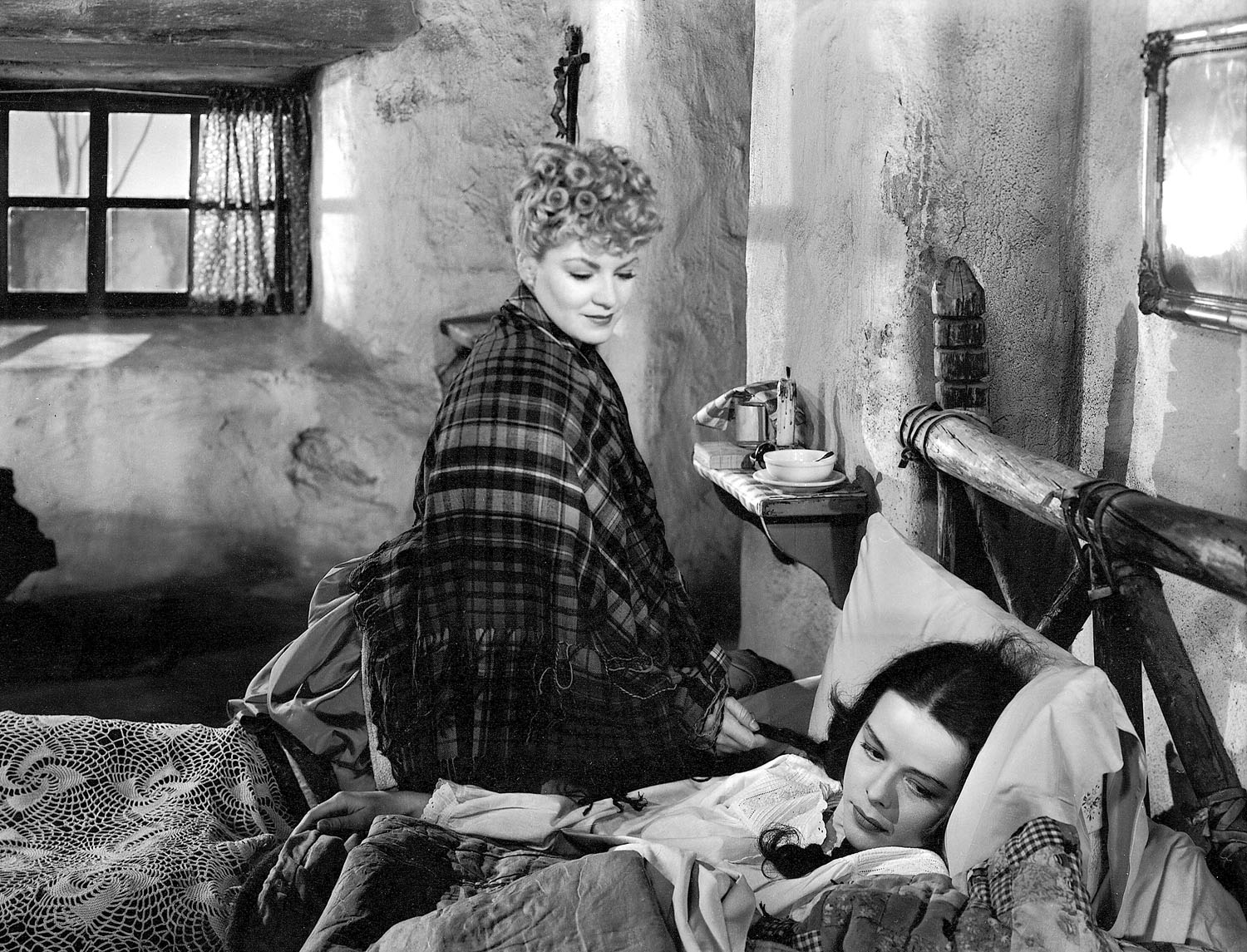 The other cast members are mixed bunch: Claire Trevor (above, with Louise Platt) is as usual fully believable as the hooker with a heart of steel-covered gold, and so are best supporting actor Oscar winner Thomas Mitchell as an alcoholic doctor and timid Donald Meek as a timid liquor salesman. (Too bad no one at the time was imaginative enough to cast Meek as the Kid.) Silent-screen veteran George Bancroft and meanie John Carradine fare less well, though all of them make Wayne’s Ringo look as if he’s just a stagecoach fixture.

The injuns who attack the travelers are just that – the deader the better. That sequence, however, was remarkably shot and edited, even if its most memorable moment, a shot from below of the racing stagecoach, was taken straight out of the 1925 Ben-Hur.

Tickets for Stagecoach and other individual films in the “Hollywood’s Greatest Year” series are $5 for the general public and $3 for Academy members and students with a valid ID. Tickets may be purchased online at www.oscars.org, by mail, in person at the Academy during regular business hours or, depending on availability, on the night of the screening when the doors open at 6:30 p.m.

Curtain time for all features is 7:30 p.m., and pre-show elements will begin at 7 p.m. The Academy is located at 8949 Wilshire Boulevard in Beverly Hills. For more information, call (310) 247-3600. For the latest updates on guests, cartoons, and other surprises, visit www.oscars.org.

Officially based on Ernest Haycox’s 1937 short story “Stage to Lordsburg,” the screenplay by frequent Ford collaborator Dudley Nichols (Pilgrimage, The Informer) is clearly inspired by elements found in both Guy de Maupassant’s 1880 short story “Boule de Suif” and, as Thomas Schatz explains in his essay “Stagecoach and Hollywood’s A-Western Renaissance,” Bret Harte’s 1869 short story “The Outcasts of Poker Flat,” which Ford himself had transferred to the screen in 1919.

Based on a novel by Catherine Rihoit, Ettore Scola’s La Nuit de Varennes (a.k.a. That Night in Varennes) also has a similar theme, pitting a group of disparate characters on a stagecoach traveling from to during the French Revolution.

Christian-Jaque’s Angel and Sinner / Boule de suif (1945), a straight retelling of de Maupassant’s story, stars Micheline Presle as the title character (loosely translated as “Dumpling,” “Ball of Fat,” or “Ball of Lard”) – a sex worker aboard a stagecoach filled with passengers fleeing Prussian-occupied Rouen for Le Havre during the Franco-Prussian War (1870–71).

The unpretentious, warm-hearted Boule de Suif is looked down upon by the other passengers who, as men and women of solid moral and social standing, have no qualms about coercing the young woman into offering her body to a Prussian officer so their stagecoach can reach its destination.

John Ford recalled: “’This is a great story,’ I thought, and I bought it for a small amount – I think it was $2,500. Then I tried to sell it to the studios, but nobody was buying. After the studio heads read it, they said to me, ‘But this is a Western! People don’t make Westerns anymore!’”

And finally, as has been frequently asserted, let’s not forget that Stagecoach revolutionized the Western genre, which had previously been relegated to low-budget, Saturday matinee-type, brainless fare such as John Ford’s early collaborations with Harry Carey (Thieves’ Gold, Riders of Vengeance), countless John Wayne oaters, and Roy Rogers and Gene Autry stuff. In addition to, among others: