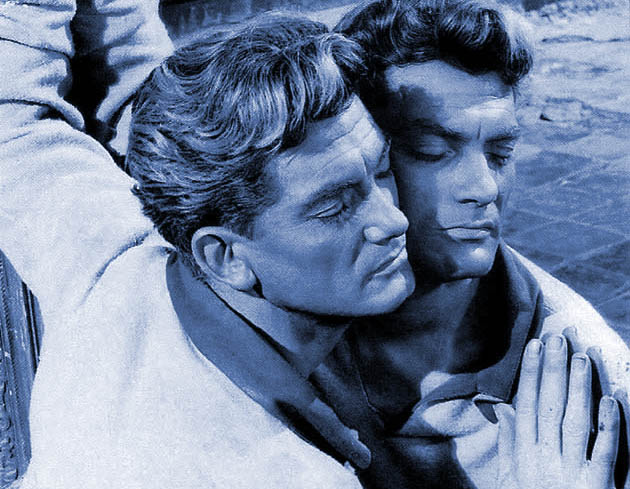 Orpheus with Jean Marais. Starring Jean Cocteau’s muse, protégé, and (for some time) lover, Jean Marais, Orpheus traces the otherworldly trajectory of the titular, modern-day Parisian poet as he falls in love with Death. Worse yet, his feelings are reciprocated. As both the mysterious Princess and the lovestruck Death, Spanish-born Maria Casarès (1922–1996) – poised and coolly passionate – delivers one of the most memorable performances in cinema history. A decade after Orpheus, both Marais (as Oedipus) and Casarès (back as The Princess) would be seen in Cocteau’s final feature, the all-star fantasy Testament of Orpheus.
Contents hide
1. Love & mortality + the space in between: ‘Orpheus’ & ‘A Matter of Life and Death / Stairway to Heaven’
1.1. Love = Death
1.2. Death becomes her: Magnificent Maria Casarès
1.3. ‘Stairway to Heaven’ & U.K./U.S. relations: That space in between + celestial flag-waving
1.4. Earthlier ‘Orpheus’
1.5. Yesterday’s worst enemy…
1.6. TCM Christmas films on Dec. 19: From ‘Grease’ ‘ to ‘Stairway to Heaven’
1.7. More Christmas movies
1.8. Princess = Death?
1.9. Black and white in color
1.10. Sharing the blame

Love & mortality + the space in between: ‘Orpheus’ & ‘A Matter of Life and Death / Stairway to Heaven’

The similarities pretty much end there. The former was made for adults; the latter, notwithstanding its undeniable qualities, was made with an eye on the mainstream American market.

A Christmas film for the poetically inclined, Cocteau’s entrancing, visually arresting Orpheus / Orphée (1950) stars Jean Marais in the title role – a handsome, modern-day Parisian poet who falls in love with Death. If that weren’t all, it looks like the feeling is reciprocal.

No one in their right mind should watch Orpheus expecting a happy ending. I mean, not even a certified Hollywood product like Mitchell Leisen’s Death Takes a Holiday (1934), in which Death (Fredric March) falls head over heels for a pretty young thing (Evelyn Venable), dared to give its two lovebirds a happy hereafter.

As a plus, Orpheus’ trio of blond performers are all great to look at: leading man Jean Marais; Jean Cocteau’s latest protégé, Edouard Dhermitte, in a supporting role as the poet Cégeste, the young protégé of a mysterious princess; and Marie Déa (Les Visiteurs du Soir, Secrets) as Orpheus’ wife, the (at least for a while) ill-fated Eurydice.

Yet Orpheus truly belongs to the raven-haired Maria Casarès (Children of Paradise, Les dames du Bois de Boulogne), who, in coolly passionate splendor, brings to life The Princess and her otherworldly self, Death.[1] In fact, Casarès work in Orpheus remains one – or rather, two? – of the greatest, most indelible portrayals in film history.

‘Stairway to Heaven’ & U.K./U.S. relations: That space in between + celestial flag-waving

Filled with good intentions and eager to ensure that its post-war Anglo-American audience wouldn’t give up hope for a better world, Michael Powell and Emeric Pressburger’s A Matter of Life and Death / Stairway to Heaven (1946) revolves around a man who should be dead but isn’t quite.

That’s David Niven’s fearless all-British pilot, who finds himself both back in England and in that space in between also inhabited by Robert Montgomery in Alexander Hall’s Here Comes Mr. Jordan (1941) and James Stewart in Frank Capra’s It’s a Wonderful Life (1946).

Should the pilot be allowed to go on living? Or should he be dragged up the steps of that seemingly endless Stairway to Heaven?

There is much to recommend this (mostly) Technicolor fantasy.[2] Having said that, Stairway to Heaven should have been a good 20 minutes shorter and a lot less politically didactic.

Like Orpheus, this Powell & Pressburger collaboration deals not only with its titular topics but also with the complex question of love – albeit in a less somber, less ethereal, and more simple-minded manner than the Cocteau film.

That’s possibly because the filmmakers’ chief concern – besides American moviegoers’ dollars – was the more mundane matter of flag-waving, which, inevitably, is handled with the subtlety of an elephant stampede.

At one point, celestial barristers Raymond Massey and Roger Livesey, hardly the most understated of actors, take it upon themselves to engage in an endless argument about the heavenly ordained relationship between the United Kingdom and the United States – two nations that, long before their deified WWII alliance, had fought three wars against each other in the preceding two centuries.[3]

Besides the verbose Massey and Livesey, Stairway to Heaven features an ineffectual David Niven (at his best in non-romantic roles – e.g., Around the World in 80 Days, Separate Tables); the lovely – and lovingly photographed – Kim Hunter (Best Supporting Actress Oscar winner for A Streetcar Named Desire, 1951) as the pilot’s American love interest (instead of the originally considered Betty Field); and, as a fey heavenly Conductor, a surprisingly effective Marius Goring (The Red Shoes, Odette).

In sum, political didacticism or no, Stairway to Heaven is not to be missed.

Below is the Turner Classic Movies schedule featuring Orpheus and Stairway to Heaven. 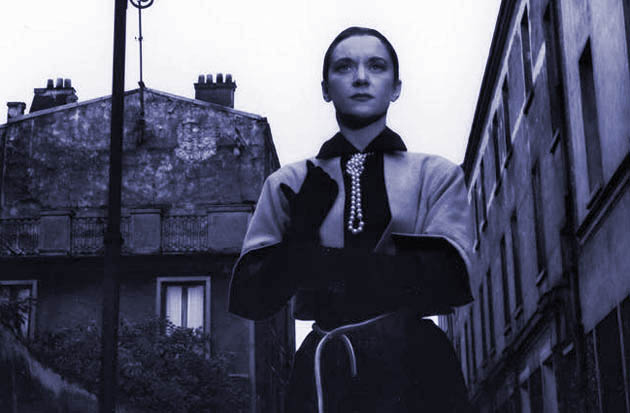 Orpheus with Maria Casarès. In the British fantasy A Matter of Life and Death / Stairway to Heaven, everything is duly explained, annotated, and resolved – “… on Earth, nothing is stronger than love!” – before the screen goes dark. In the French fantasy Orpheus / Orphée, however, the ubiquitous symbolism and the final fate of the key characters are left unexplained. Even so, Maria Casarès’ darkly mysterious Princess comes across as a clear, blatant, obvious representation of Death. Bizarrely, Jean Cocteau disagrees, asserting that the Princess “is no more Death than an air hostess is an angel.”

TCM Christmas films on Dec. 19: From ‘Grease’ ‘ to ‘Stairway to Heaven’

Below is a list of Alt Film Guide posts about Christmas movies for all seasons:

[1] Watching Orpheus, it seems pretty obvious that Maria Casarès’ Princess and Death are one and the same. Jean Cocteau, as quoted in The Art of Cinema, apparently disagrees:

“Among the misconceptions which have been written about Orphée, I still see Heurtebise* described as an angel and the Princess as Death.

In the film, there is no Death and no angel. There can be none. Heurtebise is a young Death serving in one of the numerous sub-orders of Death, and the Princess is no more Death than an air hostess is an angel.

I never touch on dogmas. The region that I depict is a border on life, a no man’s land where one hovers between life and death.”

Black and white in color

[2] A Matter of Life and Death / Stairway to Heaven was shot in color by the masterful Jack Cardiff.

The “in-between/is this heaven?” scenes, however, were, according to the credits, “dye-monochrome processed.” That gave them an unusual black-and-white look.

[3] An earlier version of this post placed the blame for Stairway to Heaven‘s overlong, overly preachy celestial trial squarely on Raymond Massey’s shoulder.

In all fairness, Roger Livesey is equally to blame, along with the Powell and Pressburger directing/screenwriting duo.

Grease, A Summer Place, The King of Kings, Orpheus / Orphée, and A Matter of Life and Death / Stairway to Heaven cast info via the IMDb.

“Stairway to Heaven & Orpheus: Two Radically Different Fantasies Tackle That Mysterious Space in Between” last updated in May 2018.

Cary Grant Films: From I Was a Male War Bride to Miscast Macho Aviator + Submarine Commander