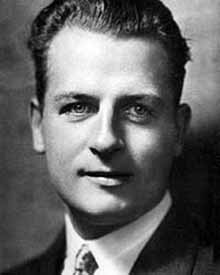 If nothing else, the silly (and unfortunately mistitled) One Hysterical Night – Reginald Denny’s first all-talking vehicle – serves as a good explanation as to why Denny, Universal’s top male star and one of the most popular performers of the 1920s, saw his stardom quickly fizzle when talkies appeared on the scene.

Denny’s voice is fine – even though this Surrey-born “All-American Boy” (or rather, “All-American Boy-About-Town”) had a subtle English accent – and his comedy skills are passable. But instead of offering a prestige production to mark a new phase in Denny’s career, Universal came up with an all-talkie vehicle that looks and sounds like a myriad other low-budget productions of the period. (Denny’s previous vehicle, His Lucky Day, was a part-talkie.)

The scenario, about an heir-to-be whose greedy relatives commit him to a mental institution, was written by Earle Snell, the screenwriter of most of Denny’s vehicles of the late 1920s. Perhaps the studio decided that it was best to stick to Denny’s old formula, though by that time audiences were probably getting sick of him. (Denny had been around in feature films for five years – a long time in those days when stars appeared in five or six productions a year.) Compounding matters, the star has his vehicle swiftly stolen from him by a trio of quirky supporting players: Slim Summerville (as a fey Robin Hood), Joyzelle (as a crazed Salome), and Fritz Feld (as an outrageously over-the-top Paganini).

Worse yet, Denny plays a charming young man in One Hysterical Night even though he was about 40 at the time and looked like a man of 45. Some of his mannerisms – especially his broad (and more than a bit forced) smile – reminded me of Maurice Chevalier. With Chevalier as the new (middle-aged) kid in town, Denny was facing fierce competition in the Man About Town genre, while MGM’s William Haines had taken over the title of Hollywood’s brash All-American Boy.

But then again, Denny’s downfall was possibly as much his (and his studio’s) doing as the result of competition from elsewhere. Besides having written the film’s implausible and unfunny dialogue, Denny was also responsible for the editing of One Hysterical Night. If his aim was to destroy his own stardom, he did a pretty good job with his first all-talking vehicle.

William Judd (Reginald Denny) suddenly finds himself the heir to a fortune. His greedy and conniving aunt (Margaret Campbell) and cousins (D.R.O. Hatswell and Rolfe Sedan) believe they should have inherited all that money. Since the will has a clause precluding Judd from receiving his money in case he is found to be unsound of mind, auntie hatches a killer plan.

Led by his two cousins, Judd goes to a costume ball. Dressed as Napoleon, he is told to act the part once he arrives at the party. What Judd doesn’t know is that he’s actually being taken to a mental institution where all the inmates believe they are historical (or semi-historical) figures, among them Paganini (Fritz Feld), Salome (Joyzelle), and Robin Hood (Slim Summerville). A nurse (Nora Lane) is cast as Napoleon’s Josephine, so she can keep an eye on the new inmate.

Initially, everything goes as planned. Judd is quite affable and much too stupid to realize where he is. But when he finally comes to his senses, Judd bribes a guard and flees the asylum. The other historical personages follow, and so does the nurse.

Free at last, Judd must confront his relatives and prove his sanity to the doctors. He’s helped by Uncle (Peter Gawthorne), a weakling who waits for the very last minute to display his patriarchal prowess. With the shrew and her brood in their rightful place, familial and social order is restored.

Lon Chaney Movies: The Man of a Thousand Faces

Hysterical Night is very nice Movie
-i love it-

I did not have the occasion to see One Hysterical Night movie but I would like to. I enjoy the old movies. I saw Reginald Denny in a version of Anna Karenina where he played with Greta Garbo.