‘Star Wars: The Force Awakens’ NOT to become worldwide top-grossing movie of all time?

Or perhaps, since Luis Buñuel’s Viridiana created a furor at the Cannes Film Festival back in 1961, leaving audiences the world over desperate for a look at the movie condemned by both the Spanish military and the Catholic Church for demonstrating that (at least a certain kind of) charity is a stupidity, not a virtue.

Never mind, the point is that the moviegoing masses were so thirsty for this latest Star Wars offering that they flocked to theaters even more enthusiastically than they had flocked to theaters earlier this year to check out Furious Seven, Jurassic World, Avengers: Age of Ultron, and Minions – all currently among the top ten box office hits worldwide (not adjusted for inflation/currency fluctuations).

As a result, Star Wars: The Force Awakens has shattered myriad box office records not only in the U.S. and Canada but also internationally.

Box office records ain’t what they used to be

Of course, box office record-breaking isn’t what it used to be. For instance, Star Wars: The Force Awakens collected an estimated $57 million from Thursday (Dec. 17) previews vs. Harry Potter and the Deathly Hallows: Part 2‘s $43.5 million back in July 2011. Minor detail: The Force Awakens previews include evening shows that began at 7 p.m., while Deathly Hallows 2 tallied only midnight screenings.

Another minor detail, according to Boxofficemojo.com: The Force Awakens’ figures include tickets sold to marathon Star Wars shows that cost as much as $59.99 each.

But then again, comparing apples and pineapples is perfectly fine – as long as your studio’s apple (or pineapple) comes out on top.

Even so, the Walt Disney Studios’ pineapple from a galaxy far, far away, will likely have to face the (likely) reality that The Force will not be strong enough to propel it to the top of the all-time worldwide box office chart.

Surely you’ve heard of Goldman Sachs and their key role in the 2008 economic cataclysm that is still reverberating around the world. Well, some of those brilliant guys/gals predict that Star Wars: The Force Awakens will arise $1.95 billion worldwide: approx. $750 million in the U.S. and Canada and $1.2 billion internationally.

In inflation-adjusted dollars, that would place The Force Awakens behind two James Cameron epics: 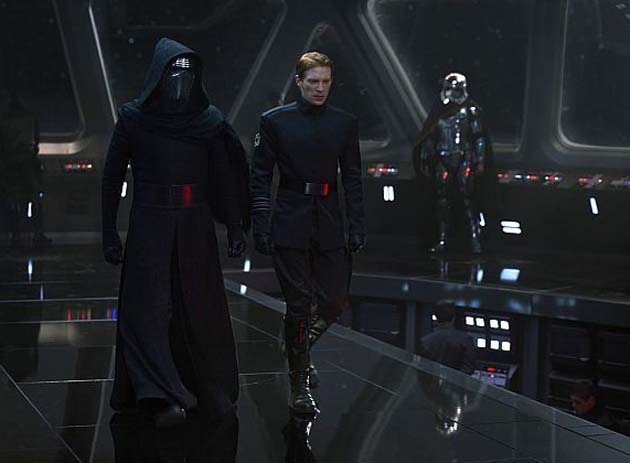 The 2D factor and currency fluctuations

Now, things get a little trickier because the U.S. dollar is unusually strong at the moment. In other words, with some variations here and there the dollar amount of international figures will be lower than they would have been at any time in (at least) the past decade. (See further below more info on the box office performance of Star Wars: The Force Awakens in the U.K. and France.)

And keep in mind that despite the huge box office success of Titanic 3D in China, the original Titanic was a 2D film; in other words, no extra charge for 3D tickets or even PLF screens.

No need for despair

Understandably, this is all very disheartening for Star Wars fans, especially those who wanted to be Darth Vader when they grew up.

But see, these things happen. And remember, in case Star Wars: The Force Awakens does indeed lag behind Titanic and Avatar, there’s always the chance that Star Wars: Episode VIII will do the trick.

‘Star Wars: The Force Awakens’ with Darth Vader (?): The power-hungry bastard wants to be always no. 1.

As found in The Hollywood Reporter, whose source is the Walt Disney Studios, that makes the latest Star Wars movie the biggest single-day grosser in British/Irish box office history – not factoring in inflation. Record-breaking midnight screenings accounted for $3.6 million (£2.4 million) of the total.

The previous record-holder in that part of the world was David Yates’ final installment in the Harry Potter franchise. Starring Daniel Radcliffe, Ralph Fiennes, Emma Watson, and Rupert Grint, Harry Potter and the Deathly Hallows: Part 2, a Warner Bros. release, collected £9.5 million back in July 2011.

Considering how close the Deathly Hallows Part 2 and The Force Awakens figures are, this particular box office record probably wouldn’t hold if ticket sales – the actual measure of a film’s success – were taken into account. Leave that up to France. See further below.

Even so, in the coming days expect lots of breathless reporting online and elsewhere about Star Wars: The Force Awakens as a record-breaking record breaker. 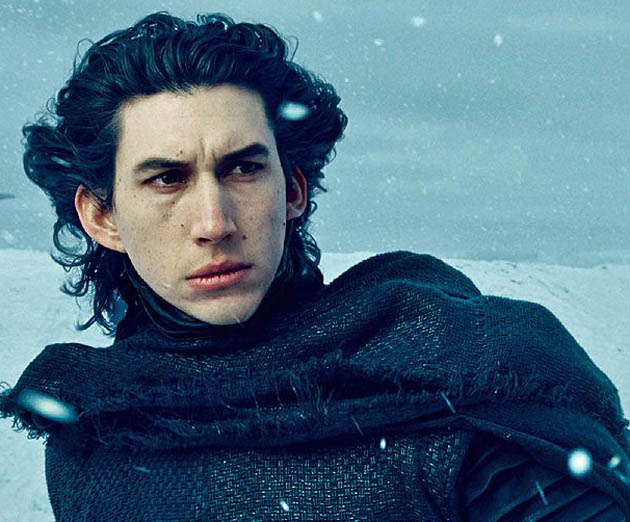 Star Wars: The Force Awakens with Adam Driver a.k.a. Kylo Ren: Box office records to be shattered? Not (so far) in France.

Dec. 17: Star Wars: The Force Awakens represents the triumph of market over matter. Fandango has reported that pre-sales for the latest Star Wars movie has broken the company’s all-time record – and they were not referring to just pre-sales record; the Walt Disney Studios’ sci-fi adventure flick has broken the record for tickets sold at Fandango during the entire run of movies such as Colin Trevorrow’s Jurassic World (the previous record-holder), Francis Lawrence’s The Hunger Games: Catching Fire, and Joss Whedon’s Avengers: Age of Ultron.

And to think that Alec Guinness cannot even be found in Episode 7.

But don’t be too shocked; just do the math. If you’re 44 today, that means you were 6 years old when George Lucas’ first Star Wars movie came out in 1977 and you wanted to grow up to be Luke Skywalker or Princess Leia or Darth Vader. The years pass, you discover that Luke and Leia never existed and will never exist, and that Darth Vader may be your (or somebody else’s) next president or prime minister.

So, what do you do? You buy a movie ticket for the latest Star Wars movie so you can sit back and wonder about what exactly went wrong along the way.

No box office record in France

Directed by Sam Mendes and starring Daniel Craig, Léa Seydoux, and Monica Bellucci, the James Bond flick Spectre sold 850,297 tickets on its opening day (admittedly, a holiday and with previews included) vs. Star Wars: the Force Awakens’ 619,200 (not a specific holiday, but at a time of year when schools are shutting down for the holidays; no previews were tallied, as there were none).

On the plus side, not factoring in inflation or currency fluctuations, in U.S. dollars Star Wars: The Force Awakens had the biggest one-day debut of any Disney film in France and the biggest one-day December debut ever. It also earned about twice as much as Jurassic World on its opening day. 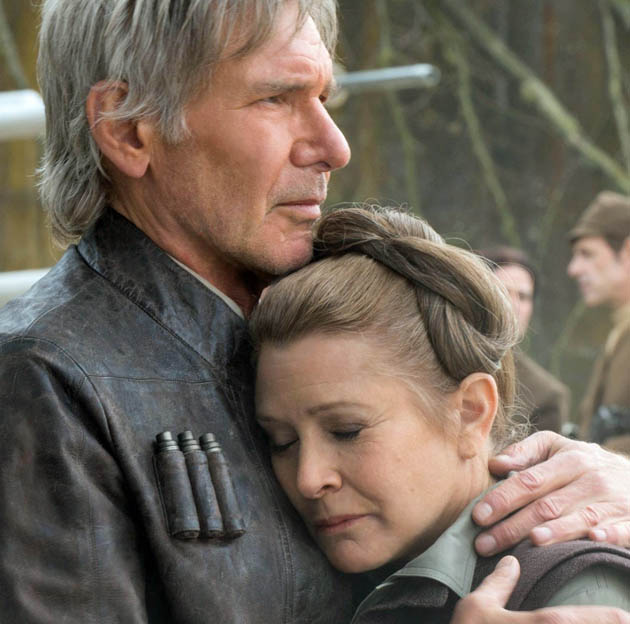 ‘Star Wars: The Force Awakens’ with Carrie Fisher a.k.a. Princess Leia and Harrison Ford a.k.a. Han Solo together again: Back from (and for) the future.

In North America, the hub of the Star Wars fandom, Star Wars: The Force Awakens is expected to break all sorts of box office records. These range from biggest opening weekend debut – in case it does reach $220 million, as some have been expecting – to fastest movie to reach $1 trillion (or whereabouts).

Anyhow, the important thing to remember while reading about all the shattered box office records in the next few days is that most publications out there breathlessly reporting on such matters will be merely regurgitating what the Walt Disney Studios, via its press releases and whatever else, tells them is fact.

Let the critical thinking be with you.

Among the Star Wars: The Force Awakens cast members are: 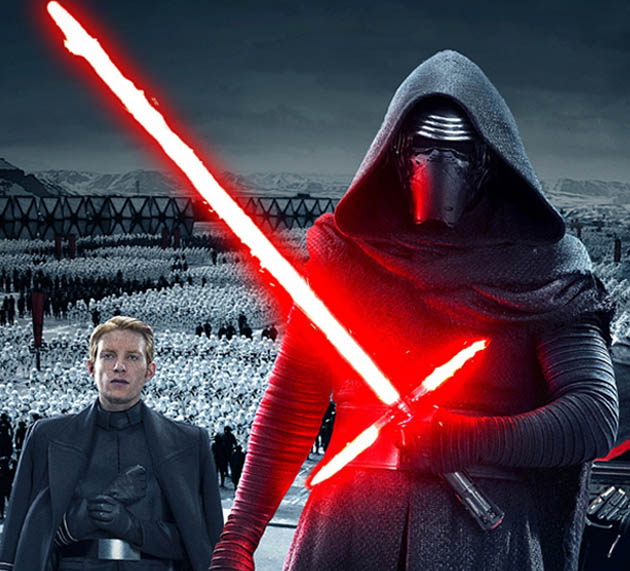 Now let’s go over one Star Wars 7 box office record at a time.

With an estimated $153.52 million from 4,134 locations in North America (remember, this particular North America doesn’t include Mexico – or Greenland, for that matter), Star Wars Episode 7 easily surpassed the previous record-holder.

To find it, we have to go all the way back to … six months ago, when Colin Trevorrow’s Jurassic World, starring Bryce Dallas Howard, Chris Pratt, and a kick-ass (i.e., psychopathic) GMO dinosaur, collected $106.58 million – barely surpassing The Avengers’ $103.05 million back in May 2012.

The Power of The up-and-running Force? Definitely. But in all fairness, The Power of a Holiday Friday as well. Christmas on Friday provided The Force Awakens with a crucial box office boost that runners-up Jurassic World, The Avengers, The Dark Knight, Spider-Man, and Harry Potter and the Sorcerer’s Stone, to name five, lacked.

As for Avatar, its second weekend (back in 2009) coincided with Christmas on a Friday as well – when, that one day, it actually trailed the Robert Downey Jr.-Jude Law combo Sherlock Holmes.

And here’s something that likely boosted The Force Awakens’ box office fortunes: The El Niño effect, part of the Earth’s fast-changing climate, has resulted in spring-like (in some cases summer-like), record-breaking highs in much of the central and eastern United States.

In other words, no winter snowstorms – like those back in late 2009 – to keep potential moviegoers huddled up at home. 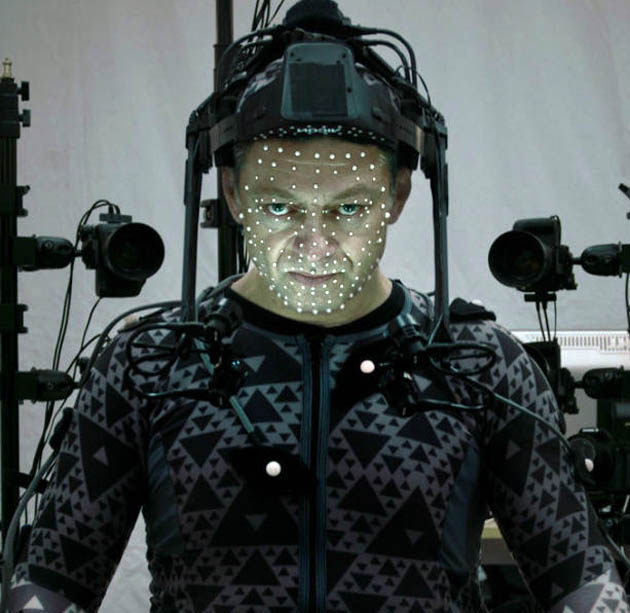 Fastest movie to reach $500 million at the domestic box office

With an estimated $527.49 million after ten days (and a half or so) in North America, Star Wars 7 easily beat another Jurassic World record: Fastest movie to reach $500 million in the U.S. and Canada.

It took Jurassic World 17 days to get there. The Avengers was next with 23 days, followed by Avatar with 32 days.

Fastest movie to reach $1 billion at the worldwide box office

With an estimated $1.09 billion, Star Wars: The Force Awakens beat – once again – Jurassic World to become the fastest movie to reach $1 billion at the worldwide box office: 12 days vs. 13 days.

Of particular importance here is the fact that Star Wars 7 has yet to open in China, whereas Jurassic World‘s 13-day worldwide box office figure included that mammoth international market. 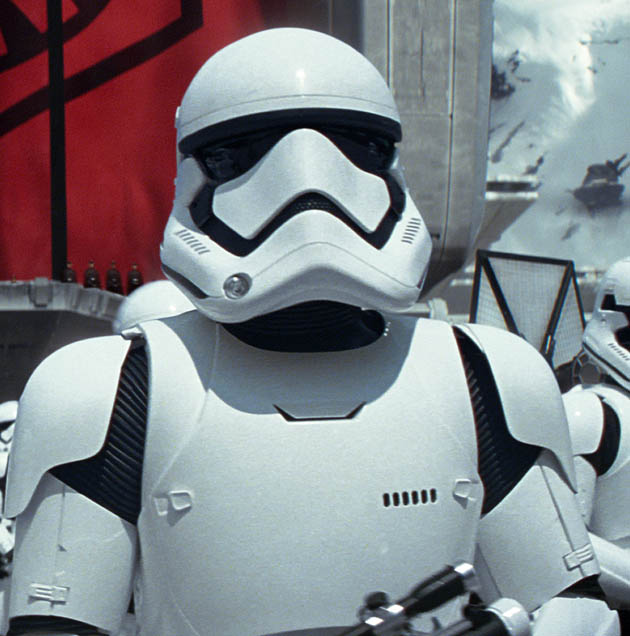 Star Wars 7 with the Stormtroopers: Stylishly striking back in shining armor.

Dec. 26: The 2015 Christmas movie of choice had nothing to do with Santa Claus, elves, reindeer, or Jesus. J.J. Abrams’ Star Wars: The Force Awakens a.k.a. Star Wars 7 smashed the domestic Christmas Day box office record on Friday, earning an estimated $49.34 million from 4,134 locations in the U.S. and Canada.

The previous record-holder was Guy Ritchie’s Sherlock Holmes, which grossed $24.6 million on Christmas Day 2009 – not coincidentally, another Friday.[1]

Next (about to be) broken record

After grossing an estimated $160–$180 million this Christmas weekend, Star Wars 7 should pass both figures sometime on Sunday, Dec. 28 – a mere ten days (and a half, considering Thursday previews) after its release. 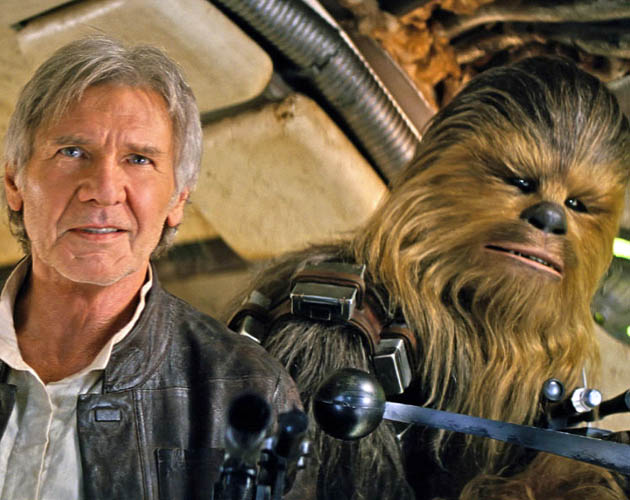 Veteran Max von Sydow’s other film credits include a series of movies directed by Ingmar Bergman (e.g., The Virgin Spring, The Touch), in addition to Hollywood fare such as The Greatest Story Ever Told, Hawaii, The Three Days of the Condor, and Flash Gordon.

Among Abrams’ directing credits are Star Trek and Star Trek: Into Darkness. His screenwriting credits include the TV series Fringe, Lost, and Alias.

The no. 3 movie on the chart is Jay Roach’s Meet the Fockers (2004), which collected approximately $26.2 million adjusted for inflation (actuals: $19.54 million, on a Saturday).

In the Meet the Fockers cast:

Hey Daniel, I hope you to be here and to hold the brief conversation in late January 2016. Worldwide profit of SW will hardly be over 2B. Which will determine third place. And that’s what I liked in this article - real terms (for predicting international profits) and not as hyper fans …

I apologize for my not very good English.

For the first time I see so realistic prognosis article. Thank you for your honesty.

The reason it didn’t break the record is because the movie didn’t release in China yet which is the second largest movie seeing country other than the US. So get off your pretentious high horse and do some actual journalistic work for once in your insignificant life.

Absolutely true re: “Star Wars: The Force Awakens” and second largest ‘movie-seeing’ country China. J.J. Abrams’ film will be getting a Chinese release in early 2016.

A couple of minor details: In case you were too pissed off to notice, that’s not what the article is about and that’s not the record-breaking feat (likely NOT about to happen) discussed in the piece.