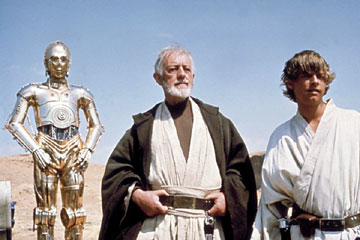 Part four of the Academy of Motion Picture Arts and Sciences’ “Great To Be Nominated” series will kick off on Monday, April 23, with a screening of George Lucas’ cornball space saga Star Wars. The 16-week series will showcase Best Picture also-rans that received the most Oscar nominations in a particular year. This fourth installment will cover films from 1977 to 1992. A different film will be presented each Monday evening, in addition to one Tuesday night screening, at 7:30 p.m. in the Academy’s Samuel Goldwyn Theater in Beverly Hills.

The “Great To Be Nominated” screening of Star Wars coincides with the 30th anniversary of the highly influential and absurdly overrated B sci-fi flick – one of the mid-to-late 1970s Hollywood productions that all but killed off the studios’ attempts at adult filmmaking that had begun about a decade earlier. The film stars Mark Hamill, Carrie Fisher, Harrison Ford, and Alec Guinness.

According to the Academy’s press release, George Lucas and “many of his fellow filmmakers” will be present for a post-film panel discussion.

Part four of the series will continue through August 20. “Great To Be Nominated” will then go on hiatus until Spring 2008, when part five will begin with James Ivory’s first-rate drama The Remains of the Day (1993), starring Anthony Hopkins and Emma Thompson.

The complete screening schedule for part four of “Great To Be Nominated” is as follows:

Other nominees and assorted attractions from each year, including short subjects, behind-the-scenes footage, trailers, and music, will be incorporated into each evening’s program.

Passes for part four of “Great To Be Nominated” will be available starting April 2 at a cost of $30 for film buffs wishing to see the series in its entirety. A $5 discount is available for those who wish to renew their passes from parts one, two or three of the series. Tickets for the first four individual screenings will be available starting April 9 at a cost of $5 for the general public and $3 for Academy members and students with a valid ID. They may be purchased by mail, in person at the Academy during regular business hours or, depending on availability, on the night of the screening when the doors open at 6:30 p.m. Curtain time for all features is 7:30 p.m., and pre-show elements will begin at 7 p.m. The Academy is located at 8949 Wilshire Boulevard in Beverly Hills. For more information, call 310-247-3600.

Five-time Academy Award nominee Sidney Lumet, also the recipient of an Honorary Oscar in 2004, will be the special guest at the “Monday Nights with Oscar” screening of the anti-TV, anti-human imbecility 1976 comedy-drama Network. Lumet will be on hand to take part in a post-screening conversation with The Hollywood Reporter columnist and classy Turner Classic Movies host Robert Osborne – who also happens to be the official biographer of the Academy Awards. The event will be held on Monday, March 19, at 7:30 p.m. at the Academy Theater in New York City.

The frighteningly prescient Network stars Academy Award winner Peter Finch as Howard Beale, an aging television news anchor who, mad as hell, threatens to commit suicide on-air after being fired for poor ratings. Not even “intelligent” bombs being dropped all over Baghdad could be more fun. Beale’s suicide threats bring in a large number of viewers – the same type of human-looking amoebas who spend their days and evenings watching Larry King and other television clowns discuss the details of Anna Nicole Smith’s death and burial place.

Paddy Chayefsky won a best original screenplay Oscar for his cynical – and spot-on – look at human degradation on all levels. Lumet, for his part, received his third Academy Award nomination. (Lumet was also nominated as a director for Twelve Angry Men, 1957; Dog Day Afternoon, 1975; and The Verdict, 1982: he received an additional nod for his – and Jay Presson Allen’s – adapted screenplay for Prince of the City, 1981.)

In addition to Finch and Dunaway, Beatrice Straight won the best supporting actress Oscar that year. Network is one of two movies – the other being the 1951 drama A Streetcar Named Desire – to boast three wins in the acting categories. Finch also made history by becoming the first actor to win a posthumous Oscar. (He suffered a fatal heart attack two months before the ceremony.)

Network also received Oscar nominations in the following categories: Actor in a Leading Role (William Holden, in what may well be the finest performance in his long career), Actor in a Supporting Role (Ned Beatty), Cinematography (Owen Roizman), and Film Editing (Alan Heim).

Now, don’t laugh. The Academy picked Rocky over Network (produced by Howard Gottfried) and Taxi Driver as the best film of 1976. Will those guys ever learn?

The print for this screening of Network is provided courtesy of Warner Bros.

The Academy Theater is located at 111 East 59th Street in New York City. Tickets for the screening are $5 for the general public and $3 for Academy members and students with a valid ID.

You are very mistaken. Faye Dunaway deserved that Oscar for Network.