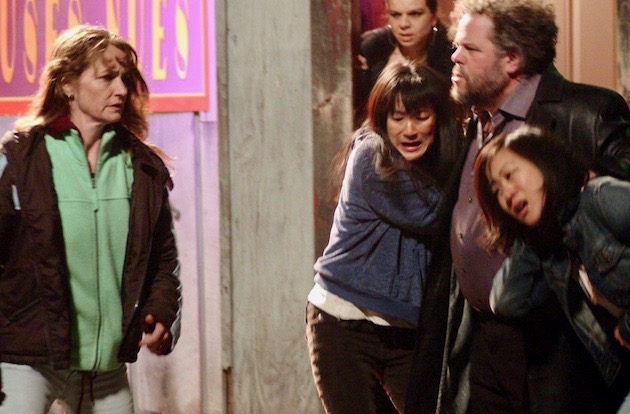 The 2008 Sundance Film Festival Awards have been announced at the festival’s headquarters in Park City, Utah. The Grand Jury Prize Dramatic went to Courtney Hunt’s thriller Frozen River, the story of two economically strapped women (Melissa Leo and Misty Upham) who turn to immigrant-smuggling at the U.S.-Canada border.

Sundance jury members weren’t the only ones impressed with Hunt’s directorial debut. The Los Angeles Times‘ Kenneth Turan, for one, calls Leo and Upham “magnificent,” adding that Frozen River is a “powerful story that makes strong emotional connections.” As a plus, Sony Pictures Classics has acquired the U.S. distribution rights to the film.

More powerful and emotional goings-on can be found in Tia Lessin and Carl Deal’s Trouble the Water, a depiction of the aftermath of Hurricane Katrina and the winner of the Grand Jury Prize Documentary. In the film, New Orleans residents are forced to fend off for themselves as George W. Bush’s government blithely ignores their plight.

The Audience Award – Dramatic went to Jonathan Levine’s The Wackness, which revolves around a teenage marijuana dealer (Josh Peck) who trades pot for therapy sessions with a psychiatrist (Ben Kingsley – Best Actor Academy Award winner for Gandhi, 1982) who happens to have a cute daughter (Olivia Thirlby).

Sony Pictures Classics has also acquired the U.S. distribution rights to The Wackness.

Directed by Jens Jonsson, The King of Ping Pong / Ping-pongkingen was the World Cinema Jury Prize Dramatic choice, in addition to earning Askild Edvardsen the World Cinema Cinematography Award – Dramatic. In the Swedish drama, a bullied, ping-pong-playing teenager (Jerry Johansson) and his popular younger brother (Hampus Johansson) fight it off while dark family secrets come to the surface. Jonsson also co-wrote the screenplay with Hans Gunnarsson.

Lance Hammer was named the Best Director of a U.S.-made narrative feature for Ballast, which is also in competition at the Berlin Film Festival. A portrait of the lasting effects of a suicide on those left behind in a small Mississippi Delta town, Ballast also earned Lol Crawley the Excellence in Cinematography Award – Dramatic. 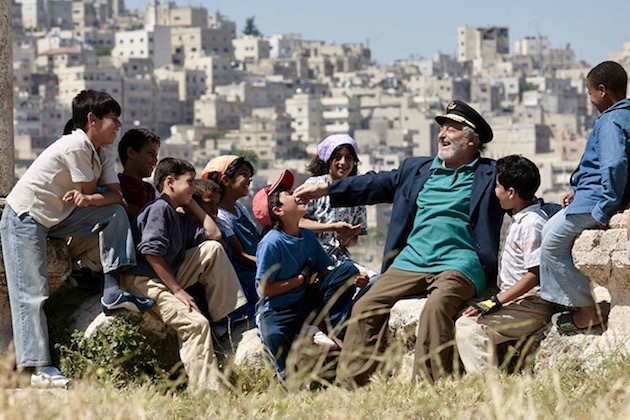 Captain Abu Raed with Nadim Sawalha. Starring Jordanian-born, U.K.-based actor Nadim Sawalha (The Wind and the Lion, The Spy Who Loved Me, Syriana), Amin Matalqa’s Captain Abu Raed is supposed to be Jordan’s first narrative feature in half a century. The socially conscious drama about a case of mistaken identity – locals believe an airport janitor is an airline pilot – was the Audience Award winner at this year’s Sundance Film Festival. Veteran Nadim Sawalha is the father of Absolutely Fabulous actress Julia Sawalha and EastEnders actress Nadia Sawalha.

The World Cinema Directing Award – Dramatic was presented to Anna Melikyan for the Russian comedy-drama Mermaid / Rusalka, about a shy little girl who grows up believing she has the power to make wishes come true. As a grown woman, however, reality gets in the way.

Named after blacklisted screenwriter Waldo Salt (The Shopworn Angel, Midnight Cowboy, Coming Home), the Screenwriting Award was given to Alex Rivera (who also directed) and David Riker for the Mexican-American co-production Sleep Dealer, described as a story “set in a near-future, militarized world marked by closed borders, virtual labor and a global digital network that joins minds and experiences.” In the film, three strangers risk their lives to break down these barriers.

Sleep Dealer also took home the Alfred P. Sloan Prize, handed out to “an outstanding feature film focusing on science or technology as a theme, or depicting a scientist, engineer or mathematician as a major character.” Named after the former General Motors CEO, the prize carries a $20,000 cash award.

A World Cinema Special Jury Prize – Dramatic was awarded to Ernesto Contreras, director of Mexican entry ;Blue Eyelids / Párpados azules, about a woman (Cecilia Suárez) who must come to terms with her emotional neediness while traveling in a tropical paradise with a complete stranger (Enrique Areola).

Marina Zenovich’s Roman Polanski: Wanted and Desired, about the Rosemary’s Baby and Chinatown filmmaker’s problems with the U.S. justice system after he was accused of drugging and raping a 13-year-old girl in the 1970s, earned Joe Bini the Documentary Editing Award. Roman Polanski: Wanted and Desired has been acquired by The Weinstein Company for international distribution, while in the U.S. Zenovich’s film will be handled by HBO Documentary.

The Sundance Film Festival doesn’t hand out awards for acting, but the cast members of Clark Gregg’s Choke – toplining Sam Rockwell, Anjelica Huston, Kelly Macdonald, and Brad Henke – were named the recipients of a Special Jury Prize. Based on Chuck Palahniuk’s novel, Choke is described as a “sardonic story about mother and son relationship, fear of aging, sexual addiction, and the dark side of historical theme parks.”

In the Jury Prize in Short Filmmaking category, two Sundance Film Festival Awards were handed out. The winners were Daniel Robin’s My Olympic Summer and Andrew Okpeaha MacLean’s On the Ice / Sikumi. Among the shorts that received special mention were Amanda Micheli and Isabel Vega’s Oscar-nominated The Crown / La Corona and The Vikings’ W.

It should be noted that there was no apparent nepotism at the Sundance Film Festival Awards: The Guitar, directed by Robert Redford’s daughter Amy Redford, wasn’t handed a single prize. The film follows a young woman (Saffron Burrows) who, after having been told she has only two more months left on Planet Earth, tries to live life to the fullest – partly by seducing a parcel-delivery man and a pizza-delivery girl and by learning to play the electric guitar.

Also worth noting, Andrew Fleming’s comedy Hamlet 2, whose worldwide rights were reportedly sold to Focus Features for a whopping $10 million, was nowhere to be found on the awards list. Considering that it was submitted after the official line-up had been announced, it’s possible that the comedy starring Steve Coogan, Catherine Keener, Amy Poehler, and David Arquette wasn’t up for any Grand Jury awards. Yet one assumes it must have been up for at least the Audience Award. If so, no luck.

Anyhow, the current Sundance acquisition record belongs to Jonathan Dayton and Valerie Faris’ Little Miss Sunshine, sold to Fox Searchlight Pictures for a reported $10.5 million in 2006 – when it was the winner of zero Sundance Film Festival Awards.

Toplining Greg Kinnear, Toni Collette, Steve Carell, Abigail Breslin, Paul Dano, and two-time Best Actor Oscar nominee Alan Arkin (The Russians Are Coming the Russians Are Coming, 1966; The Heart Is a Lonely Hunter, 1968), Little Miss Sunshine went on to gross $59.89 million in the U.S. and Canada (plus a reported $40.63 million internationally), and to win a string of awards, including Oscars for Best Original Screenplay (Michael Arndt) and Best Supporting Actor (Alan Arkin).

The Sundance website, for its part, describes Otto; or Up with Dead People in less concise terms:

“Otto is a handsome, sensitive, neo-Goth zombie with an identity crisis. He looks and smells like a zombie but isn’t certain that he is one. He wanders the streets of the city, never sleeping, until one day – as he is being harassed by hooligans – he ducks into an alley and spots a poster announcing auditions for a zombie film. He soon meets aspiring filmmaker/revolutionary Medea Yarn, who is convinced that Otto, as a confused zombie, is the perfect embodiment of the effects of advanced capitalism on individuals.

Medea begins to make a film about Otto, while simultaneously shooting a film about a gay zombie revolt against consumerist society. After moving in with an actor, Otto begins to remember fragments of his pre-zombie life with a sweet boyfriend. As Medea directs the final, orgiastic scene of her gay zombie film, Otto struggles to access the human emotions buried beneath his zombie exterior.”

Well, let’s just say that whereas Otto is (relatively speaking) mostly well behaved, some of the supporting players engage in a mix of explicit (gay) sex and gore – the aforementioned “orgiastic scene,” for one – that will likely prevent Otto; or Up with Dead People from becoming a mainstream multiplex hit.

Below is the full list of the 2008 Sundance Film Festival Awards.