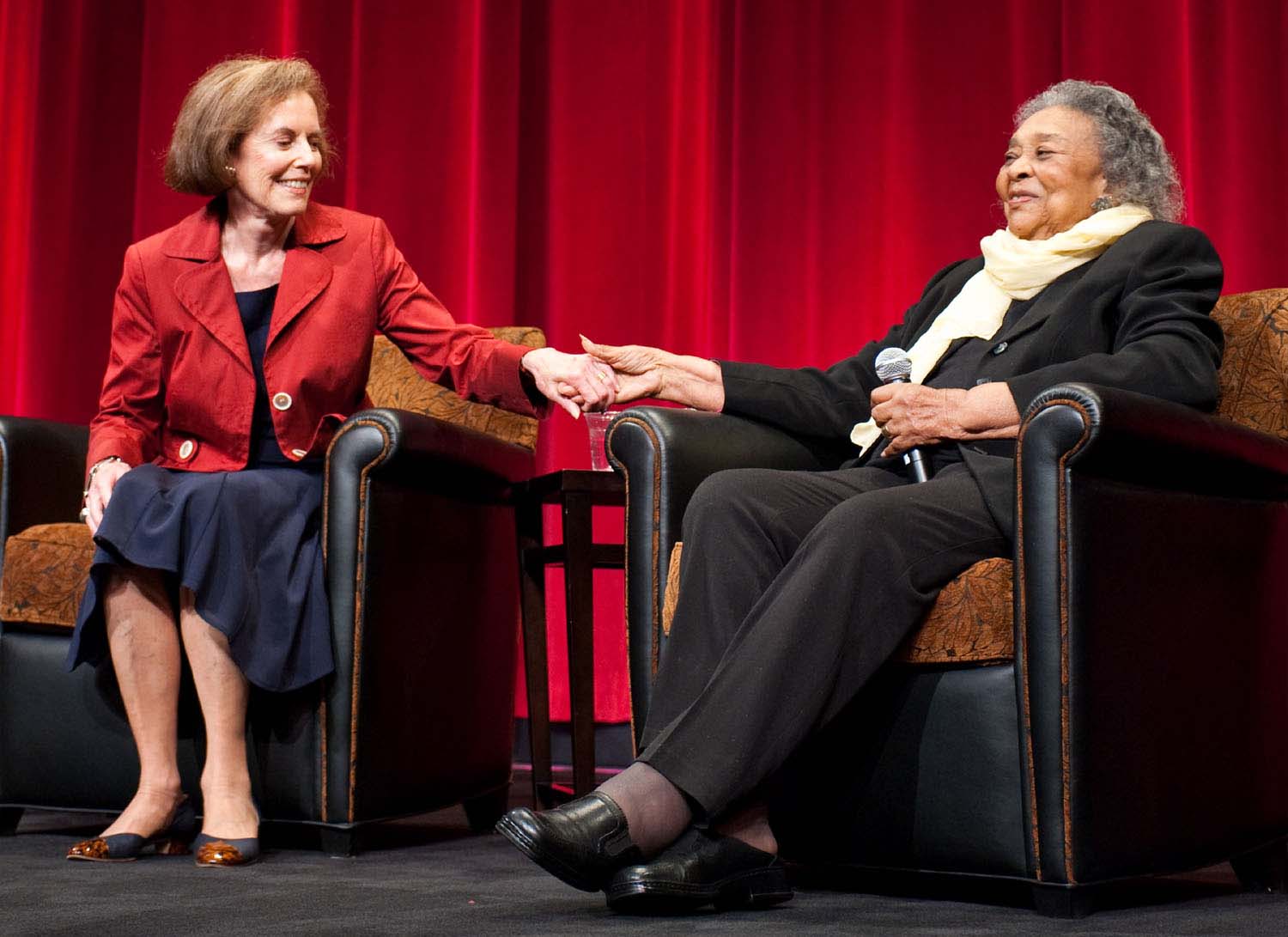 In Imitation of Life, white Susan Kohner plays black Juanita Moore’s daughter (hey, that’s Hollywood). In real life, however, Kohner doesn’t have a black mom. Her mother is Lupita Tovar, 98, known as “Mexico’s Sweetheart” back in the early 1930s and the star of the Spanish-language version of Dracula. Her father was producer Paul Kohner, among whose credits was the Margaret Sullavan movie Next Time We Love and German actor-director Luis Trenker’s Depression Era drama The Prodigal Son. Paul Kohner was also a powerful Hollywood agent, among whose clients was Lana Turner.

Susan Kohner, who retired from films after marrying fashion designer John Weitz in 1964, also happens to be the mother of screenwriter-directors Chris Weitz and Paul Weitz; the latter was also present at the Academy’s Imitation of Life presentation. Among the Weitz brother’s film credits are American Pie, About a Boy, In Good Company (Paul Weitz only), and The Twilight Saga: New Moon and The Golden Compass (Chris Weitz only).

Juanita Moore continued making sporadic film appearances until 2000, when she was featured in a small role in the Disney movie The Kid, starring Bruce Willis.

Claudette Colbert and Louise Beavers were featured in the 1934 version of Imitation of Life, based on Fannie Hurst’s novel. Directed by John M. Stahl, the Best Picture Academy Award-nominated film also featured Fredi Washington (an actual part-black actress) as Beaver’s daughter, in addition to Warren William and Rochelle Hudson. 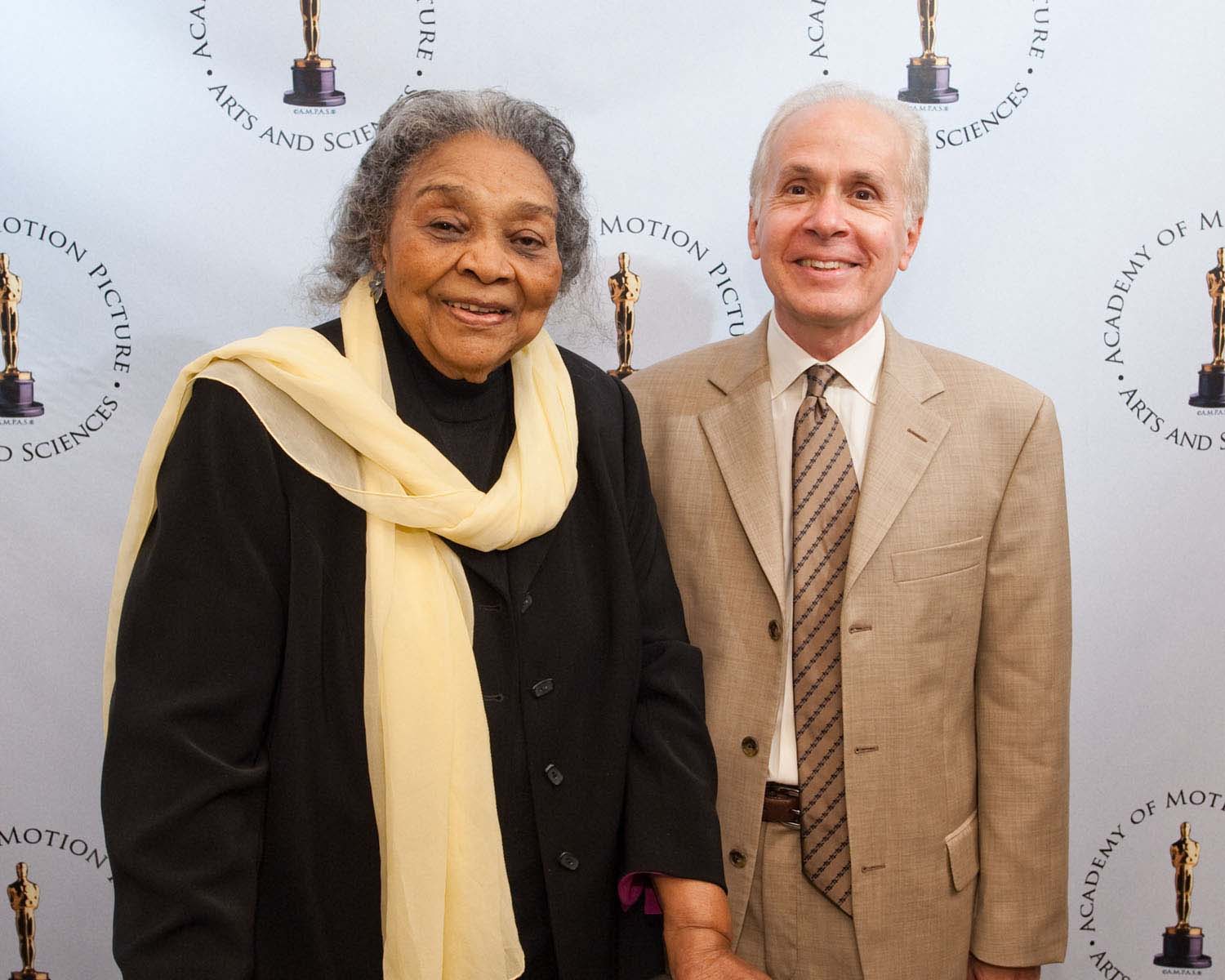 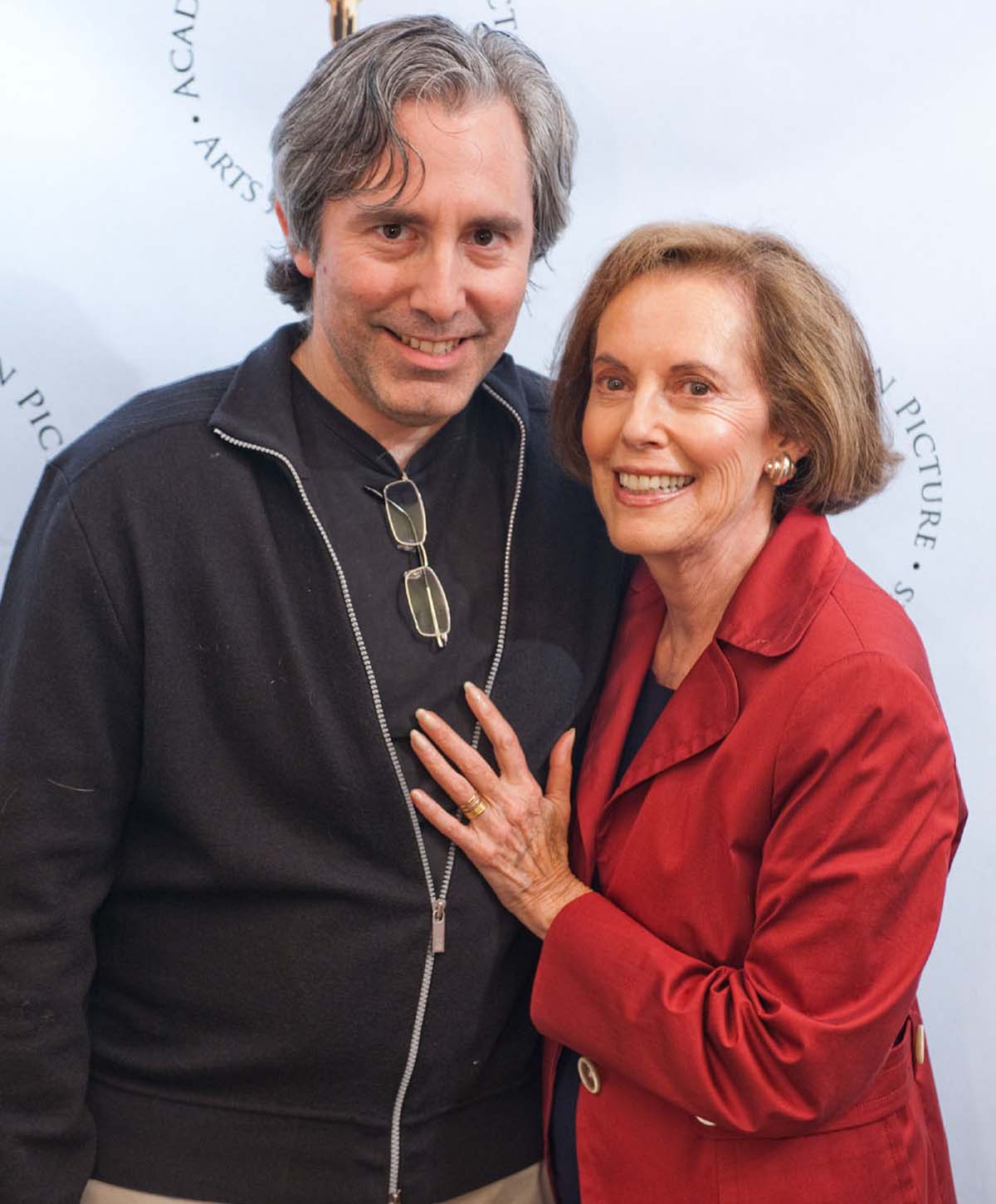 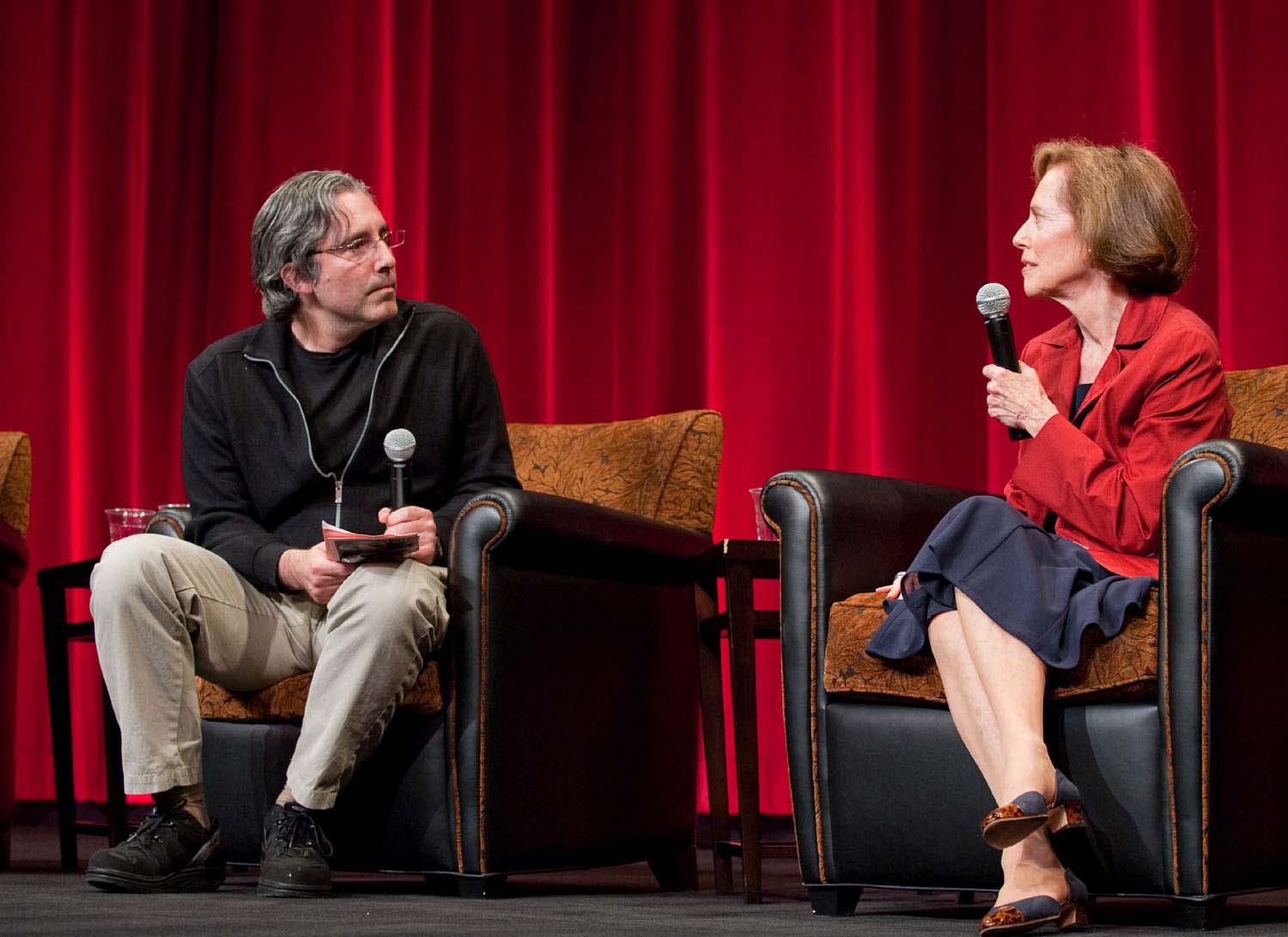 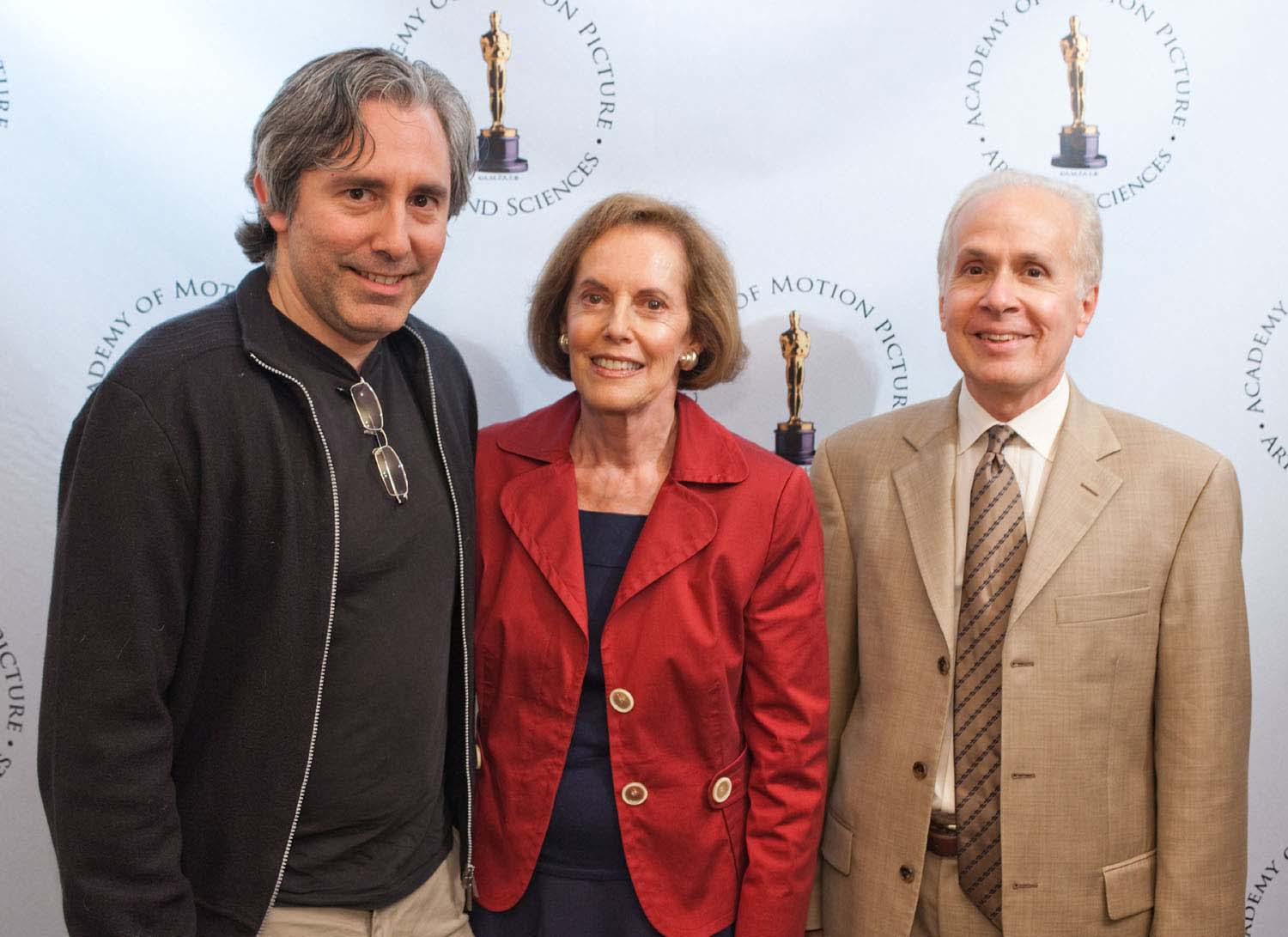 Recommended for You
Douglas SirkLana Turner

God bless Susan Kohner! I thought she was dead. I dearlly loved her performances! I am just a fan and my name is Robert Bateman in Boise, Idaho. I have watched Imitation of Life many times over the years. Lana Turner also gave a brilliant performaces, and John Gavin who died in 2018. I wish Hollywood would go back to making decent films with no swearing and no nudity.l When the Lord Jesus returns, then films will be awesome for always!

Just watched you in episode of wagon train,playing an Indian girl. Wonderful

???? I have appreciated THiS MoViE ever since I First saw it- BACK in my TEEN YEARS. THiS is wonderful REPORTING & PHOTOS!?? Thank you, so much for sharing.

When I was 10yrs old and couldn’t sleep one night back in 1971 I watched Imitation of Life and was and still to this day my favorite movie of all time ever. Juanita Moore and Susan Kohner OMG!! Great!!! I have the dvd and I have it on dvr just to have it at my finger tips. I have two daughters and could not wait until they were old enough to watch the movie and they loved it (they were 11 and 12 at the time) Now they are 34 and 35 and every now and then we get together just to watch the movie and cry everytime!!!! LOVE IT!!!!!

Wow, just heard Juanita Moore passed away this year. Imitation of Life is one of my favorite movies. I still cry when I hear Mahalia Jackson sing “The Troubles of the World”. I must have seen this movie 20 times or more, I think anyone who sees this movie has the same reaction, tear jerker. The one line that I use as a trivia is “My daughter was borne to be hurt”. Jesus what a statement .
Lana Turner was so beautiful, her clothes would stand up in today’s fashion, the wardrobe was amazing.
Rest in Peace Juanita Moore, this movie will outlive us all.

May you rest in peace Mrs. Moore . I saw the movie at age 10 in 1959, everyone was talking about what a great movie it was and how they cried. Well,when Ms. Mahalia Jackson sang “Soon I will be finished with the troubles of this world” I lost control and wept. My prayers to the family.

At age 5 my whole family sat and watched i.o.l. 1967. At that young age i could’nt take my eyes off the t.v. screen. Over the years, each time it is on, i am there. My cousin bought me the dvd a few years ago now(wow wow wow wow)the most precious gift(other than my life) i have ever recieved. Juanita Moore is the spitting image of my aunt, who was just as elegant, warm, caring, she was juanita on the screen. The film touched me so deeply.I have recently made the same floral blanket for my aunts casket 16th dec 13. Mahalia jackson juanita Hutchinson- Brown, is the name we’ve chosen for my new grandaughter, (which both daughte & partner , after wathing the film, are happy with). Mahalia jacksons performance is just her, PERFECTION. The letter to the milkman.WOW. I could go on forever. Juanita Moore Rest in Divine Eternal Peace.

What a beautiful film, I remember my dad taking me to this film as a young child and how sad I felt not realizing that there was such a thing as not being liked because of the colour of your skin, I am now 57 and still do not understand this behaviour, I still pray for equality of all kind in our world.: :-)

I agree Mary Margaret. Let’s pray for peace and equality. The only way is to get rid of the old GOP and new radical and trump. Let’s pray the John Lewis Voting act passes.

R.I.H. Ms. Juanita Moore, one of the best actresses of her time.

Boy, I watched the Imitation of Life, I wept (no joke)!
Once you see it, you will never forget it, no matter how hard you try.

my family is of a wide mixed race,
the Imitation of life was heart wrenching…one of our family’s favorite movie .
we are so thankful to Juanita moore, lana turner, to all the actors,to the crew…
to everyone who supported this movie and others like it .
we hope they will perhaps see this message and know we are fans of their acting !
Debe & Linda .

You talked about Susan and didn’t talk about Juanita?

Truly one of the greatest films that was ever made in movie history. I am now 53 having watched it many times. When a film can make you cry each time you watch it, that kind of power defines classic.

I have watched this movie over 30 times! I am 47 yrs old and started watching it at around the age of 10. It is my ALL TIME favorite movie. I tell everyone about it. Whenever it is on, my dad calls me to tell me to record it and then I call everyone I know to tell them that they HAVE to watch it. It is truly a classic and I will forever love it and link it to my childhood. Juanita Moore and Susan Kohner were my two favorite actresses in the film. They were so real to me- the acting so genuine. The funeral scene always ripped me apart, it still does. There is no way possible to watch that and not be overcome with tears.

Dear Deborah, In the article while mentioning that Susan (white) played the daughter of a black mother, you then said “hey, its Hollywood”. I know two unrelated people who could pass for white while both of their sets of parents are black. Perhaps you’ve never met anyone like that but I just thought you should know that’s not a Hollywood thing, it’s a biological thing.

Thanks for the article.

Juanita and Susan, thank you both for realistically portraying those characters in the “Imitation of Life”. As a sixteen year old I watched this movie late one Sat. night in 1969. That night God used this movie to speak to my heart. My parents had recently divorced and my father did things while intoxicated that embarrassed me in front of my friends. I wanted to run away where no one knew my father. I didn’t like the way I felt and when Juanita talked about how God loved her daughter and she would be alright, I believed that for myself. As far as I can remember, that night I prayed for the first time; “God, if you are real like this lady believes you are, I want you to take over my life.” I slept so peacefully that night. The next day I walked to a church that i had visited with a friend. I went forward, filled out a little card and answered a few questions. Two weeks later I was dunked under water (baptized). I didn’t understand much about God or Jesus but there was a major change in my life. I started loving my father and in general my life took a turn. Thank you again for being a conduit for God’s love to redeem this young man now sixty.

She (Susan Kohner) should have the the Oscar . One of the best film of all time.

Am watching I/o/L right now on TCM….Wow. Can’t stop the tears!
It’s always been a great classice. Never tire of seeing this movie.

I WATCHED THIS MOVIE AS A LITTLE GIRL AND I CRIED. NOW IM WATCHING IT AS A ADULT. AND IM STILL CRYING
I DON’T THINK I WILL EVER RUN OUT OF YEARS WHEN IT COMES TO THIS MOVIE.
THERE. IS SO MUCH. TRUTH IN THIS STORY TILL IT’S. BREATH TAKING. THE CAST WAS ALL GREAT. LANA TURNER WAS JUST FABULOUS. AFTER WATCHING THIS MOVIE IT BE DAYS OF REALITY SEARCHING. THANK YOU GOD FOR ALL OF THE CAST IN THIS MOVIE. AND LANA TURNER IS THE FAR GREATEST. ACTRESS THAT EVER LIVED. JUANITA MOORE WAS SO GOOD….SUSAN KOHNER WAS GREAT AND SANDRA DEE..DONT FORGET LITTLE SUSIE AMD LITTLE SARAH JANE THEY WERE GREAT ALSO.
THIS IS A CLASSIC MOVIE OF A. LIFETIME.
I HAVE MY OWN PERSONAL COPY ..THE BEST MOVIE YET

Imitation of Life is my favorite movie of all times. I always cry when I watch the movie. One day it came on and I said I wasn’t going to cry and I didn’t, but later it came on and “guess what” I cried. The movie has a good story-line. Lana Turner is breath taking, very beautiful. Her blonde hair, blue eyes and she is wearing that long white gown with that blue scarf drape around her chest, just beautiful. John Cavin is tall dark and handsome.

I’am glad to that both Ms.Moore and Ms.Kohner are still around and you both look great! I just saw the movie last night and I was telling my granddaughter about it. And that everytime I saw it I cried. I told her I’am older now and wouldn’t cry. But of course I cried a little. The part when Sarah Jean came to the funeral and cried on the coffin. This movie was so emotional at the end you couldn’t just stay dried eyed. You both were excellent actors. I was only 5 when the movie was made. Thank You so much Channel One for choosing Imitation Of Life. God Bless You All,G.Peters,Las Vegas,Nv.

One of my favorite movies. I watch it everytime it’s on!

one of the best films ever made

Wow, I had no idea that Kohner and Moore - let alone Lupita Tovar! - were still around. Good stuff.