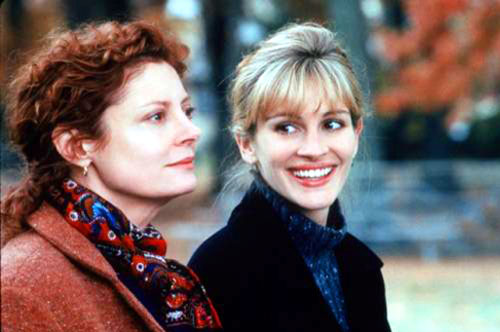 Susan Sarandon will be the recipient of the Stockholm Lifetime Achievement Award 2009 to be presented at the 20th Stockholm International Film Festival (website), which runs Nov. 18–29. Sarandon will be accepting the honor in person.

As per the Stockholm Film Festival’s press release, “the Stockholm Lifetime Achievement Award is presented annually to honor and acknowledge a longstanding career and an outstanding achievement in cinema. The prestigious award, in the shape of a 16 lb Bronze Horse (the heaviest film award in the world), is a paraphrase on the Swedish Dala horse, designed by designer Fredrik Swärd.”

Below is the festival’s “motivation” for honoring Susan Sarandon:

“A Doris Day for the counterculture generation, an outlaw heroine punching the gas of a blue ’66 Thunderbird, a devout nun who finds a way to be spiritual in a spiritless world – the roles Susan Sarandon has played often gain a life […] of their own beyond the films themselves. Reflection, seduction and rebellion animate her characters and seem to be the key tools in her actor’s repertoire. As a result, her multifarious portrayals of strong female characters display a perfect blending of the feminine and feministic, making Susan Sarandon an ideal recipient of this year’s award.”

The New York-born (Oct. 4, 1946) Sarandon began her film career in 1970, in a supporting role as a junkie in Joe, starring Peter Boyle. She achieved cult status following the successful midnight screenings of The Rocky Horror Picture Show (1975) in the late ’70s, and earned her first Academy Award nomination for Louis Malle’s Atlantic City in 1981. (She should have received – at the very least – three other previous nods: for the otherwise dreadful The Other Side of Midnight, for Malle’s daring Pretty Baby – in which Sarandon delivered a daring performance to match – and for the otherwise unfunny comedy Loving Couples.)

Sarandon was way underused in the ’80, but had good roles in the otherwise irritating The Witches of Eastwick (1987); the otherwise disappointing (and very well-received by most critics) Bull Durham (1988), opposite Kevin Costner and future off-screen companion Tim Robbins, and in two underrated goodies: Tony Scott’s vampire flick The Hunger (1983), in which her sex encounter with Catherine Deneuve (above) is one of the very best such sequences ever filmed for a mainstream production, and Frank Perry’s comedy-thriller Compromising Positions (1985), playing a suburban housewife attempting to solve a murder mystery.

Three more well-deserved Oscar nods (Thelma and Louise [above, with Geena Davis], Lorenzo’s Oil, The Client) and one win (Dead Man Walking) would follow in the ’90s. But unfortunately, Sarandon’s next film after her Academy Award was released two years later, in early 1998 to be exact – a little too late for the Oscar to have much (if any) impact at the box office. Twilight, a poor mystery thriller starring Paul Newman, flopped badly.

Despite the highly successful (and highly saccharine) Stepmom, released in late ’98 and in which she co-starred with Julia Roberts (above) and Ed Harris, Sarandon’s career hasn’t been quite the same since. Poorly received vehicles such as Anywhere But Here (1999), with Natalie Portman; The Banger Sisters (2002), opposite Goldie Hawn; and Shall We Dance, with Jennifer Lopez and Richard Gere, haven’t help matters any.

In the last ten years or so, Sarandon has alternated between television and film work, big-studio and independent films, leads and supporting roles – though there’s still hope that in the near future she’ll land the right Meryl Streep-like vehicle that will restore her to the very top.

Among Sarandon’s most notable recent acting jobs have been supporting roles in Alfie (2004) – unluckily, one of a series of flops starring Jude Law – Cameron Crowe’s Elizabethtown (2005), doing a cool tap dancing routine in an otherwise uncool romantic drama; Paul Haggis’ In the Valley of Elah (2007), as Tommy Lee Jones’ wife; and the box office hit Enchanted (2008; above, with James Marsden), as a bitchy witch making life difficult for Amy Adams and Patrick Dempsey. Sarandon also had an important lead in the TV movie Bernard and Doris, playing billionairess Doris Duke.

And here’s hoping Susan Sarandon will get a 2010 Best Supporting Actress Oscar nod for Peter Jackson’s supernatural drama-thriller The Lovely Bones (above, with Saoirse Ronan). If not for that one, then perhaps for Leaves of Grass or Solitary Man or Peacock, all of which may (or may not) reach US screens later this year. Needless to say, I haven’t seen any of those movies – but since we’re speaking of Susan Sarandon, no matter how poor the vehicle her performance pretty much has to be award-worthy.

Admittedly, I’ve been a fan since I saw her punch a guy in the stomach in Atlantic City – and I’m not at all into violence. But no film actor ever threw a punch so effectively and with such flair. In fact, John Wayne, Arnold Schwarzenegger and the like should have taken lessons from her. Sarandon’s off-screen liberal views and the fact that she and companion Tim Robbins stood strong against the Iraq War long before that stance became fashionable only made me admire her even more.

Okay, so it’s true that there are many others who deserve Lifetime Achievement awards just as much as Sarandon. But really, no one deserves such an award more than she does.

Check out RockyMusic: The Musical World of Rocky Horror website.