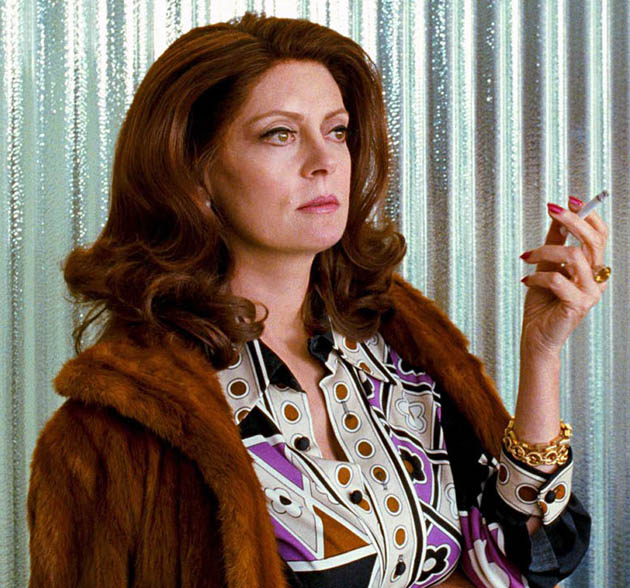 Susan Sarandon & Tim Robbins’ two-decade-plus relationship has come to an end. The couple were never married; Sarandon (born Susan Abigail Tomaling) was the ex-wife of Chris Sarandon (1967–1979), best known for his Oscar-nominated role as a transsexual-to-be in Dog Day Afternoon and for his vampire in Fright Night.

Sarandon and Robbins met while filming Bull Durham back in 1988. As neither one had been wanted in the baseball-themed production directed and written by Ron Shelton and starring Kevin Costner, the two undesired performers developed a solid bond that evolved into a romantic relationship.

Despite Bull Durham‘s financial and critical success, Sarandon and Robbins were never paired up in another movie, though she starred for him in Dead Man Walking (1995), which earned her a Best Actress Oscar and him a Best Director nomination, and made cameo appearances in two other movies he directed, Bob Roberts (1992) and Cradle Will Rock (1999), in addition to one in which he starred, Robert Altman’s The Player (1992).

Off camera, Sarandon and Robbins dared to publicly denounce the U.S.-led invasion of Iraq long before it became fashionable – and politically safe – to do so. The duo were vilified in the right-wing media, online chat rooms, and, according to Sarandon herself, even in schools. (This, ironically, after they had supported Green Party presidential candidate Ralph Nader – blamed in large part for the eventual Electoral College victory of George W. Bush, one of the orchestrators of the Iraq War Sarandon and Robbins were so adamantly against.)

In fact, the buzz surrounding The Lovely Bones was so strong that prior to its Dec. 11 opening Jackson’s supernatural crime drama had been one of the two or three films to beat this awards season. But once the first reviews came out, with critics calling it a simplistic adaptation of a complex novel, The Lovely Bones has quickly fallen off the season’s radar.

In the role of a sassy, hard-drinking grandmother, Sarandon was never a top awards season contender and still isn’t. Reviews for her performance have been mixed, with Kenneth Turan in the Los Angeles Times complaining that she’s over the top, while Stephanie Zacharek remarks in Salon.com that once Sarandon’s grandma “shows up with her cleavage, … the mood brightens considerably.”

None of the critics groups handing out Best of the Year awards has mentioned Sarandon even as one of their runners-up. Additionally, she has been left out of both the Golden Globe and SAG Award nominations.

Even so, could Susan Sarandon – as a result of all the publicity surrounding her split from Robbins and the inevitable outpouring of sympathy & condolences to follow – land a Best Supporting Actress Oscar nomination?

True, a relationship break-up isn’t the same thing as the tracheotomy that earned Elizabeth Taylor a Best Actress Oscar for Daniel Mann’s melodrama Butterfield 8 back in early 1961, or the recovery from a debilitating stroke that likely helped Patricia Neal land a nomination – no matter how well deserved – for Ulu Grosbard’s 1968 family drama The Subject Was Roses.

More recently, Heath Ledger’s unexpected death surely helped him win the Best Supporting Actor Oscar earlier this year – once again, no matter how well deserved – for his performance as the Joker in Christopher Nolan’s The Dark Knight.

Sarandon’s personal circumstances are hardly that dire. Still, enough Academy of Motion Picture Arts and Sciences members liked the Atlantic City, Thelma & Louise, Lorenzo’s Oil, The Client, and Dead Man Walking actress, thus guaranteeing her four Academy Award nominations and one win over the course of 15 years. Although the last time that happened was nearly 15 years ago, most of those people who voted for Sarandon then are quite likely still around now.

On the other hand, working against Sarandon’s chances is the fact that this year the competition is unusually strong, e.g., Mo’Nique for Precious, Vera Farmiga and Anna Kendrick for Up in the Air, Penélope Cruz for Nine, to name four that have earned both Golden Globe and SAG Award nominations.

But considering the way Oscar votes are tallied, one shouldn’t be too surprised if Susan Sarandon’s name is included among the five finalists come next February.

All she needs is a relatively small segment of ardent Academy members – 16 percent of voters, who would place her in their no. 1 or no. 2 spot – to have a good chance at landing a nomination. And that’s something she may well have.

The Lovely Bones’ marketing people should consider adding more “For Your Consideration” ads for their film’s bosomy, booze-loving granny.

Sexiest stars: Megan Fox in Transformers: Revenge of the Fallen. While The Twilight Saga: New Moon performer Robert Pattinson was the sexiest actor according to voters in an online poll, Megan Fox was a double winner: Sexiest Actress & Worst Actress for her performance – or rather, appearance – in Michael Bay’s latest mind-numbing box office hit, Transformers: Revenge of the Fallen. Fans’ reaction to the brainless film was schizophrenic: Worst Film, Best Action Movie, second-Most Disappointing Movie (behind Sacha Baron Cohen’s Brüno).

In other awards season news: We all know what 2009 movies critics’ like, since they’ve been getting together to announce this year’s best since early December. But what about movie fans? Or at least those (reported) 200,000+ fans who have bothered to vote in a poll at moviephone.com? Most importantly: Who would be their choices for the year’s sexiest stars?

Sandra Bullock was the Best Actress for John Lee Hancock’s sleeper blockbuster The Blind Side, but Megan Fox, the female star of Michael Bay’s Transformers: Revenge of the Fallen, was a double winner: Sexiest Actress and Worst Actress of the Year. There are worse combos, you know?

Curiously, voters were markedly divided when it came to Transformers: Revenge of the Fallen. Bay’s saga about the eternal fight between robots and humans (or what passes for human in today’s blockbusters), was chosen as the year’s Worst Film, Best Action Movie, and the second-most disappointing release after Sacha Baron Cohen’s Brüno.

The Lord of the Rings trilogy filmmaker is now a knight as a result of his “services to film.” Among the movies Jackson has provided services for are:

Peter Jackson’s latest, The Lovely Bones, starring Mark Wahlberg, Rachel Weisz, Saoirse Ronan, Stanley Tucci, and Susan Sarandon, was one of the most anticipated films of 2009. Yet the crime drama/fantasy has been generally panned by critics and has failed to get any awards season buzz.

Much luckier with both critics and audiences has been Neill Blomkamp’s sleeper hit District 9, on which Jackson was credited as a producer.

Jackson and Guillermo del Toro are currently working on a two-movie prequel to the Lord of the Rings movies, The Hobbit. Filming is due to begin in New Zealand in early 2010. According to reports, Ian McKellen (another knight) should reprise his role as Gandalf.

New Zealand knights and dames are sanctioned by Britain’s Queen Elizabeth II, who happens to be New Zealand’s official head of state to this day. 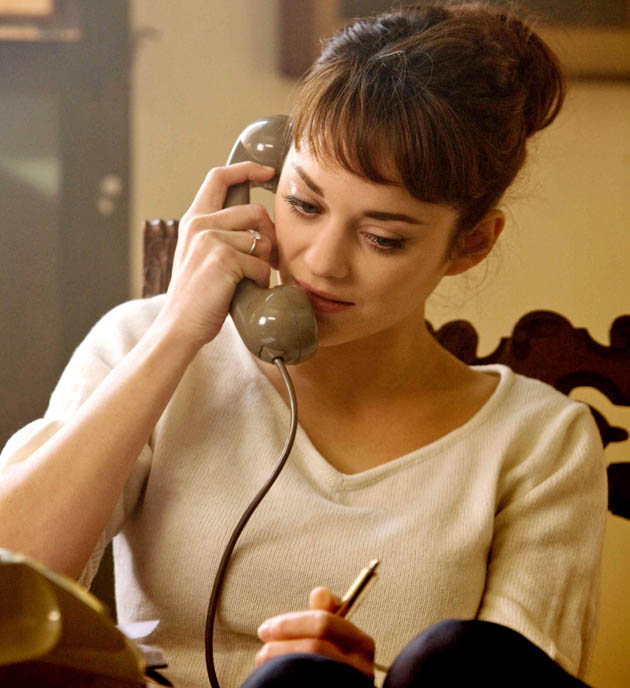 Marion Cotillard in Nine. Rob Marshall’s (reportedly) $80 million-budgeted musical hasn’t found much love this awards season, but Best Actress Oscar winner Marion Cotillard (La Vie en Rose, 2007) has found herself listed a few times as either a Best Actress or a Best Supporting Actress nominee in various critics groups’ lists. Unsurprisingly, Cotillard will be honored at the Oscar buzz-friendly Palm Springs Film Festival; the Nine actress will be handed the Desert Palm Achievement Actress Award in January 2010. Oscar chances for Cotillard, however, remain slim despite a Golden Globe nomination for Best Actress in a Motion Picture Comedy or Musical.

More awards season news: Marion Cotillard and Quentin Tarantino will be honored at the 2010 Palm Springs Film Festival. Cotillard, one of the stars of Rob Marshall’s coolly received musical Nine, will be handed the Desert Palm Achievement Actress Award while Tarantino will get the Sonny Bono Visionary Award.

The other 2010 Palms Springs honorees are:

It’s no coincidence that Marion Cotillard and Quentin Tarantino have been chosen as Palm Springs Film Festival honorees this awards season. After all, both are potential Oscar contenders and Palm Springs is just a couple of hours east of Los Angeles.

In Nine, based on the Broadway show that is itself a musical adaptation of Federico Fellini’s 8½, Cotillard plays the wife (Anouk Aimée in the original) of Daniel Day-Lewis’ crisis-prone film director (Marcello Mastroianni in the original).

Image of one of sexiest stars Megan Fox in Transformers: Revenge of the Fallen: DreamWorks Pictures / Paramount Pictures.

Wow, I didn’t know they split up. Sad really, as they both seem normal. I guess even normal people give up sometimes…. :(

Kristen Stewart is the perfect Bella .. All around the casting was perfect, everyone had so much so much angst that they fit the story perfectly

I really like Kristen Stewart, for me the best young actress :)
she was great in New Moon

I absolutley thought that “Jacob” was nothing to write home about in the first Twilight movie but after having seeing him in New Moon i have really changed my thoughts. He does not disappoint. I really can’t wait for Eclipse!