Oscar winners Eva Marie Saint and Ernest Borgnine, The Birds actress Tippi Hedren, Oscar-nominated filmmaker Norman Jewison, and Turner Classic Movies hosts Robert Osborne and Ben Mankiewicz are some of the 2011 TCM Cruise passengers shown in the picture above. The group pic was posted on TCM’s Twitter page, as the five-day TCM Cruise kicked off on Dec. 8.

Eva Marie Saint won the 1954 Best Supporting Actress Academy Award for her debut film performance as Marlon Brando’s love interest in Elia Kazan’s socially conscious drama On the Waterfront. Saint’s other film credits include Fred Zinnemann’s A Hatful of Rain (1957), Alfred Hitchcock’s North by Northwest (1959), Otto Preminger’s Exodus (1960), and John Frankenheimer’s All Fall Down (1962) and Grand Prix (1966), and Garry Marshall’s Nothing in Common (1986).

Tippi Hedren was discovered by Alfred Hitchcock – with whom she had a serious falling out later on. Her movies include the following: 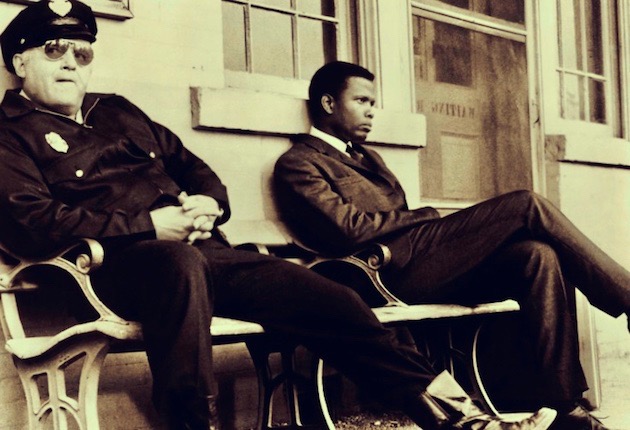 In the Heat of the Night with Rod Steiger and Sidney Poitier. TCM Cruise guest Norman Jewison’s 1967 Best Picture Academy Award-winning crime drama In the Heat of the Night stars Sidney Poitier as a Philadelphia cop investigating a murder in a small Mississippi town. Best Actor winner Rod Steiger is the local sheriff who, at first reluctantly, helps in the investigation. The film was the second consecutive Norman Jewison effort to be shortlisted in the Oscars’ Best Picture category; the previous year, the satire The Russians Are Coming, the Russians Are Coming, costarring Jewison’s fellow TCM Cruise passenger Eva Marie Saint, had been in the running.

Norman Jewison’s other movie credits include:

A former actor with a handful of movie roles (e.g., uncredited bits in Spartacus and Twenty Plus Two), host Robert Osborne has become the “face” of Turner Classic Movies.

The other side of TCM’s face is host Ben Mankiewicz, grandson of Citizen Kane co-screenwriter Herman J. Mankiewicz and grand-nephew of Joseph L. Mankiewicz (A Letter to Three Wives, All About Eve, Suddenly Last Summer).

Rod Steiger and Sidney Poitier In the Heat of the Night image: United Artists.