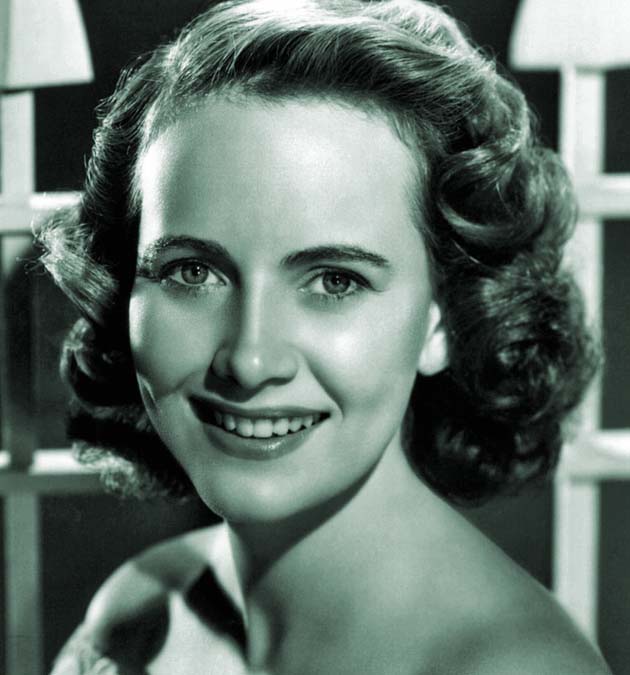 Teresa Wright movies on TCM: ‘The Little Foxes,’ ‘The Pride of the Yankees’

Pretty, talented Teresa Wright made a relatively small number of movies: 28 in all, over the course of more than half a century. Most of her films have already been shown on Turner Classic Movies, so it’s more than a little disappointing that TCM will not be presenting Teresa Wright rarities such as The Imperfect Lady and The Trouble with Women – two 1947 releases co-starring Ray Milland – on Aug. 4, a “Summer Under the Stars” day dedicated to the only performer to date to have been shortlisted for Academy Awards for their first three film roles.

TCM’s Teresa Wright day would also have benefited from a presentation of The Search for Bridey Murphy (1956), an unusual entry – parapsychology, reincarnation – in the Wright movie canon and/or Roseland (1977), a little-remembered entry in James Ivory’s canon. But rest assured that Mrs. Miniver will be on once again… (See TCM’s Teresa Wright movie schedule further below.)

In case you’re awake in the early hours of the morning, I’d suggest checking out:

‘The Little Foxe’s and ‘The Pride of the Yankees’

In the evening, TCM is showing two of Teresa Wright’s biggest hits: William Wyler’s The Little Foxes and Sam Wood’s The Pride of the Yankees.

The former, an adaptation of Lillian Hellman’s play about greed and corruption in the American South of the early 20th century, is one of the greatest films of the ’40s, showcasing Bette Davis at her very best. In fact, The Little Foxes’ cast, including Wright as Davis’ deceptively demure daughter, is uniformly excellent.

The latter film is an immensely successful – and highly sentimental – biopic about baseball player Lou Gehrig, who succumbed to amyotrophic lateral sclerosis at age 37 in 1941. Gary Cooper, who reportedly knew nothing about baseball, plays Gehrig. Wright is his wife. 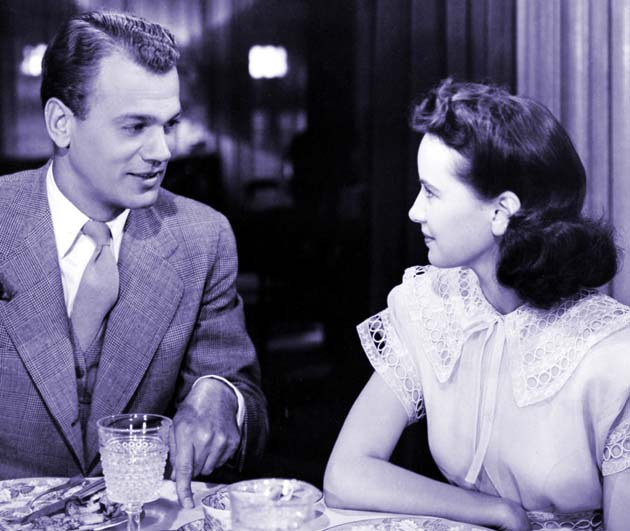 Teresa Wright in ‘Shadow of a Doubt’ with Joseph Cotten.

‘Shadow of a Doubt’

Set in a small, all-American California town, Shadow of a Doubt is supposed to be Alfred Hitchcock’s favorite among his films. Much like her character in The Little Foxes and The Pride of the Yankees, Teresa Wright plays an all-American girl (named Charlie) who, propelled by disillusionment, gets to display unsuspected resilience, determination, and fearlessness that had been lying hidden under a façade of gee-whiz sweetness and light.

Joseph Cotten, for his part, is Wright’s visiting, big city Uncle Charlie, who just happens to be an all-American sociopathic murderer.

One of the Shadow of a Doubt screenwriters was none other than Thornton Wilder – the same man responsible for Our Town. (Sam Wood’s bowdlerized, sentimentalized version starring William Holden and Martha Scott had been nominated for the 1940 Best Picture Oscar.)

‘The Happy Ending’ and ‘Count the Hours’

The Happy Ending (1969), with Richard Brooks directing wife Jean Simmons, is a waste of just about everybody’s talent – even though Simmons somehow managed to get a Best Actress Oscar nomination. (She lost to Maggie Smith for Ronald Neame’s The Prime of Miss Jean Brodie.)

Jean Simmons, who capably handled more complex roles elsewhere, plays a middle-aged woman who, stuck in an unfulfilling marriage, goes looking for a bit of self-realization. Moralizing dialogue and cliched characterizations ensue. Once again cast as Simmons’ Mom, Wright is misused in what amounts to a non-role.

Directed by Don Siegel (Invasion of the Body Snatchers, the Clint Eastwood thriller Dirty Harry), Count the Hours (1953) sounds more intriguing. A socially conscious crime drama, the film revolves around a migrant farm worker (John Craven) accused of murder. Wright is his wife, who convinces defense attorney Macdonald Carey (a fellow Shadow of a Doubt player) to look for the real culprit.

For the record, Teresa Wright’s Oscar nominations were for the following:

I should also note that Teresa Wright remained the youngest three-time Oscar nominee until Jennifer Lawrence was shortlisted for David O. Russell’s American Hustle in early 2014.

Teresa Wright in ‘The Best Years of Our Lives’ with Dana Andrews.

Bill B., I only see “winner” — referring to Teresa Wright — next to “Mrs. Miniver.” In the first paragraph, it says that she was “shortlisted” (nominated) for three Oscars. And there’s a segment further below listing each Wright nomination and the eventual winners (Garson, Astor, and Wright herself).

I had never seen “The Steel Trap” before, and enjoyed it on TCM, kind of, with some mildly entertaining suspense sequences. But yet again, another waste of TW’s talents, who played “the wife,” and that’s about it for her role. Saw her once, on stage in NY, and her wonderfully, precisely nuanced speaking voice was still intact.

There’s an obvious misprint here as Wright did not win three Oscars. I believe the word nominee was inadvertently substituted by the word winner.