Looney Tunes collaborators Tex Avery and Michael Maltese will be honored in a double centennial tribute by the Academy of Motion Picture Arts and Sciences on Monday, March 24, at 7:30 p.m. at the Linwood Dunn Theater at the Academy’s Pickford Center for Motion Picture Study in Hollywood.

“Putting Looney in the Toons” will showcase several short cartoons on which Avery and Maltese worked together as well as samples from their individual careers in animated theatrical films. The screenings will be complemented by audio presentations of rare recorded interviews with both Avery and Maltese discussing their careers with film historian Joe Adamson. And finally, the evening will feature a panel discussion with Brenda Maltese Moulthrop, daughter of Michael Maltese, and several of Avery and Maltese’s collaborators, including Martha Sigall, Jerry Eisenberg, and Don Jurwich. 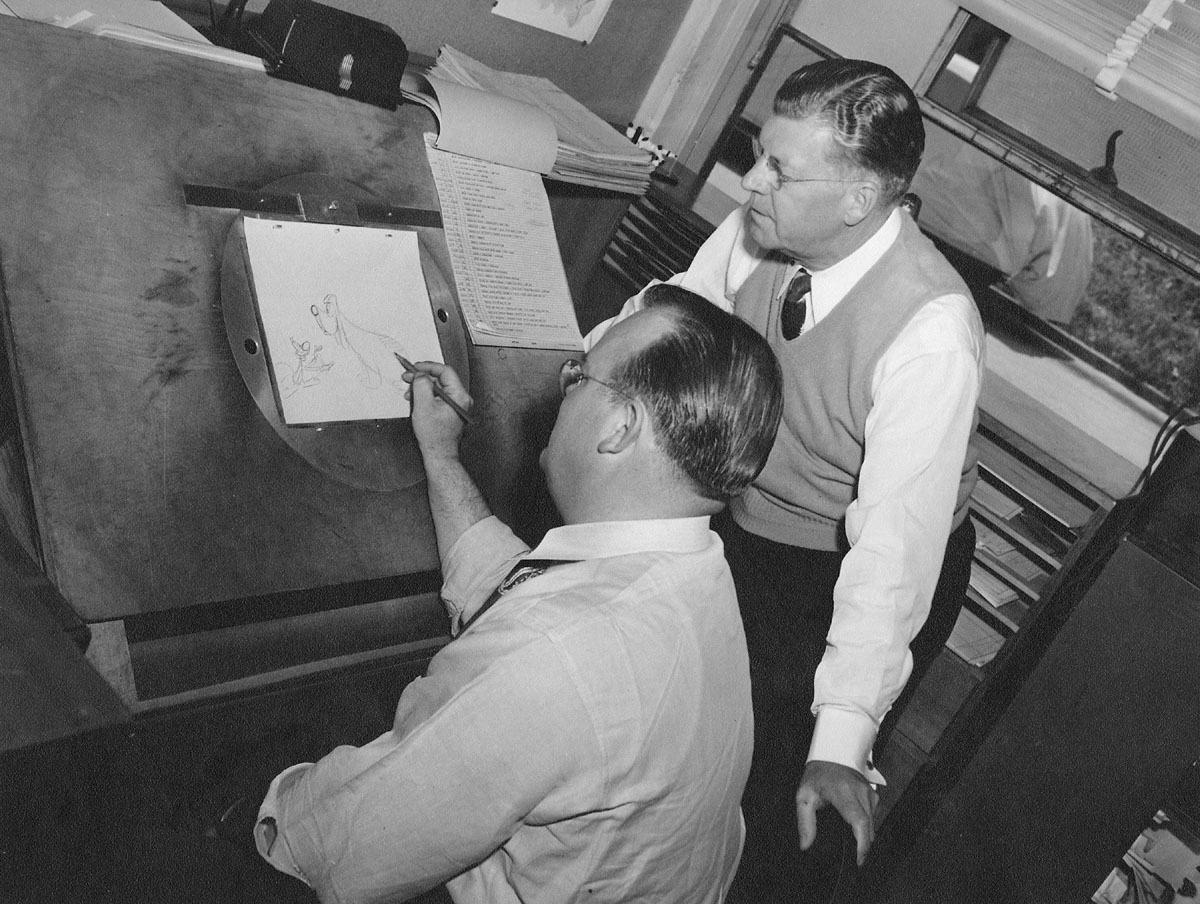 As per the Academy’s press release, “Avery and Maltese, both born in 1908, crossed professional paths at the Warner Bros. animation studio back when it was Leon Schlesinger Productions. Avery [above, drawing while producer Fred Quimby looks on] began his career at Walter Lantz’s Universal cartoon studio, working on Oswald the Lucky Rabbit. In 1935 he moved to Warner Bros., where he would create Daffy Duck and crystallize the personality of Bugs Bunny. From 1941 to 1954 Avery directed cartoons for MGM, introducing audiences to Screwy Squirrel, Droopy Dog and a whole new style of animated humor. In 1954 he initiated his final theatrical cartoons for Walter Lantz, including several Chilly Willy classics.”

Also at MGM, Avery created George and Junior, reportedly based on characters found in John Steinbeck’s Of Mice and Men. His first short at the studio, the Fred Quimby-produced Adolf Hitler parody The Blitz Wolf (1942), was shortlisted for that year’s Academy Award in the Short Subject, Cartoons category. 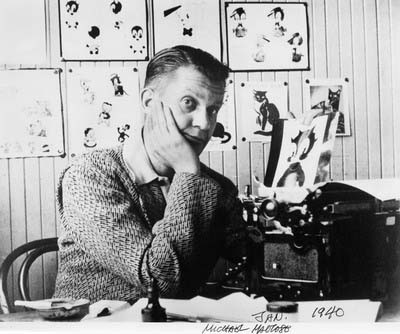 More from the Academy’s press release: “Maltese [above] began at Warner Bros. in 1937 and actually appeared on camera as a studio guard in You Ought to Be in Pictures, a 1940 Porky Pig short. After working with Avery and many other Warner Bros. directors, Maltese would go on to collaborate primarily with Chuck Jones, writing and storyboarding some of the most memorable Warner Bros. cartoons ever made, including What’s Opera Doc?, Duck Dodgers in the 24½th Century and One Froggy Evening.” 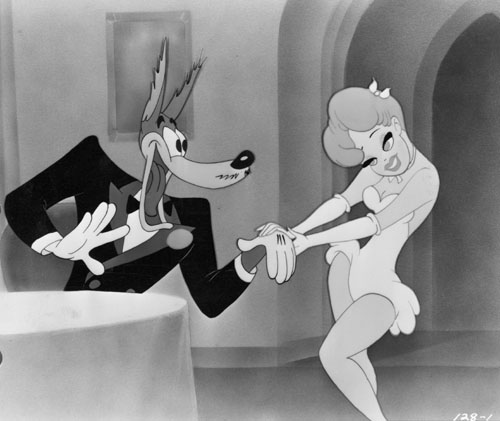 Tickets to “Putting Looney in the Toons: A Double Centennial Tribute to Tex Avery and Michael Maltese” are $5 for the general public and $3 for Academy members and students with a valid ID. They may be purchased by mail or at the Academy box office during regular business hours. Tickets also may be purchased online at www.oscars.org/events until noon PDT on the day of the event. There are no minimum order requirements and no transaction or processing fees.

Doors open at 6:30 p.m. All seating is unreserved. The Linwood Dunn Theater is located at 1313 Vine Street in Hollywood. Free parking is available through the entrance on Homewood Avenue. For more information, call (310) 247-3600. 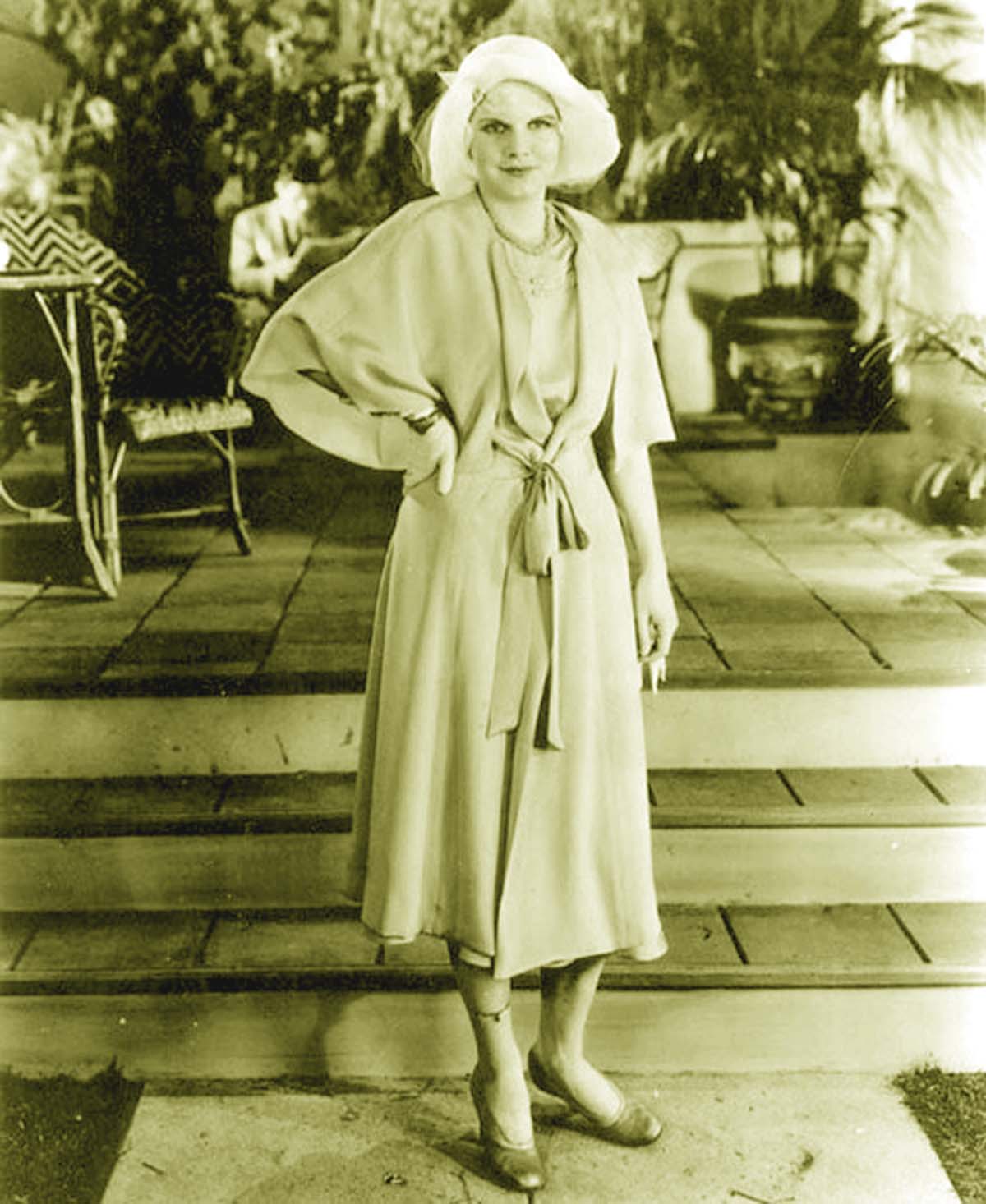 Dennis Lee Cleven is currently doing research on Jean Harlow, the MGM star who died at the age of 26 in 1937. Harlow reportedly appeared in about a dozen movies before her big break in Howard Hughes’ Hell’s Angels in 1929. Cleven is trying to find out the movie from which the above picture was taken.

He believes it could be one of three films:

If you know the answer to this query, please contact Alt Film Guide’s editor.

Among the best-known Jean Harlow movies of the 1930s are William A. Wellman’s The Public Enemy (1931), starring James Cagney, and with Harlow in a supporting role; Frank Capra’s Platinum Blonde (1931), with Robert Williams and Loretta Young; Jack Conway’s Red-Headed Woman (1932), with Chester Morris; Victor Fleming’s Red Dust (1932), with Clark Gable and Mary Astor, and Bombshell (1933), with Harlow as a Clara Bow-like Hollywood star, and co-starring Warner Bros. player Pat O’Brien.

Jean Harlow died during the filming of Saratoga (1937), which turned out to be her last movie appearance. A double was used for long-distance and certain carefully filmed “closer” shots. 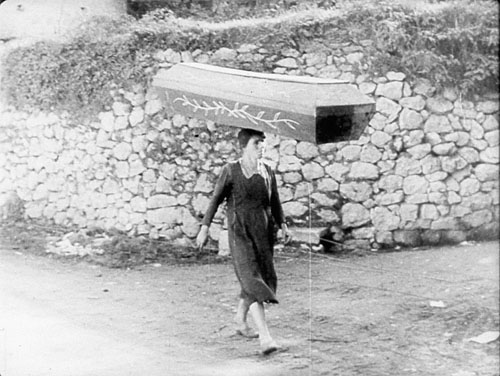 The Academy of Motion Picture Arts and Sciences’ John Huston Lecture on Documentary Film will acknowledge John Huston himself with a special screening of his controversial World War II documentary classics San Pietro (a.k.a. The Battle of San Pietro) (above, 1944) and Let There Be Light (1946), on Tuesday, April 15, at 7:30 p.m. at the Linwood Dunn Theater in Hollywood. Tony Huston, John’s son, will introduce the films.

As per the Academy’s press release, “these documentaries’ historical significance and current relevance will be among the topics covered in a post-screening panel discussion with Dr. Charles Wolfe, professor of film and media studies, UC Santa Barbara; Dr. Betsy McLane, documentary historian and author; and Richard E. Robbins, producer-director of Operation Homecoming: Writing the Wartime Experience, which was a 2007 Oscar nominee for Documentary Feature.”

The release adds that John Huston began shooting documentaries as a member of the U.S. Army Signal Corps in 1942. His first assignment was to record combat conditions on Adak Island, which led to the “straightforward and uncontroversial” Report from the Aleutians.

San Pietro was produced and directed by Huston for the U.S. War Department. But the problem was that it was deemed too violent and realistic – in other words, too anti-war. Not a good thing. San Pietro was held from release until 1945, when General George Marshall’s endorsement led to the removal of its “classified” status. (Even so, San Pietro suffered severe cuts before reaching U.S. screens.) The print screened at the Academy will be the complete original version. 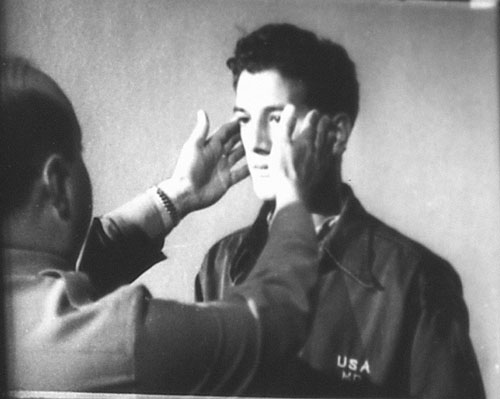 The War Department also banned Let There Be Light (above), “a naked portrait of the psychological problems suffered by returning veterans,” with voice-over narration provided by Walter Huston (John’s father). The ban was finally lifted in December 1980, and the film was released the following year. At that time, the New York Times’ Vincent Canby called it “a good, slickly made documentary,” though he failed to see what the Army’s fuss was all about. (Richard Corliss’ more passionate Time review can be found here.)

Tickets to the Academy’s John Huston Lecture on Documentary Film may be purchased online at oscars.org, in person at the Academy box office or by mail. Doors open at 6:30 p.m. All seating is unreserved. The Linwood Dunn Theater is located at 1313 Vine Street in Hollywood. For more information, call (310) 247-3600.

April 18: The photos below are from the Academy of Motion Picture Arts and Sciences’ April 15 John Huston Lecture on Documentary Film, which presented a special screening of two controversial World War II documentaries directed by John Huston, San Pietro and Let There Be Light. The event was held at the Linwood Dunn Theater in Hollywood. 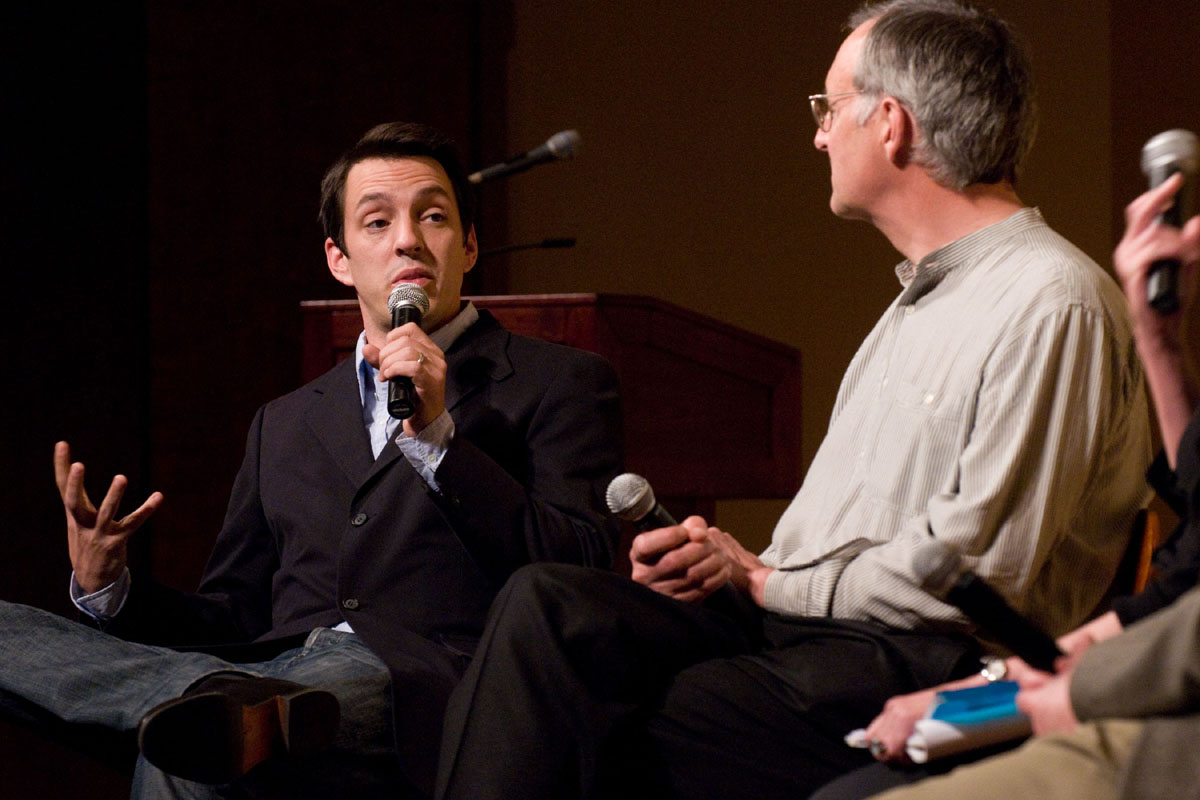 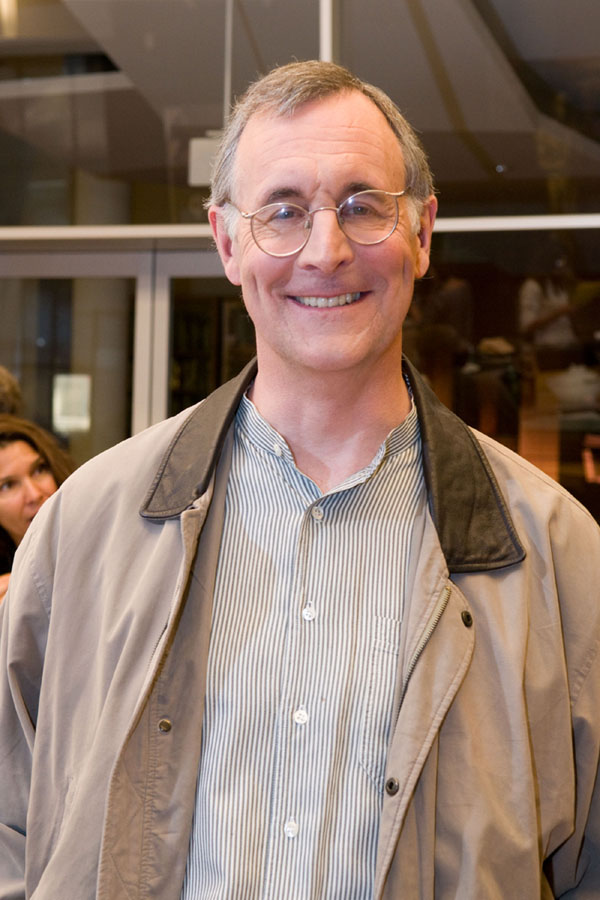 In April, the Writers Guild Foundation will salute David Chase, creator of the The Sopranos, and Budd Schulberg, Academy Award and WGA Award winner for On the Waterfront, and the son of Paramount honcho B.P. Schulberg.

The On the Waterfront screening will also feature a q&a with Schulberg, who will turning 94 this Thursday, March 27.

What Makes Sammy Run?, which in large part revolves around the formation of the Writers Guild, is one of the best if not the best Hollywood novel ever written. I find it hard to picture the young Budd Schulberg (he was in his 20s when he wrote Sammy), with his pro-union, left-leaning sensibilities developing into a “friendly witness” by naming alleged Communist sympathizers for the House Un-American Activities Committee during the Red Scare of the late 1940s and 1950s. But that’s what happened.

(More on Schulberg on this Darmouth University page.)

The information below is from the WGA press release. (Note: Schulberg won his Oscar for On the Waterfront; A Face in the Crowd received no Academy Award nominations.)

A rare public appearance by the man behind the ground-breaking show. Hear David Chase, award-winning creator of The Sopranos (and veteran of such shows as Northern Exposure, The Rockford Files, Almost Grown, and Ill Fly Away) in his first Los Angeles appearance since the shows much-talked-about final episode, discuss his career and craft, as well as the creation and making of the multi-season HBO hit that changed the face of television. Moderator to be announced.

AN EVENING WITH BUDD SCHULBERG
Screening of On the Waterfront (1954) and Q & A with Schulberg
Thursday April 24th, 7:00 pm

A unique opportunity to hear from living legend Budd Schulberg, the Oscar-winning screenwriter of On the Waterfront and A Face in the Crowd, and author of the classic show business novel-cum-expose, What Makes Sammy Run? Watch a screening of On the Waterfront (which won 8 Oscars in the Academy Awards for 1954) and listen to Schulberg share insights and anecdotes from his more than seven-decade career one that saw him writing for both the big and small screens and working with the leading directors and biggest stars in Hollywood. Moderator is F.X. Feeney.

Wine and dessert reception to follow both events. Both events held at the Writers Guild Theater at 135 S. Doheny Drive, Beverly Hills, CA 90211.

The Writers Guild Foundation is a non-profit corporation whose mission is to preserve and promote the work of writers for film and television.

Ed,
Thanks for writing. In the text, it does say that Quimby is the man standing next to Avery.

Well, Charles I don’t think the looney tunes are silly, even to this day. In fact I love them! Bugs is my favorite character, but I love all of them too! I am only 14 and I reinstate this, I LOVE THE LOONEY TUNES AND THEY WILL NEVER GO OUT OF STYLE/BE SILLY/OR STUPID!! ;) :) ;P

Congratulations to them. They are just awesome with those arts and ideas that truly started the revolution of cartoons.