Thanksgiving Families: Some Much More Popular Than Others

Zac Gille 11 years ago
The Muppets with Amy Adams. One would think that James Bobin’s The Muppets is the sort of ideal flick to come out during the Thanksgiving and Christmas seasons. Yet the “family movie” that has become one of the year’s biggest blockbusters – not only in the U.S. but also internationally – deals not with furry puppets, but with themes such as the consequences of interspecies breeding, the horrors of impending motherhood, and the life-saving possibility of abortion (that’s Breaking Dawn – Part 1). In fact, notwithstanding a number of good reviews and the presence of Amy Adams, the $45 million The Muppets has been an undeniable box office letdown.
Contents hide
1. Thanksgiving families at the movies: Unorthodox kinfolk easily beat more conventional types
1.1. Amy Adams’ ‘The Muppets’ trailing ‘Enchanted’
1.2. ‘The Muppets’ international prospects + slow-moving Happy Feet Two
1.3. ‘Arthur Christmas’ disappoints despite stellar voice cast
1.4. Costly ‘Hugo’ has no chance of recovering budget at domestic box office
1.5. ‘Jack and Jill’ one of Adam Sandler’s weakest performers + ‘Immortals’ dying slow death
1.6. Solid ‘The Descendants’ + ‘Tower Heist’ is a dud
1.7. Director Clint Eastwood’s domestic box office: ‘J. Edgar’ vs. ‘Milk’ & ‘Invictus’
1.8. ‘My Week with Marilyn’ just okay – but ahead of ‘Blue Valentine’
1.9. The Artist has strong debut – but trailing The King’s Speech
1.10. Psychological drama

(See previous post: “‘Tis the Season for Interspecies Breeding – But Breaking Dawn – Part 1 Trailing Previous Twilight Sequels.”) Nov. 29 update: In the United States, Thanksgiving is a time for families to gather, whether pigging out at the dinner table or watching movies on the big and/or small screen.

That may help to explain why movies espousing family values continue to dominate the North American box office this 2011 Thanksgiving Weekend. On big (and not-so-big) screens across the U.S., you’ll find family Christmases and families of movie lovers, in addition to penguin families, Muppet families, Hollywood families, and vampire families.

For starters, Bill Condon’s The Twilight Saga: Breaking Dawn – Part 1, starring a pregnant Kristen Stewart, an impregnating Robert Pattinson, and a madly jealous Taylor Lautner, added $41.7 million – down a whopping 70 percent – over the post-Thanksgiving Day weekend, Nov. 25–27, according to figures found at boxofficemojo.com. Its cume stands at $220.8 million.

Amy Adams, by the way, was also the star of Disney’s global box office hit Enchanted, which opened the week of Thanksgiving 2007. For comparison’s sake: The Muppets’ cume after five days is $41.5 million; four years ago, Enchanted took in $49.1 million (approximately $57 million today) during the same time frame.

The Muppets’ international prospects outside English-language countries such as the United Kingdom (where the TV show actually originated in the 1970s) and Australia are at best iffy. Disney suits can’t be too happy about their film’s domestic performance.

Meanwhile, George Miller’s Happy Feet Two continued its modest run, bringing in a mild $13.39 million at no. 3 on Thanksgiving Weekend. The Warner Bros.-distributed animated movie’s cume stands at $43.75 million. For comparison’s sake: back in 2006, Happy Feet collected $99.5 million (not adjusted for inflation) during the same period.

Unless the international market comes to the rescue – the film has performed moderately well in the U.K. and Germany – there’s no chance Sony will be able to recover its hefty $100 million investment at the box office. 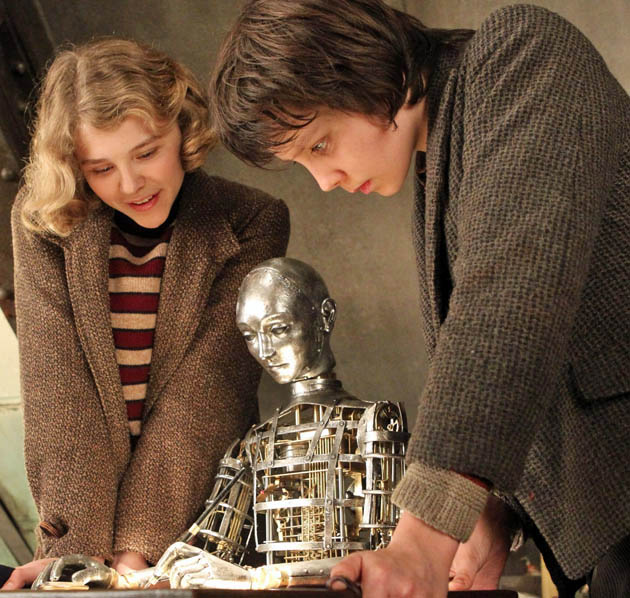 Hugo with Asa Butterfield and Chloë Grace Moretz. Martin Scorsese’s costly (“less than $150 million”) fantasy centered on the development of cinema as an art form has been a major box office disappointment whose only – however small – hopes are the international market and some strong Oscar love. Asa Butterfield and Chloë Grace Moretz are featured alongside Sacha Baron Cohen, Richard Griffiths, Christopher Lee, and Jude Law. John Logan (Gladiator, The Aviator) wrote the screenplay based on Brian Selznick’s novel The Invention of Hugo Cabret.

At no. 5, Martin Scorsese’s 3D adventure-fantasy drama Hugo brought in $11.36 million from 1,277 locations on Thanksgiving Weekend, averaging a solid – though hardly record-breaking – $8,899 per-theater average. Hugo‘s revenues and average were boosted by 3D surcharges, as about 75 percent of the film’s take originated from 3D venues.

As per producer Graham King, Hugo cost “less than $150 million.” Unless that means way less – preferably way less than $50 million – Scorsese’s latest has no chance of recovering its budget at the North American box office. Not even close.

Its total after about four-and-a-half days: $15.4 million. And in spite of its generally well-regarded use of 3D technology, international box office prospects don’t look all that rosy either, as Hugo lacks stars (such as Scorsese’s 21st-century muse, Leonardo DiCaprio), superheroes, and a numeral at the end of its title.

Among the English-proficient French (and non-French) characters inhabiting Hugo‘s universe are the following:

Veteran Christopher Lee (The Wicker Man, The Lord of the Rings: The Fellowship of the Ring). 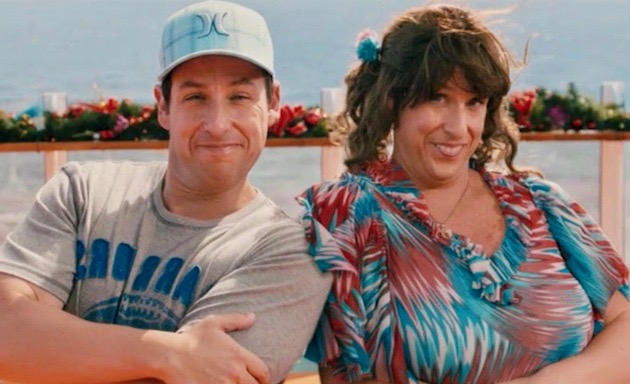 Jack and Jill with Adam Sandler times twice. Directed by Dennis Dugan, the lowbrow comedy Jack and Jill stars Adam Sandler as both a Los Angeles-based advertising executive and his “working-class” sister, who, as fate would have it, have to spend Thanksgiving together because, after all, they’re “family.” Also in the cast of this widely lambasted comedy: Katie Holmes and Al Pacino. Steve Koren and Adam Sandler himself were credited for the screenplay, from a “story” by Ben Zook.

From no. 6 to no. 8 on this past Thanksgiving Weekend’s box office chart were:

Of the aforementioned three movies, only Puss in Boots has managed to surpass its ($130 million) budget at the domestic box office. But remember, studios get only about 50–55 percent of a film’s domestic gross while production budgets don’t include marketing & distribution expenses.

In other words, Puss in Boots is a domestic box office letdown – on the bright side, one with a likely robust international life thanks to its Shrek association. The $80 million Jack and Jill is a downright domestic flop and so is the $75 million Immortals, though the latter has already grossed about $65 million overseas.

Solid ‘The Descendants’ + ‘Tower Heist’ is a dud

At no. 9, Alexander Payne’s critical hit The Descendants, starring George Clooney and Shailene Woodley, brought in $7.34 million ($10.88 million cume). The likely Best Picture Academy Award contender added more than 400 locations this past Thanksgiving Weekend; its per-theater average at 433 sites was an excellent $16,628 – and without the help of 3D surcharges.

For comparison’s sake: The Descendants’ average was more than twice that of My Week with Marilyn‘s $7,174 at 244 locations. Also, in late December 2009 the George Clooney-Jason Reitman well-received collaboration Up in the Air averaged $18,344 at 175 locations; Up in the Air went on to gross $83 million domestically. (All things being equal, the fewer the number of locations, the higher the per-theater average should be.) 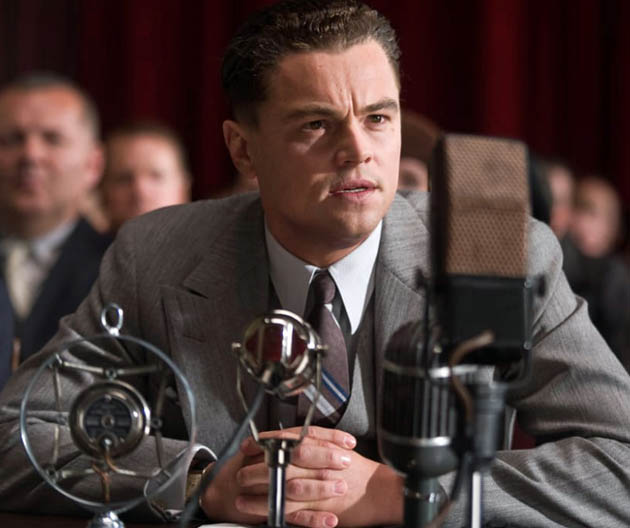 J. Edgar with Leonardo DiCaprio. J. Edgar Hoover was one of the most notorious and controversial U.S. figures of the 20th century. Besides using the FBI as his own private fiefdom, Hoover may or may not have been intimately involved with his associate director, Clyde Tolson. In J. Edgar, director Clint Eastwood and screenwriter Dustin Lance Black provide a – tepidly received – portrayal of the man who, according to the film, didn’t want to dance with Ginger Rogers, claimed he wanted to marry Dorothy Lamour, and attempted to blackmail Martin Luther King Jr. Leonardo DiCaprio stars as Hoover while Armie Hammer was cast as Tolson.

J. Edgar is clearly running ahead, though it’s debatable whether it’ll manage to pass the $50 million mark in the U.S. and Canada – especially if it fails to get much awards season assistance. Overseas prospects are brighter merely because of the presence of Leonardo DiCaprio.

‘My Week with Marilyn’ just okay – but ahead of ‘Blue Valentine’

For comparison’s sake: last January, Derek Cianfrance’s Blue Valentine, starring Williams and Ryan Gosling, averaged $6,029 per site after expanding from 40 to 230 locations on its second weekend out. (Note: Blue Valentine had the advantage of higher earnings on a Sunday before a “partial” national holiday, Martin Luther King Day.)

The Weinstein Company released both My Week with Marilyn and Blue Valentine, which went on to gross only $9.7 million domestically despite Williams’ eventual Best Actress Oscar nod.

In addition to Michelle Williams as Marilyn Monroe, My Week with Marilyn, which is set during the making of The Prince and the Showgirl, features:

Eddie Redmayne as author/filmmaker Colin Clark, the titular “My.”

The Artist has strong debut – but trailing The King’s Speech

Another The Weinstein Company Thanksgiving release, Michel Hazanavicius’ widely acclaimed The Artist opened with a strong $204,878 at 4 locations, averaging $51,220 per site.

Thanks to awards season momentum, The King’s Speech went on to gross $135.45 million in North America.

In The Artist – which mixes elements from, among others, What Price Hollywood?, A Star Is Born, and Rin Tin Tin movies – Cannes Film Festival Best Actor winner Jean Dujardin stars as a fast-fading silent film actor whose romantic interest, Hazanavicius’ real-life wife Bérénice Bejo, is a fast-rising star.

And finally, distributed by Sony Pictures Classics, David Cronenberg’s A Dangerous Method opened with $167,953 at four theaters on Thanksgiving Weekend, averaging $41,988 per site.

Michael Fassbender as Carl Jung, Keira Knightley as Sabina Spielrein, and Viggo Mortensen as Sigmund Freud are seen in this – quite literally – psychological drama.

“Thanksgiving Families for All Tastes: Some Much More Popular Than Others” last updated in July 2018.