The Beast with a Million Eyes: Roger Corman Beats Alfred Hitchcock with Nature vs. Humans Thriller 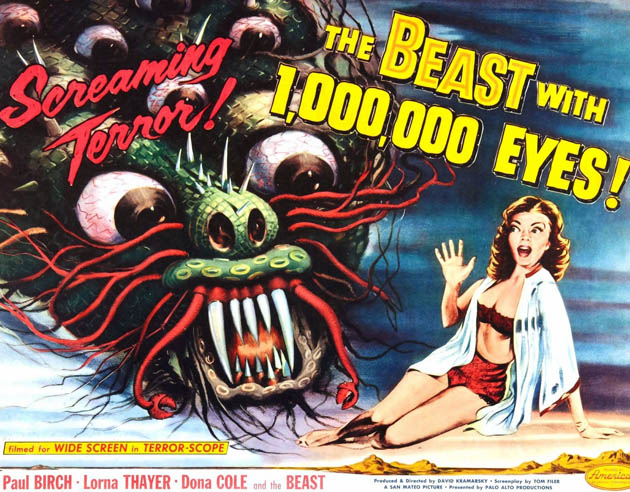 Despite the confusing voice-over introduction, David Kramarsky’s[1] The Beast with a Million Eyes a.k.a. The Beast with 1,000,000 Eyes is one of my favorite 1950s alien invasion films.

Set in an ugly, desolate landscape – shot “for wide screen in terror-scope” in Indio and California’s Coachella Valley – the screenplay by future novelist Tom Filer (who also played Jack Nicholson’s sidekick in the 1966 Western Ride in the Whirlwind) focuses on a dysfunctional family whose members become the first victims of a strange force from another galaxy after a spaceship lands nearby emitting sound vibrations that turn domestic animals into aggressive killers.

First, the lady-of-the-house is pecked by a flock of chickens and, scariest of all, by the family dog. Then the teenage daughter is practically stampeded by a (single) bull.

If that weren’t all, the whole family is threatened by wild birds (eight years before Alfred Hitchcock)[2], while silent film comedian Chester Conklin becomes the victim of his rampaging dairy cow.

Adding to all this other-worldly drama is the strange, mute farmhand (Leonard Tarver) who spends much of his time drooling over his pinup-girl photo collection, and acting rather sinisterly. He is only known as “Him.”

Overall, the characters are particularly dim-witted, failing to realize what danger they’re in until it’s too late. For instance, despite all the warnings, they still trust the lunatic farmhand even though he is obviously under the influence of the alien force.

A family that is ‘strong-minded’ together…

As a result, all these beasts – together with their million eyes – get even with the human race after centuries of abuse. That’s how I see it anyway.

Tom Filer, however, apparently had a different message to convey: the alien creature takes over the animals and the weak-minded in order to control strong-minded people. (Or something like that.) But as far as the human mind is concerned there is safety in numbers, and that proves stronger than the power of the alien.

I’m sure there’s something of moral importance in there somewhere, but I’d rather see The Beast with a Million Eyes as “vegetarian propaganda.” And as a warning against animal exploitation.

Roger Corman on the set of Bloody Mama: Future Honorary Oscar recipient was involved in the production of dozens of (cult) B movies, including The Beast with a Million Eyes.

According to several online sources, production manager/assistant director Lou Place (Teenage Doll, the TV series The Fugitive) co-directed The Beast with a Million Eyes. Wikipedia, citing Mark McGee’s Faster and Furiouser: The Revised and Fattened Fable of American International Pictures, states that Place was the assigned director, getting replaced by Roger Corman – at least temporarily – shortly after filming began.

Corman received no directorial credit, which went instead to his Five Guns West assistant, David Kramarsky.

† The Unseen is the title of a 1945 Paramount thriller directed by Lewis Allen, and starring Joel McCrea, Gail Russell, Herbert Marshall, and Phyllis Brooks.

[2] Directed by Alfred Hitchcock from a screenplay by Evan Hunter loosely based on Daphne Du Maurier’s 1952 story, The Birds was released in 1963. In the cast:

‘The Beast with a Million Eyes’ future two-time Oscar winner

Notably, the art director on The Beast with a Million Eyes was Albert S. Ruddy, later the Oscar-winning producer of Francis Ford Coppola’s The Godfather (1972) and (one of the producers of) Clint Eastwood’s Million Dollar Baby (2004).

The film’s uncredited cinematographer was future Roger Corman collaborator Floyd Crosby, whose movie credits – however sporadic pre-1940 – dated back to F.W. Murnau’s Tabu: A Story of the South Seas (1931).

On screen, The Beast with a Million Eyes cinematography credit went to Everett Baker; according to Randy Palmer’s Paul Blaisdell, Monster Maker: A Biography of the B Movie Makeup and Special Effects Artist, Baker was a UCLA cinema department professor.

The Beast with a Million Eyes cast info via the IMDb.

The Beast with a Million Eyes poster: American International Pictures.

Image of Roger Corman on the Bloody Mama set via Wired.com.

The Other Side of the Street: Brazilian Hitchcock-Antonioni Mix