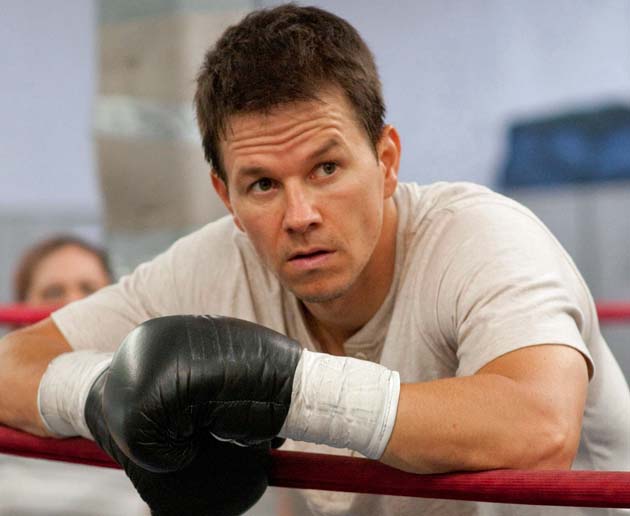 David O. Russell’s The Fighter is a smart film; smart in the way it’s constructed and executed as a means to appeal to a wide audience. People tend to like sports movies. They also tend to like movies where the good guys win and where the hardships the characters go through can all get tidily worked out by the time the end credits start rolling. The Fighter is smart from a business standpoint.

That also means Scott Silver, Paul Tamasy, and Eric Johnson’s screenplay is predictable and much too “safe” as well. Russell and the screenwriters don’t tread any new territory; in fact, they don’t even try. On the positive side, The Fighter offers several solid performances that make up for some of what’s lacking elsewhere.

Inspired by a true story, the film follows Micky Ward (Mark Wahlberg), a boxer wannabe who has lived in the shadow of his older half-brother and former fighter Dicky Eklund (Christian Bale). Dicky, for his part, is the pride of the town, having at one point “knocked down Sugar Ray Leonard.” But now Dicky has been reduced to the role of Micky’s trainer – just a has-been addicted to crack.

Micky hasn’t won a fight yet, but he knows he can if he just gets that one shot. His mother, Alice (Melissa Leo), is his manager, though she seems more preoccupied with the idea of being his manager than actually leading him to the big time. In other words, Micky’s family is keeping him down. But then, Charlene (Amy Adams) comes into his life, giving Micky the chance to turn things around.

It’s all pretty run-of-the-mill stuff; as a result, it’s not at all difficult to see where the story is going about ten minutes into the movie. But as I mentioned above, The Fighter stands out because of some effective performances, especially those of Melissa Leo and Christian Bale, who both seem poised to get noticed by Oscar.

All done up with a ridiculously huge head of blond hair and a cigarette always in her hand, Melissa Leo is a woman caught in the struggle between her two sons – which gets in the way of her properly loving or caring for either of them. Leo fully delivers, hitting all the right notes and finding humanity in a character that could have easily come across as a caricature.

Christian Bale shines as well … though not literally. He lost a ton of weight for the role – reminiscent of his work in the little-seen The Machinist – but his commitment shows beyond his emaciated physical appearance. Bale’s Dicky is a man so attached to his former glory – if there ever really was any – that he has cornered himself into a delusional hole. (Curiously, through much of the movie he’s followed by an HBO film crew doing a documentary on crack addiction.)

I should add that Mark Wahlberg and particularly Amy Adams also do well in their roles.

Effective within its ‘modest aims’

The family dynamics in The Fighter are its strongest elements, for the scenes tackling the characters’ dysfunctional relationships are by far the most effective. If he’s a drug abuser, Dicky can’t help Micky reach the big time – but then, does he really want his brother to succeed?

Within its modest aims, The Fighter is mostly effective. Yet the film fails where most other “inspirational sports dramas” do. That’s not to say that The Fighter doesn’t entertain; it’s simply that this boxing drama is neither special nor original. For my part, I appreciated what worked and ignored what didn’t.

I’d say that if you’re looking for a sports movie with the usual peaks and valleys, The Fighter is for you. True, David O. Russell doesn’t break any new ground, but it’s clear he is not trying to.