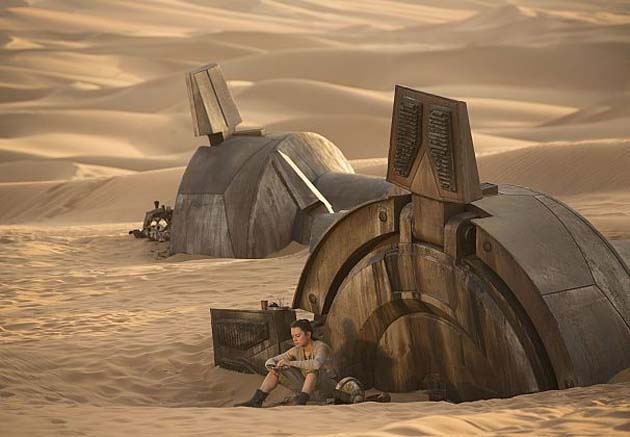 ‘Star Wars: The Force Awakens’: Negative reviews have been few, but pointed

Star Wars: The Force Awakens is currently enjoying a 91 percent approval rating among Rotten Tomatoes‘ top critics. The average rating of the latest movie in the George Lucas-founded Star Wars franchise is 8.3/10.

That’s quite a bit higher than the RT top critics’ rating for The Force Awakens’ three predecessors, all directed by Lucas – his first (and, to date, last) films since Star Wars back in 1977:

Like it or not, ‘the Force is with us forever’

Gushing The Force Awakens reviews have poured forth from both little-known online outlets and major publications. They’re everywhere. Of course, there have been a few less gushing ones as well, such as Anthony Lane’s The New Yorker review, which ends with:

Heretics and infidels, like myself, will be gratified to have avoided a more parlous fate. Please forgive us if we snort into our sodas when Han Solo remarks, “The Dark Side, the Jedi—it’s true. All of it.” Actually, Han, it’s not. It’s baloney. But it’s fun to behold, for now. And how long is it until the next chunk, a spin-off titled “Rogue One: A Star Wars Story,” crash-lands at a movie theatre near you? One year. The Force is with us forever, whether we like it or not.

Some may not be all that thrilled with the thought. Star Wars: The Force Awakens has been dismissed by several major online and print publications. Below is a sample of those whose voices have been drowned out by the multimillionaire hype and who may have wished that the force had lain dormant – or, instead, that it had been a little more alert.

“Sure, it’s still a fun ride – shootouts, getaways made via hyperspace, wisecracks. But pretending The Force Awakens is anything more than a glib facsimile of A New Hope, the original Star Wars movie, is delusional. It’s dull because it is achingly unoriginal. Abrams, at every turn, plays it safe, with multiple ‘takes me right out of the movie’ lapses.” Roger Moore at Movie Nation.

“The franchise that wrecked American cinema is back, with fanboy auteur J.J. Abrams (Star Trek, Mission: Impossible III) taking the reins from series creator George Lucas. … As with other installments, this is less a movie than an exercise in massaging a juvenile-minded audience that wants the experience to be new and familiar at the same time.” J.R. Jones in The Chicago Reader.

“To write the original Star Wars script, George Lucas studied up on world mythology, eventually creating a trilogy of movies that drew on Roman history, Christian myth, chivalric legend and Buddhist philosophy. To produce their sequel to that trilogy, the filmmakers hired by Disney simply studied Lucas.

“The much-anticipated Star Wars: The Force Awakens continually reprises plots and themes from the first three movies. It tells a well-crafted story; the new characters are invigorating; the old characters are reintroduced tidily. But it is also far too enamoured with the power of its own history. Apparently, anything that costs $4-billion – that’s the price Disney paid for Lucasfilm – must be mythic.” Kate Taylor in The Globe and Mail.

Simulacrum of a simulacrum

“Indeed, all the spoilers I could throw at you right now – but I won’t, I promise – would seem familiar, because the whole damn movie seems obsessively and insistently familiar. We have known for months or years that The Force Awakens would be a massive worldwide hit, and that would still be true even if it turned out to be about Jar Jar Binks and the Little Mermaid going on an underwater quest for the essence of Gangnam Style. It’s the Citibank of movies, literally too big to fail. But Abrams has grander ambitions than a Michael Bay-style cash grab. His mission is to build a new Star Wars franchise on top of the old one, and the ultimate success of that venture will largely depend on how the series’ millions of fans react to the fact that he hasn’t just made a movie fueled by nostalgia, or a movie full of mythic echoes. He’s made a movie they’ve already seen, a simulacrum of something that was already a simulacrum of something else.” Andrew O’Hehir at Salon.

Less than the sum of its parts

“And yet The Force Awakens adds up to something less than the sum of its parts. The early scenes have a relaxed, assured pace. But as the story moves forward, Abrams becomes more mired in the task of keeping the plot mechanics in gear. There’s the expected climactic battle between X-wing starfighters and TIE fighters, which is mildly exciting and nothing more—the fact that it’s punctuated with dumb dialogue like ‘General! Their shields are down!’ ‘Prepare to fire!’ and even the classic, ‘It would take a miracle to save us now,’ surely doesn’t help. And the movie’s big twist, clearly intended to be a moment of Shakespearean grandeur, is handled clumsily: Instead of allowing a significant figure to have his grand moment, Abrams cuts to other characters expressing shock and dismay, as if he didn’t trust the audience to know what to feel.” Stephanie Zacharek in Time.

‘Everything you could hope for … and less’

The title of her review reads: “The Force Awakens Is Everything You Could Hope for in a Star Wars Movie — and Less.”

“But the movie can’t sustain its playfulness—or its tension, either. Abrams is too busy trying to roll the original Star Wars and The Empire Strikes Back into one two-hour-and-15-minute movie. He combines the world building (and world destroying) of the first film, its Second World War–like aerial combat and anti-fascist derring-do, with the psychodynamics of the second one. … Without the careful buildup that Irvin Kershner gave the series-altering revelations in The Empire Strikes Back, the dramaturgy becomes stilted and the dialogue bland, not powerfully archetypal. Nothing can leech the zip from a performer quicker than an overblown lament for a child gone wrong. And nothing can stop a movie dead in its tracks like errant sentimentality. In The Wild Bunch, Pike Bishop [played by William Holden] had the sardonic wisdom to declare: ‘10,000 [dollars] cuts a lot of family ties.’ In Star Wars: The Force Awakens, you can kill 10,000 people and be welcomed back into your family as long as you’re sorry and you promise to change.” Michael Sragow in Film Comment.

Among the Star Wars: The Force Awakens cast members are:

Other performers in any one (or more) of the six previous movies of the Star Wars franchise include:

George Stevens Movies: Woman of the Year + The Talk of the Town

Thank you for typing all that so I didn’t have to. You hit the nail on the head.

This film was created for people who love the Star Wars story line; and those people like this movie because it advances it in a compelling way. I have been avid since the inception and I found this to be a GREAT movie.

If one hasn’t an appreciation for the story, I could see why they’d miss the point and write a bad review.

I disagree, most of the reviews point out how Abrams basically re-wrote the first movie.

I enjoyed the film, despite thinking Star Wars is inane compared to other sci-fi offerings, but it really was a rip off of the earlier material.

I’m surprised that isn’t annoying people more, they are instead gushing over this strange plot-less film.

I love going to the movies and watching explosions and this silly stuff, but I can normally spot a film that will get bad reviews but the way this one has been received has surprised me.

Do you know what I notice with the negative reviews highlighted here. They are either stating outright they do not like Star Wars in the first place (why are they reviewing a title for a franchise they have such bold bias against?).

Or they just state they do not like it because it is made by a “fanboy” JJ Abrams… Seriously? That is not how professional reviewing is done. You review a movie based on its content, acting, writing, cinematography, music and so on. A valid criticism could be that the actor chosen for Kylo Ren is weak (I don’t think so but someone could make such a valid argument).

An invalid argument is that the movie sucks because JJ Abrams “played it safe” without elaborating on how or why they think he played it safe and how JJ Abrams being a fanboy negatively affected the movie? Would you rather it be directed by someone who hates Star Wars?

These are definately not the droids you are looking for.