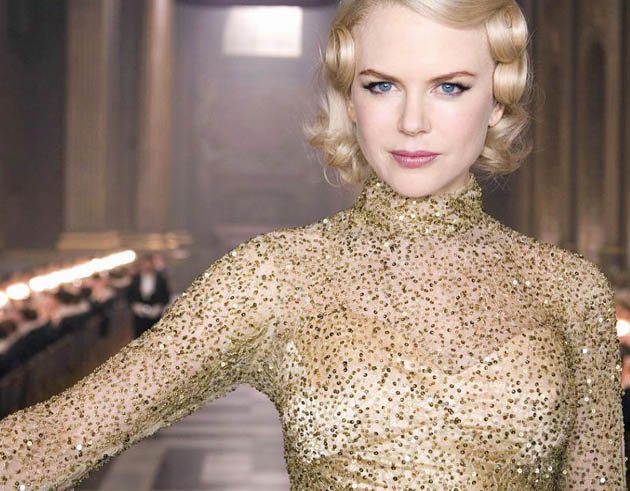 The Golden Compass with Nicole Kidman as the powerful and (most likely) untrustworthy Mrs. Coulter. Is Chris Weitz’s bowdlerized film version of Phillip Pullman’s Northern Lights anti-Catholic and/or anti-Christian? In fact, is the meandering fantasy film anti- or pro-anything? As for the sparklingly dressed Mrs. Coulter, is she a villainess? If so, how dangerous a villainess is she? The Denver Archbishop has definite opinions about Mrs. Coulter, calling her “wicked.”
Contents hide
1. U.S. Conference of Catholic Bishops removes positive The Golden Compass review
1.1. Denver archbishop takes issue
1.2. Too much Catholic ado about…?
1.3. Box office disappointment?
1.4. International hit, domestic dud
1.5. The Golden Compass cast
1.6. Moonstruck screening with Best Supporting Actress Oscar winner Olympia Dukakis
1.7. Oscar love
1.8. Original Moonstruck Oscar print

Days after Chris Weitz’s The Golden Compass – the 2007 film adaptation of (atheist) author Philip Pullman’s fantasy novel Northern Lights – opened in the United States to mixed reviews and underwhelming ticket sales, the U.S. Conference of Catholic Bishops withdrew its positive review of the film, which had been posted on the Catholic News Service website and published in diocesan newspapers.

Written by Harry Forbes and John Mulderig, the director and staff reviewer of the U.S. Conference of Catholic Bishops’ Office for Film and Broadcasting, the review described The Golden Compass as “an exciting adventure story with, at its core, a traditional struggle between good and evil, and a generalized rejection of authoritarianism.”

“For now,” the review stated, “this film – altered, as it is, from its source material – rates as intelligent and well-crafted entertainment.”

“The aggressively anti-religious, anti-Christian undercurrent in The Golden Compass is unmistakable and at times undisguised. The wicked Mrs. Coulter [Nicole Kidman] alludes approvingly to a fictional version of the doctrine of Original Sin. When a warrior Ice Bear – one of the heroes of the story – breaks into the local Magisterium headquarters to take back the armor stolen from him, the exterior walls of the evil building are covered with Eastern Christian icons. And for Catholics in our own world, of course, ‘Magisterium’ refers to the teaching authority of the Church – hardly a literary coincidence. The idea that any Christian film critics could overlook or downplay these negative elements, as some have seemed to do, is simply baffling.”

According to the National Catholic Reporter, “the conference gave no reason for its decision” to rescind the review.

Too much Catholic ado about…?

Adapted by Chris Weitz (American Pie, About a Boy), the “intelligent and well-crafted” The Golden Compass chronicles the travails of a little girl, Lyra (Dakota Blue Richards), while trying to accomplish something. But what?

What are the ideas at the core of Weitz’s slow-paced, magicless, $180 million-budgeted movie following the filmmakers’ radical bowdlerization of Pullman’s novel? Question authority? Be kind to animals? Might makes right? Merchandising is the supreme force of the universe?

Ultimately, whether or not one actually finds something meaningful about The Golden Compass is irrelevant when discussing the issue of censorship – which has been not only exercised but also condoned by some in the upper levels of the Catholic hierarchy.

Their message – and only theirs – is allowed to be heard by those who are incapable of making up their own minds about reality. Or, for that matter, about which movie to go see.

Dec. 19 update: In its review of The Golden Compass, the Vatican newspaper L’Osservatore Romano states that Chris Weitz’s fantasy film is evidence that “when man tries to eliminate God from his horizon, everything is reduced, made sad, cold and inhumane.”

Now, although much has been written about The Golden Compass’ highly disappointing domestic box office gross, Chris Weitz’s fantasy is performing remarkably well overseas, having earned more than $90 million in 12 days.

Of course, the fact that the U.S. dollar is currently worth little more than toilet paper surely helps. Also, domestic distributor New Line apparently won’t see much – or any – of that foreign revenue stream, as it has sold off the film’s foreign distribution rights.

The Golden Compass trailer with Dakota Blue Richards, Nicole Kidman, Daniel Craig, and Ice Bears. The Chris Weitz-directed fantasy adventure received – surprising – praise from a couple of U.S. Conference of Catholic Bishops’ Office for Film and Broadcasting reviewers before their commentary was removed from the Catholic News Service website. Some in the Catholic hierarchy have been deeply offended by The Golden Compass, based on Philip Pullman’s fantasy novel Northern Lights.

Update: The Golden Compass ended up collecting $302.12 million at the international box office, in addition to a – relatively speaking – puny $70.1 million in the U.S. and Canada, for a worldwide gross of $372.22 million.

Enough to cover its mammoth budget after exhibitors’ take their cut? Yes and no.

Yes, if only the production budget is included. No, once one adds the marketing and distribution expenses, which, as a rule of thumb (vis-à-vis production costs), would have hovered at about $90 million.

And that’s not taking into account the deals among the production companies, domestic distributor New Line, and the film’s international distributors.

Besides Dakota Blue Richards, The Golden Compass features the following:

And the voices of: 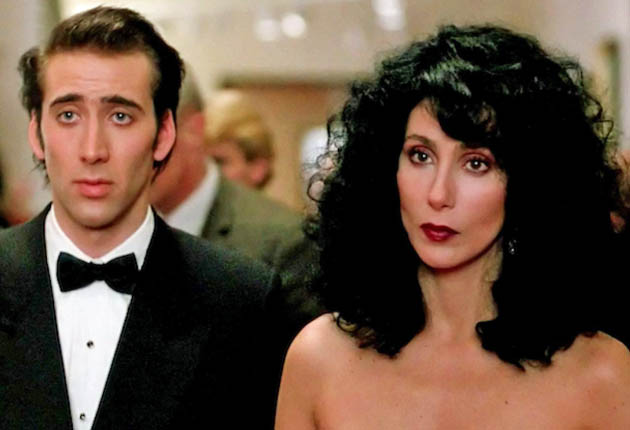 Moonstruck with Cher and Nicolas Cage. One of the decade’s highest-grossing movies at the domestic box office, Norman Jewison’s 1987 romantic comedy Moonstruck revolves around the odd pairing of a strong-willed, widowed Brooklyn Heights bookkeeper (Cher) and a dim-witted local baker (Nicolas Cage).

In other film news, Academy Award-winning actress Olympia Dukakis and Turner Classic Movies host Robert Osborne will take part in an onstage discussion following the 20th anniversary screening of the 1987 romantic comedy Moonstruck on Monday, Dec. 17, at 7:30 p.m. at the Academy Theater in New York City.

Directed by Norman Jewison (In the Heat of the Night, Fiddler on the Roof) from a screenplay by John Patrick Shanley, Moonstruck chronicles the unlikely romance blossoming between a widowed Brooklyn Heights bookkeeper (Cher) and a slow-witted local baker (Nicolas Cage).

Vincent Gardenia, Danny Aiello, John Mahoney, and Feodor Chaliapin Jr. round out the cast of this middling – and very popular with both audiences and critics – romantic comedy that, however briefly, turned Cher into a bona fide film star.

The upcoming Moonstruck screening is the latest installment in the Academy of Motion Picture Arts and Sciences’ “Monday Nights with Oscar” series. The original print submitted for the 60th Academy Awards will be shown.

Tickets for Moonstruck are $5 for the general public and $3 for Academy members and students with a valid ID. The Academy Theater is located at 111 East 59th Street in New York City. For more information, visit www.oscars.org.

This blog also has guidelines. For instance, bigotry is unacceptable. The Alternative Film Guide will not publish a review or commentary stating that X ethnic/religious/national/etc. group is inferior to Y group because of this or that holy book. Or simply because the author of the review has mental issues.

But if there’s a movie I find offensive – filled with bigotry – but a contributor sees it differently (“it’s not really pro-bigotry, it’s actually anti-violence”), I’d have no right (or desire) to prevent the author from publishing his/her take on said film.

The U.S. bishops could easily have added a note to the “Golden Compass” review stating that Forbes and Mulderig’s views were theirs alone, and that they did not reflect the bishops’ own views. That would have solved the problem – New Line wouldn’t be able to claim the bishops approved of their film – without the need to remove (i.e., censor) the “offensive” review.

No matter what the Office for Film and Broadcasting of the U.S. Conference of Catholic Bishops says, Catholic moviegoers (those who think for themselves, that is) will see “The Golden Compass” in their own way.

Regarding Forbes and Mulderig, this was not a case of censorship but rather of malfeasance.

As you noted, Harry Forbes and John Mulderig are “the director and staff reviewer of the Office for Film and Broadcasting of the U.S. Conference of Catholic Bishops.”

The bishops’ website describes that office as follows: “The Office for Film and Broadcasting is responsible for reviewing and rating theatrical motion pictures, previewing and evaluating television programming as well as providing the Catholic public with information about the role of the entertainment and news media in influencing societal and personal values.”

Catholics look to these reviews for guidance in making their entertainment choices for themselves and their families. As one would expect, once this review was published, news organizations ran stories saying the Catholic bishops liked the film, and the studio began planning a massive marketing campaign to Catholics.

If a film critic employed by a Quaker organization praised a shoot-em-up Schwarzenegger film or a PETA film critic praised a film in which animal torture is presented as fun, you would justly say that they aren’t doing their jobs, and you would expect their bosses to take appropriate action. If a public relations director of a large corporation misrepresents his corporation’s views or policies to the public, swift correction (and perhaps a firing) would follow.