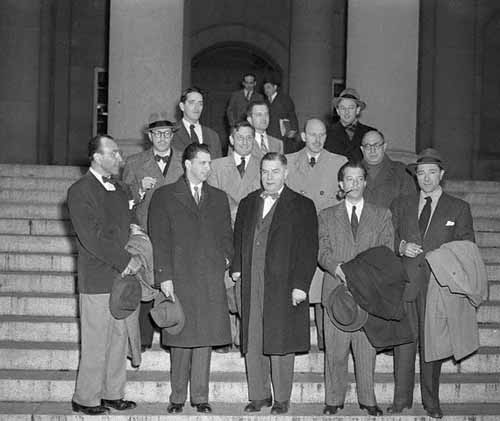 Ed Rampell, author of Progressive Hollywood: A People’s Film History of the United States, remembers the Hollywood Ten at Truthdig.

“Sixty years ago, as wicked witch-hunters descended upon the movie industry, Judy Garland took to the microphone for a coast-to-coast radio program called ‘Hollywood Fights Back!’ Instead of singing, the 25-year-old starlet asked Americans:

‘Have you been to a movie this week? Are you going to a movie tonight, or maybe tomorrow? Look around the room. Are there any newspapers lying on the floor? Any magazines on your table? Any books on your shelves? It’s always been your right to read or see anything you wanted to. But now it seems to be getting kind of complicated. For the past week, in Washington, the House Committee on Un-American Activities has been investigating the film industry. Now, I have never been a member of any political organization. But I’ve been following this investigation and I don’t like it. There are a lot of stars here to speak to you. We’re show business, yes. But we’re also American citizens. It’s one thing if someone says we’re not good actors; that hurts, but we can take that. It’s something else again to say we’re not good Americans! We resent that!'”

Okay, so Judy Garland wasn’t a “starlet” in 1947, but a major star. No matter, Rampell’s article is an excellent read.

Pictured is John Howard Lawson (Bachelor Apartment, Blockade, Algiers), one of the Hollywood Ten – screenwriters, producers, and directors who were cited for contempt of Congress after refusing to give testimony to the House Un-American Activities Committee. All of them served prison sentences of up to one year.

In the early 1950s, Edward Dmytryk switched sides. He became a “friendly witness” – naming his former collaborator Adrian Scott and director Jules Dassin – and had his name removed from the blacklist. Dmytryk resumed his career as a director. Scott’s career never recovered. Dassin fled for Europe, where he was to make He Who Must Die, Rififi, and Never on Sunday, among others.

Source for many of the names above: Wikipedia – hardly a reliable source, but they do list the literary sources for the names found on their Hollywood blacklist page.

More on the Hollywood Ten

Ida Lupino Movies: From ‘The Gay Desperado’ to ‘Junior Bonner’

Its funny how this whole “unamerican” investigation is today portrayed like some kind of KKK activity. It is also funny how this same philosophy permeates in hollywood and new york as reflected by the industry. It is also a crying shame to see how sooo many Americans have been duped into not seeing how this country and its moral foudations were the greatest to ever be seen in the world and GOD blessed. Perfect, of course not, but very much good in it. And these very people like the ones on the 10 list and the probably thousands who are apart of the industry today are the very ones eroding this foundation. May GOD judge bettween you and this thing you have done.

Sorry Abigail, but I don’t have any specific contacts. You might want to contact Truthdig. They may know of someone.

Hello,
I am a seventh grade student and i wam doing a histroy project on the hollywood blacklist which requires me to interview someone form that era of time. there-fore, i was wondering if you might possibly have the contact nformation for any of the living survivors of this conflict or any of the living relatives of theirs that experienced it. it would be absolutely wonderful if you could give me the direct information to me, and i would contact them from there.
thank you,
abigail melick