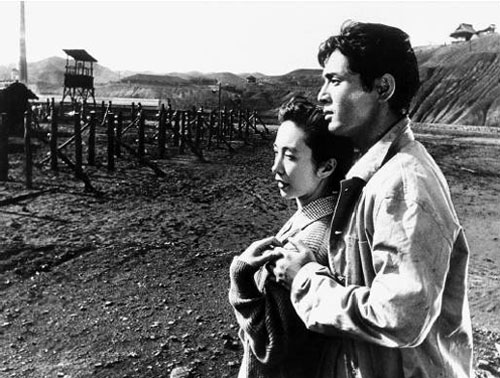 Masaki Kobayashi’s The Human Condition, based on Jumpei Gomikawa’s novel, is probably as well known for its scope and scale as for any other reason.  Originally released as three films – No Greater Love (1959), The Road to Eternity (1959), and A Soldier’s Prayer (1961) – Criterion has packaged everything together as one massive, nine-and-a-half-hour opus chronicling the adventures of Kaji (Tatsuya Nakadai), a young Japanese unwillingly participating in the Imperial Army in World War II.  The film’s themes, subject matter and generally high quality make it easy to overrate, but even if it were half as good as it is, The Human Condition would still be a worthy example of Japan’s most fertile cinematic period, as well as an interesting historical document.

In No Greater Love, Kaji is introduced as an idealistic, educated labor specialist on the verge of marrying his sweetheart Michiko (Michiyo Aratama).  Having garnered a reprieve from military service due to the nature of his work, he is sent to occupied Manchuria to introduce more humane (and, he thinks, necessarily more efficient) labor management techniques to the work camps there.  Bringing Michiko along, he encounters resistance from the camp boss, his immediate superiors, his immediate subordinates, the military representatives and even, indirectly, from the workers and prisoners themselves.

Surprisingly large portions of No Greater Love are given over to the supporting characters, whose schemes and machinations drive the plot more than Kaji’s more reactive idealism.  This results in a more novelistic scope and fully fleshed-out context for the story; No Greater Love thus works as its own film probably better than the other two entries. 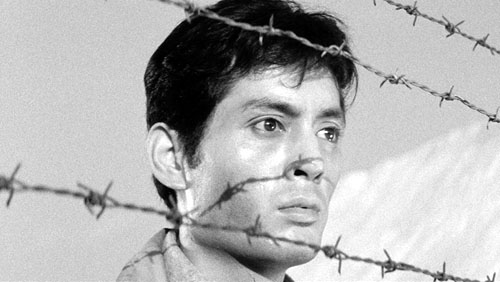 After a great deal of frustration and failure, Kaji inadvertently instigates a minor uprising on the part of the Chinese POWs; he is then jailed, loses his military exemption and is subsequently drafted. (For the sake of the readers who haven’t seen the films yet, as well as those who don’t feel like trudging through a 30,000-word review, I’m being deliberately vague in my plot summary.)

The Road to Eternity chronicles Kaji’s military service which, unfortunately for him, takes place during the demoralizing last years of the war.  Though hardly enthusiastic about army life, his natural diligence and competence carry him through basic training and, at first, spare him from all but mild contempt from his superiors.  However, his seemingly innate attraction to lost causes spurs him to befriend a hopelessly clumsy and weak fellow private.  His efforts to protect the man from abuse at the hands of the bullying officers in his unit attracts the wrong kind of attention; once again, Kaji finds himself at the bottom of a particularly brutal pecking order.

Matters do not improve when he receives his commission as commander of a unit of elderly and infirm trench-diggers – the neighboring artillery squad outdoes everyone else up to this point in their zeal for physically and mentally torturing the luckless hero.  The film’s climax comes when Kaji is forced to do the one thing he’d most hoped to avoid in his soldiering career: fight in a battle.  He does so valiantly but in vain, as most of his men are wiped out by the advancing Soviet army. (I should note here that the battle sequence is impressively done, featuring some particularly good stunt work – Nakadai bravely allows a tank to roll over his foxhole and dummy shells explode disconcertingly close to the other actors.) The Road to Eternity fades out with the war lost and Kaji half-crazed at what he’s been forced to do by the stresses of battle.

A Soldier’s Prayer is different from its predecessors in significant ways.  It’s far more episodic in nature, following Kaji, his surviving men and various other refugees, soldiers and hangers-on through the anarchic post-war Chinese countryside.  Kaji’s ultimate goal is to cross into southern Manchuria, where he hopes to reunite with Michiko (seen only very briefly in this film).  Distractions abound, though, as he is forced to deal with a host of more pressing survival concerns. Characters, likewise, are not fixed, joining his quest for a few scenes and dropping out for good shortly thereafter.

Kaji and his band endure trial after trial, only to fall into the hands of the Soviets.  The last major segment of the film details Kaji’s imprisonment in a forced-labor camp (bringing him full circle from where he began in the beginning of the first film) and his mistreatment at the hands of the Japanese officer appointed to watch over the defeated prisoners.  Finally unable to absorb any more punishment, Kaji snaps, gruesomely murders the officer and escapes.  He continues his journey home in a most degraded, barely human state: unshaven, starved, clad in rags, unable even to speak.  I’ll stop before I reach the very final scenes of the film, but I will say that they’re, tonally, of a piece with the rest of the trilogy.

The Human Condition is often referred to short-handily as an anti-war or anti-military film. That’s a fair characterization as far as it goes, but it doesn’t go far enough. What Kobayashi’s film does is deflate any and all of the ideologies bequeathed to us by the modern world, showing them up as pernicious myths. Kaji’s belief that labor can be managed humanely and rationally is swept away by his time in the work camps; his patriotism, by the conduct of the Japanese military; his sympathy for socialism, by his encounter with the tender mercies of the Red Army. Even his pacifism, which many mistakenly believe to be the theme of these films, fails him on a number of occasions, proving to be wholly inadequate, both morally and practically, to the brutal situation he finds himself in.

By the end of the third film, Kaji continues his struggle not for any set of ideals, but for his devotion to Michiko. This anti-ideological preference for the concrete over the abstract – a specific person as opposed to “the people” – represents the only thing worth fighting for in the world of the film, even if that effort is likely to end in defeat and futility. (Kobayashi gives visual expression to this notion with a recurring image, lifted from Greek myth (or maybe Camus?), of figures trudging up and down steep inclines.) Of course, this is itself an ideology, one that was fashionable in an exhausted post-war world. But The Human Condition comes by its bleak existentialism honestly, meting out punishment to its naive protagonist for nearly the whole of its running time. 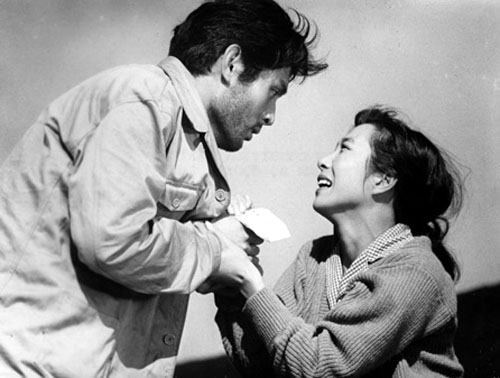 Still, as nine-and-a-half hours of a butterfly being broken on a wheel goes, the trilogy is well-paced and well-written enough that my marathon two-day viewing session was never less than engaging. The large cast does well with its many small parts, and Nakadai, though apparently early in his career at this point, carries this mammoth movie admirably, keeping his dignity in a character that could easily have come off as simply irritating and pathetic.

Some other aspects of the film don’t fare quite as well. It may be perverse to say this, but I don’t think Kobayashi shows any great aptitude for the widescreen format (in this case “Grandscope”, the studio Shochiku’s version of CinemaScope) – at least not here. The many shots of small groups of men (officials in meetings, soldiers gathered in packs, laborers laboring) are well-balanced and do a fair job of spreading the players across the frame, but are often too wide and too static. I confess that I sometimes lost track of who was speaking to whom during scenes staged like this, an effect that I can’t imagine was intentional.

However, things improve markedly in A Soldier’s Prayer – the looser structure seems to free Kobayashi stylistically. The relatively staid presentation of the first two parts is shaken up by voice-over narration, ostentatiously canted angles, and abrupt and disconcerting transitions between scenes. This is the Kobayashi who would go on to make less grandiose but, frankly, better movies like Harakiri and Samurai Rebellion. 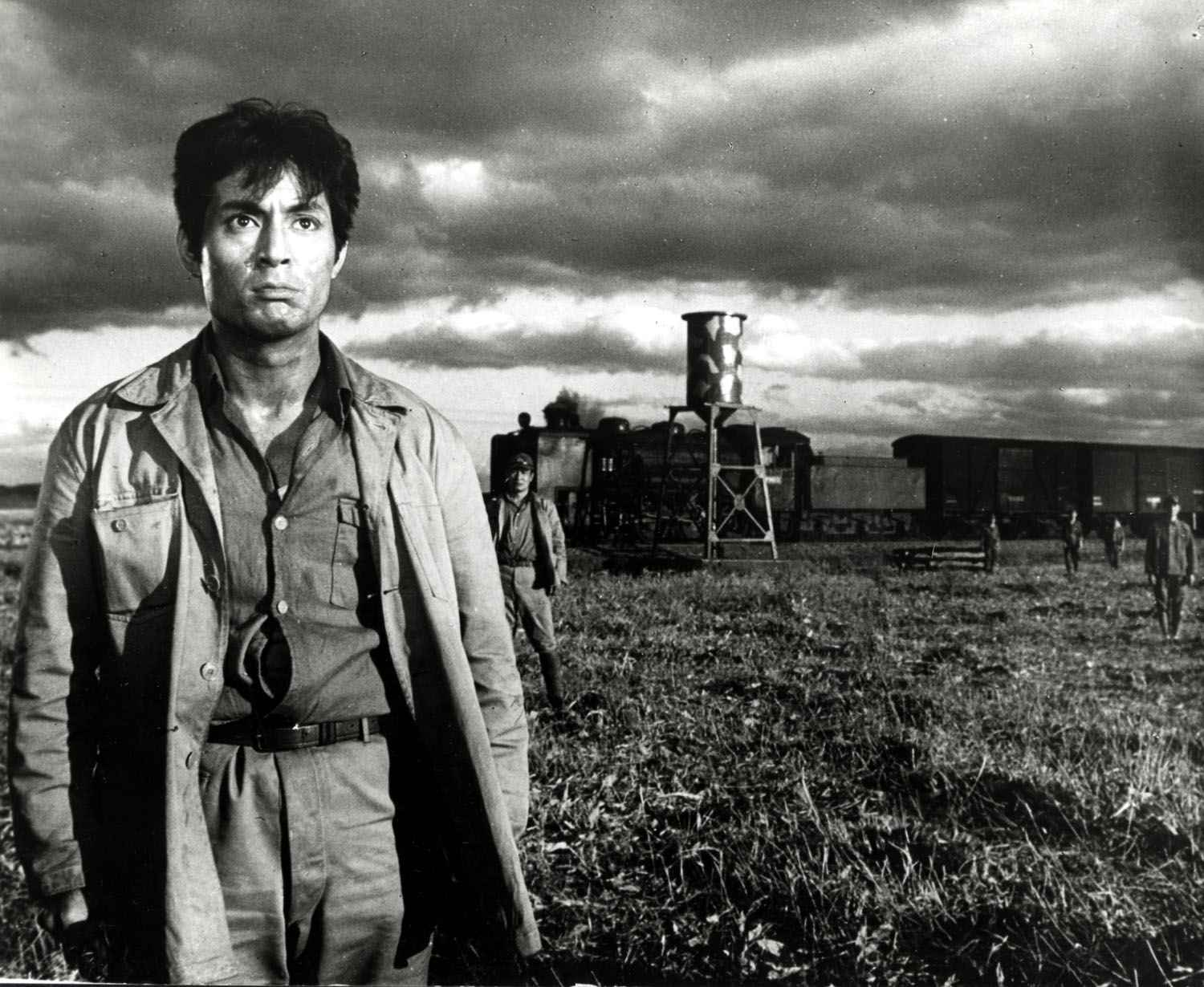 Criterion has done a typically excellent job of presentation. The image is nice and sharp, with particularly fine variation in the grayscale; the sound, especially the stereo tracks of A Soldier’s Prayer (the other two are in mono), is as good as you’re likely to hear from a 50-year-old recording. A fourth disc is devoted to extras: trailers for the three films (each of which prominently mentions cinematographer Yoshio Miyajima), and interviews with Kobayashi, Nakadai and Human Condition fan Masahiro Shinoda are all interesting and worth a look. A short essay by Philip Kemp is included in place of commentary tracks.

Photos: Courtesy of the Criterion Collection