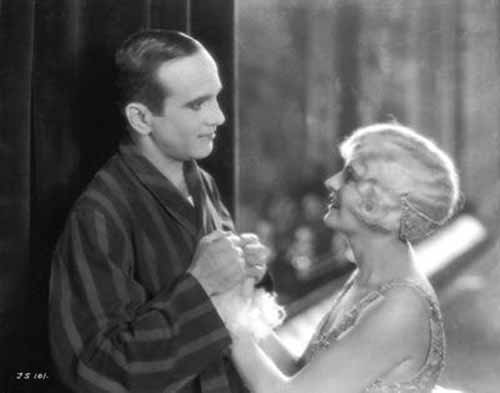 The Jazz Singer with Al Jolson and May McAvoy. Zero chemistry, but film history all the same.

Though hardly a cinematic masterpiece – or even a good film, for that matter – the 1927 version of The Jazz Singer remains one of the most important motion pictures ever made. This part-musical, part-silent, all-mush melodrama marked the first time in a feature film that synchronized sound and voices could be heard in musical numbers and talking segments.

The Jazz Singer received a Special Academy Award at the first Academy Awards ceremony as “the pioneer outstanding talking picture, which has revolutionized the industry,” in addition to a (thoroughly undeserved) Oscar nomination for Writing – Adaptation for Alfred Cohn. Therefore, it’s appropriate that the Academy of Motion Picture of Arts and Sciences will be celebrating the film’s 80th anniversary next Friday, October 5, at 8 p.m. at the Samuel Goldwyn Theater in Beverly Hills.

For the event, Warner Bros. has made a newly restored and remastered digital version from the earliest surviving nitrate film elements and original Vitaphone sound-on-disc recordings. The Jazz Singer will be presented by the Academy in association with the American Cinematheque and Warner Home Video. Film critic Leonard Maltin will host the program.

Based on the hit Broadway show starring George Jessel and written by future Ernst Lubitsch collaborator Samson Raphaelson, The Jazz Singer was conceived as a silent film with a synchronized score and sound effects. When Al Jolson was brought in – George Jessel’s salary demands were too high and second-choice Eddie Cantor turned down the role – synchronized singing sequences and bits of dialogue, totaling about two minutes, were added to the film. (In The Jewish Journal, Pat Sierchio gives different versions of the story behind Jessel’s departure from the project, in addition to providing a thorough description of the film’s ethno-cultural background.)

During his first vocal performance, Jolson ad-libbed what would become a landmark movie quote: “Wait a minute, wait a minute, you ain’t heard nothin’ yet!”

Unfortunately, that’s as memorable as it gets for the dialogue and situations found in Alfred Cohn’s adaptation and Jack Jarmuth’s titles. The plot – filled with cliches even by 1927 standards – revolves around a cantor’s son who wants to sing onstage, not in synagogues.

“I had a simple, corny, well-felt little drama,” Samson Raphaelson later said. “And they made an ill-felt, silly, maudlin, badly timed thing of it.”

Jolson, for his part, doesn’t help matters any. (Admittedly, George Jessel – considering his star-imploding turn in the godawful Lucky Boy [1929] – would have been no better.)

Unlike Jolson’s revolting “Negro” in the equally revolting Big Boy (1930) – as per the American Cinematheque, the only film version of a Jolson Broadway show – the Jazz Singer‘s musical numbers in black face don’t offend me but Jolson’s hamminess does. “The World’s Greatest Entertainer” was so addicted to the limelight that in the film he looks just about ready to swallow whole not only the scenery, but also all of the furniture and his fellow players, beginning with chunky scene-stealer Warner Oland. The guy wanted no competition from any quarter.

(In the 1960s, film historian Anthony Slide interviewed actress-singer-tapper Ruby Keeler, Jolson’s wife from 1928 to 1939. Keeler remarked to Slide that when she had her make-or-break number in a stage musical – probably Ziegfeld’s Show Girl – Jolson, seated in the audience, stood up and started singing along with her. That became remembered as the magical moment that made Keeler a star. Keeler’s view of the episode was considerably less rosy. She expressed resentment at having her big moment taken away from her by her husband, who couldn’t keep his bellowing trap shut.)

In the last several decades, Jolson’s reputation has suffered because one can’t think of the performer without thinking of the use of black face – and vice-versa. Jolson’s defenders have correctly asserted that times were different in the first half of the 20th century, and that the use of black face per se didn’t necessarily imply a racist attitude on the part of the performer. That said, Jolson’s numerous portrayals in black face are grating, if not because of the paint job on his face – which, in my view, just makes him look stupid – then because of his appalling mix of hamminess and coyness.

(Off-screen, Jolson was apparently anything but coy in regard to ethnic matters, at least when it came to property values. On the March 29, 1938, issue of The Hollywood Reporter, an article read that a “petition by members of the film colony for restrictions barring all but the white race from residing in the San Fernando Valley met with defeat yesterday when the city council decided it had no jurisdiction.” The Reporter added that “led by Al Jolson, residents had asked that the areas made up of Studio City, Canoga Park, Encino and their environs be zoned and that others than whites be barred from residence.”)

The Jazz Singer was directed by the long-forgotten Alan Crosland – one of the guilty parties behind Big Boy, but whose Don Juan, Warners’ first feature-film with synchronized score and sound effects, is a highly enjoyable period comedy-romance-swashbuckler.

Supporting Jolson are May McAvoy (the leading lady in the 1925 version of Ben-Hur, and whose sound film career was ruined by an alleged stutter), the aforementioned Warner Oland (not playing Chinese, for a change), Eugenie Besserer, and – if you blink you’ll miss her – Myrna Loy as a chorus girl.

Sam Warner, one of the Warner Bros., was credited with spearheading the Vitaphone sound-on-disc process and The Jazz Singer in particular. Warner, at the age of 39, died the day before the Jazz Singer premiere on Oct. 6.

Tickets to The Jazz Singer are $5 for the general public and $3 for Academy members. Tickets may be purchased online at www.oscars.org until noon PDT on the day of the event. There are no minimum order requirements and no transaction or processing fees. Tickets may also be purchased by mail or in person at the Academy box office during regular business hours.

Doors will open at 7 p.m. Seating is on a first-come, first-served basis. The Samuel Goldwyn Theater is located at 8949 Wilshire Boulevard in Beverly Hills. For additional information, call (310) 247-3600.

On Oct. 6 at The American Cinematheque’s Egyptian Theatre is screening the painful Al Jolson in a Plantation Act, a 1926 musical short – with Jolson wearing you-guess-what – that feels longer than most features. Also in the program, a cabaret performance featuring Richard Halpern singing Jolson songs; the highly fictionalized 1946 biopic The Jolson Story, starring Oscar-nominee Larry Parks; and a party celebrating the 80th anniversary of The Jazz Singer.

On Oct. 7, The Egyptian is screening an Al Jolson double feature: the so-awful-it-must-be-seen-to-be-believed Big Boy, and the 1933 musical Hallelujah I’m a Bum. After a mere five or so years starring in talking pictures, Jolson was already passé by the time he made Hallelujah. He meets his hammy match in the form of equally passé silent film comedian Harry Langdon and shameless scenery-chewer Frank Morgan. But all is not lost: the lovely and talented Madge Evans is the film’s leading lady. Lewis Milestone directed.

More information on the Jolson tribute.

The Jazz Singer 1927 photos: Courtesy of the Margaret Herrick Library

How to Be a Latin Lover: Ricardo Cortez & Leading Ladies

Ben-Hur: A Tale of the Christ (1925): Biggest Silent Blockbuster

Everytime I see Al Jolson get trashed for his “hammy” performances, I keep repeating the same old thing. See him in “HALLELUJAH, I’M A BUM” (1933). He is quite toned down by director Lewis Milestone and he actually shares the spotlight with the other actors!

The Rogers and Hart score is nice, and much of the
dialog is sung in rhyme. This is such an overlooked movie, but it has been available on DVD for years.

Incidentally, in England the film had to be retitled
as “HALLELUJAH, I’M A TRAMP” because “Bum” seemed to have a slightly different connotation.