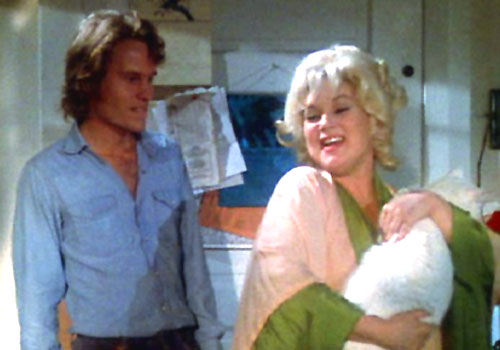 The Killing Kind with Ann Sothern and John Savage.

When I read that The Psychotronic Encyclopedia of Film described Curtis Harrington’s The Killing Kind as “a seldom-seen sickie” I just knew I had to see it. And it was well worth my time.

After a young man, Terry Lambert (John Savage), is released from prison for a rape he was “forced” to commit, strange things begin to happen. He returns home to live in his mother’s boarding-house and spies on one of her tenants (Cindy Williams). But spying is not the only perversion on Terry’s mind. He strives to get even with the rape victim (Sue Bernard of Faster, Pussycat! Kill! Kill! fame) who put him behind bars and the lawyer who failed to defend him (screen veteran Ruth Roman). Along the way, the strait-laced neighbor (Luana Anders) tries to seduce him, but young Terry has enough “older woman” trouble with his own mother.

The always marvelous Ann Sothern plays Mom (Thelma), whose solution to all of her son’s problems is a glass of chocolate milk. It is hinted that she is a former showgirl in a scene when she and Terry dance together; in fact, mother and son enjoy each other’s company so much that they seem to be a truly happy family. He calls her Thelma and teases her good-naturedly, but he has some unaddressed “issues” seething inside him. I probably should add that the only scene between them I didn’t like was when Terry has one of his Post-Traumatic Shock moments and lashes out at Thelma, calling her a “fat whore.”

As the misunderstood lunatic, John Savage is remarkably good. And fans of TV’s Laverne and Shirley will see a different side of Cindy Williams as the seductive female who inexplicably still remains in the boarding-house even after Terry tries to drown her in the swimming pool. I don’t understand why she would stick around to meet her fate in a bathtub, but lack of logic is one of the faults found in The Killing Kind.

Sothern was at the end of her illustrious career at that time, as The Killing Kind came between her pathetic role in Lady in a Cage (1964) and her crime-spree accomplice in Crazy Mama (1975). Yet, she was beautifully photographed in color by cinematographer Mario Tosi; her face still looked lovely and she did not look at all like a 64-year-old woman. Indeed, she still had the charm and appeal of all her earlier, more conventional films.

Director Curtis Harrington was usually very effective when handling these morbid melodramas. Prior to The Killing Kind, for instance, he had directed Shelley Winters in the horror-hag shockers What’s the Matter with Helen? and Whoever Slew Auntie Roo?, both in 1971. Even so, although The Killing Kind works in parts, it does not work as a whole. I found it too unstructured and incohesive. I appreciate the black humor and the perversity, but I’ve seen this “pretty boy/psycho killer” theme done better before. The screenplay by Tony Crechales and George Edwards may be partly to blame for the uneven product.

But for cult-movie fans, The Killing Kind remains something of a forgotten treasure, even if just for seeing Ann Sothern again. A “seldom-seen sickie” indeed.

Kirk Douglas Movies: Out of the Past + A Letter...

I recall seeing a circa 1930 film featuring Ann Sothern in a finale where she stands on stage holding hands with the cast (and next to the really tall skinny male lead) singing “I Can’t Believe That You’re in Live With Me.” Can anyone tell me the name of the musical? Thanks.