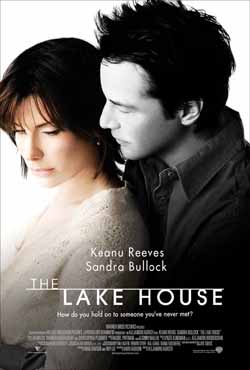 In Alejandro Agresti’s romantic fantasy The Lake House, Sandra Bullock and Keanu Reeves play two pen pals (a.k.a. platonic lovers) separated not by physical or emotional space, but by an even more gigantic obstacle: time. Two years to be exact. You can put the blame for this cosmic mess on the U.S. postal service or on the mutt that magically shows up at the lake house in both the past and the future, but there’s a good reason for all this time warping. Without it, our two lovebirds would never have heard of each other. Obviously, the film’s main question is, Will the lovers ever meet? No prizes for those who guess right.

“A stubborn illusion” is how Einstein once described the distinction between past, present, and future. He might as well have been talking about the depiction of human relationships in commercial movies such as The Lake House. Apart from the basic plot gimmick – and a clever (if hardly unexpected) revelation near the end – The Lake House offers little more than two box office names posing for the camera while uttering platitudes about love, family, and friendship.

Based on Hyun-seung Lee’s slick, MTV-ish Siworae / Il Mare (2000), this Hollywoodized remake is more conventional and less visually striking than the original. Yet director Alejandro Agresti’s subdued approach has actually made the absurd story a tad more appealing and heartfelt than the glitzier Korean film. If Il Mare has the feel of a cosmic soap commercial, The Lake House has the feel of a cosmic soap opera.

Additionally, Agresti (with the assistance of editors Alejandro Brodersohn and Lynzee Klingman) keeps the story moving at a steady pace, while screenwriter David Auburn has fleshed out several supporting characters that are brought to life by high-caliber actors such as Dylan Walsh, Willeke van Ammelrooy (the star of the 1995 foreign-language Oscar winner Antonia’s Line), and Academy Award nominee Shohreh Aghdashloo (for House of Sand and Fog). In the final count, however, all of the film’s humans are outacted by a chess-playing dog in dire need of a bath.

Those who enjoy a mix of workmanlike filmmaking and manufactured romances will not be disappointed with The Lake House. On the other hand, those who believe that romantic movies should offer more than solid production values, plot gimmicks, star power, and pop ballads should probably look for entertainment elsewhere.

When Kate Forster (Sandra Bullock) leaves her house by the lake to move to Chicago, she posts a letter to the future tenant asking that her mail be forwarded to her new address.

When she receives a written response from new tenant Alex Burnham (Keanu Reeves), an architect who makes a living as a construction worker, Kate learns that no one has lived in the lake house in years. She also finds it strange that Alex’s letter is dated 2004 – two years earlier than the present.

Eventually, Kate and Alex come to the realization that they are living two years apart. This minor glitch in the patchwork of time doesn’t faze them nearly as much as their own personal dramas: Kate is alone, having ended an unsatisfying relationship with a businessman named Morgan (Dylan Walsh), while Alex is upset because he and his detached father (Christopher Plummer), a renowned architect who had built the lake house, don’t get along.

As their penpal-manship develops into a platonic romance, Kate and Alex set up a 2006 meeting at a fancy Chicago restaurant. Kate waits and waits, but Alex doesn’t show up. What could have happened?

A couple of key differences between Siworae / Il Mare and The Lake House:

A couple of key similarities between Siworae / Il Mare and The Lake House:

The Hobbit Behind the Scenes with Peter Jackson + Taylor...

Thank you so much for such a wonderfully cast, beautifully moving piece of art. No two actors alive could have played the parts of Alex and Kate better than, Sandra Bullock and Keanu Reeves. Possibly my most favorite movie in a lifetime.

Thank you again. For revealing just how deeply one can love.
Christine

Prescriptum : I hope you will understand the global ideas of my letter, it’s a long time ago, I have been writing a letter in English…
Paris, 1 of March 2007

I would like to express my deep gratitude to you and to whole of the Team, including this extraordinairy dog Jack, with whom you created the "Lakehouse û. Thank you all, deelpy from my soul.
For this wonderful, rich and simple manner in which you show the several levels of our conscience, of our being, what allows an multiple understanding.
For the beautyful, sensitiv and funny composition of sounds, melodies (special MERCI to Rachel Portman) , colours, pictures, words, people trough which you transmit the idea of our transition on earth, the life before and after the Life here and how they coexiste in us and how they influence each other. (So I percieved the movie)
The Idea of the glashouse in/over the lake is brilliant! For me it is a beautiful expression of the moment, when we are more desincorporated than normally, we are less here and more there, in the same time, due to a deep connexion with a soul we love, to whom we are attached, but who is in the other world. When we are more in the spirit than in the chair, when we are about to get re-born in this world, when we are in the water of the univers, before coming really into this world on Earth, before being connceted by the fire of this planet, by love. At least, I interpretated it like this due to my own experience. Once, when I felt the presence of a soul before being pregnant and once just before and after the little daugther I had in my body left again to the other world at the same time like my mother, to whom I felt equally a deep etherical link.
It seems to me, that the real understanding of thoses connexions will always stay a mystery for us. But the perception of them gives us the conscience that we are a part of this wonder-ful univers and of our chance and our responsability here.
At this time I thought to make once a movie about the beauty and difficulty of those moments of transition, before and after the incarnation and the spirituel links between different souls, the link with the univers. The deeper understanding of this allows us to accept our being on Earth in a more peaceful manner and to enjoy it more. The mouvie should be about the beauty of the conscience in which a man and a women create the physical body, the home for the souls, their futur children and about the beauty of the conscience the help their parents to leave their physical body to go back to the other world. About the re-naissance after the arrival or departure of a soul in our life. May be you should do this mouvie ? It can help, heal a lot many people, women as well as men, from the suffering due to that they lost a baby, a child or some( old ) person they loved and give them more conscience of their divinity.