The Man from U.N.C.L.E. Box Office: One of Biggest Flops of the Year

Budgeted at a reported $88 million, to date Pixels has collected a mere $61.11 million in North America. Overseas things are a little better: an estimated $73.6 million as of Aug. 9, for a worldwide total of approx. $134.71 million.

Sounds profitable? Well, not yet. First of all, let’s not forget that distributor Sony Pictures likely spent another $45 million (about 50 percent of the production budget) marketing and distributing Pixels. And that, as a rule of thumb, Hollywood studios add to their coffers about 55 percent of a movie’s domestic gross and 40 percent of its international gross.

Then we have Fantastic Four, toplining Miles Teller, Jamie Bell, Kate Mara, and Michael B. Jordan, which suffered the worst debut of a big-budget superhero movie so far this century. After a week, the $120 million-budget 20th Century Fox release has grossed a paltry $33.96 million in the U.S. and Canada, in addition to $38.96 million internationally up to last Aug. 12.

Warner Bros.’ The Man from U.N.C.L.E., which opened with an estimated $900,000 last night (Aug. 13), cost a reported $80 million. According to Deadline.com, the Guy Ritchie-directed action-thriller-comedy is expected to gross a paltry $5 million on Friday (including the Thursday evening take) for a total of $14-$15 million from 3,638 theaters by Sunday evening – down from earlier estimates in the already meager $17-18 million range.

The Man from U.N.C.L.E. does have a chance to perform better internationally – Henry Cavill’s Man of Steel grossed $377 million overseas vs. $291.04 million in North America, and there has been all that buzz about the upcoming Batman v Superman: Dawn of Justice, starring Cavill and Ben Affleck, and the recently announced The Justice League Part One and Justice League Part Two movies, also featuring Cavill as Superman. But in order to compensate for its dismal North American grosses, The Man from U.N.C.L.E. will have to do really well elsewhere. 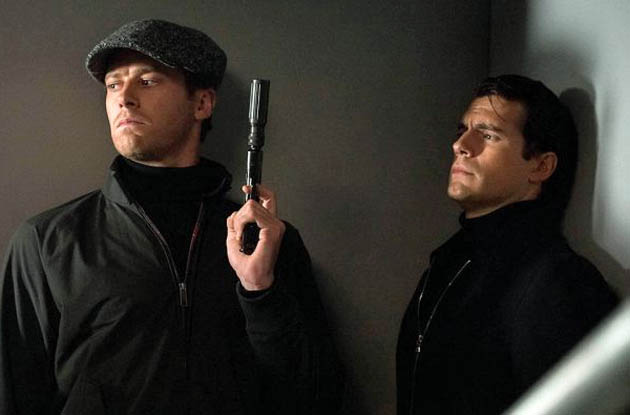 I should add that The Man from U.N.C.L.E. is Henry Cavill’s first post-Man of Steel star vehicle and Armie Hammer’s first starring role since the mammoth 2013 box office bomb The Lone Ranger, co-starring Johnny Depp. Hammer has thus far not been very lucky with his post-The Social Network choice of movies: Clint Eastwood’s J. Edgar, starring Leonardo DiCaprio; Mirror Mirror, starring Julia Roberts; and The Lone Ranger have all been box office and critical disappointments – or worse.

Somewhat ironically, the no. 2 film this weekend is expected to be another humorous thriller based on a 1960s television series, Mission: Impossible – Rogue Nation, directed by Christopher McQuarrie and featuring Tom Cruise, Jeremy Renner, and Alec Baldwin.

Somewhat Ironically Part II: Tom Cruise was to have starred in The Man from U.N.C.L.E., but dropped out of the project reportedly to focus on MI5. His replacement was Henry Cavill.

Now, the no. 1 movie at the domestic box office this weekend? F. Gary Gray’s musical biopic Straight Outta Compton, which could reach as high as $60 million by Sunday night and that can be considered one of the year’s biggest sleeper hits. The film features O’Shea Jackson Jr. as Ice Cube, Corey Hawkins as Dr. Dre, and Jason Mitchell as Eazy-E.

Don’t expect Straight Outta Compton to be nearly as successful internationally. In fact, this is the sort of movie that is made for particular audience segments in the United States proper.

Besides Armie Hammer as KGB agent Illya Kuryakin and Henry Cavill as CIA agent Napoleon Solo, The Man from U.N.C.L.E. features the following:

The screenplay is credited to Guy Ritchie and Lionel Wigram (Sherlock Holmes), from a story by Ritchie, Wigram, David C. Wilson (Supernova), and Jeff Kleeman (one of the film’s producers).

Among the series’ countless guest stars were: