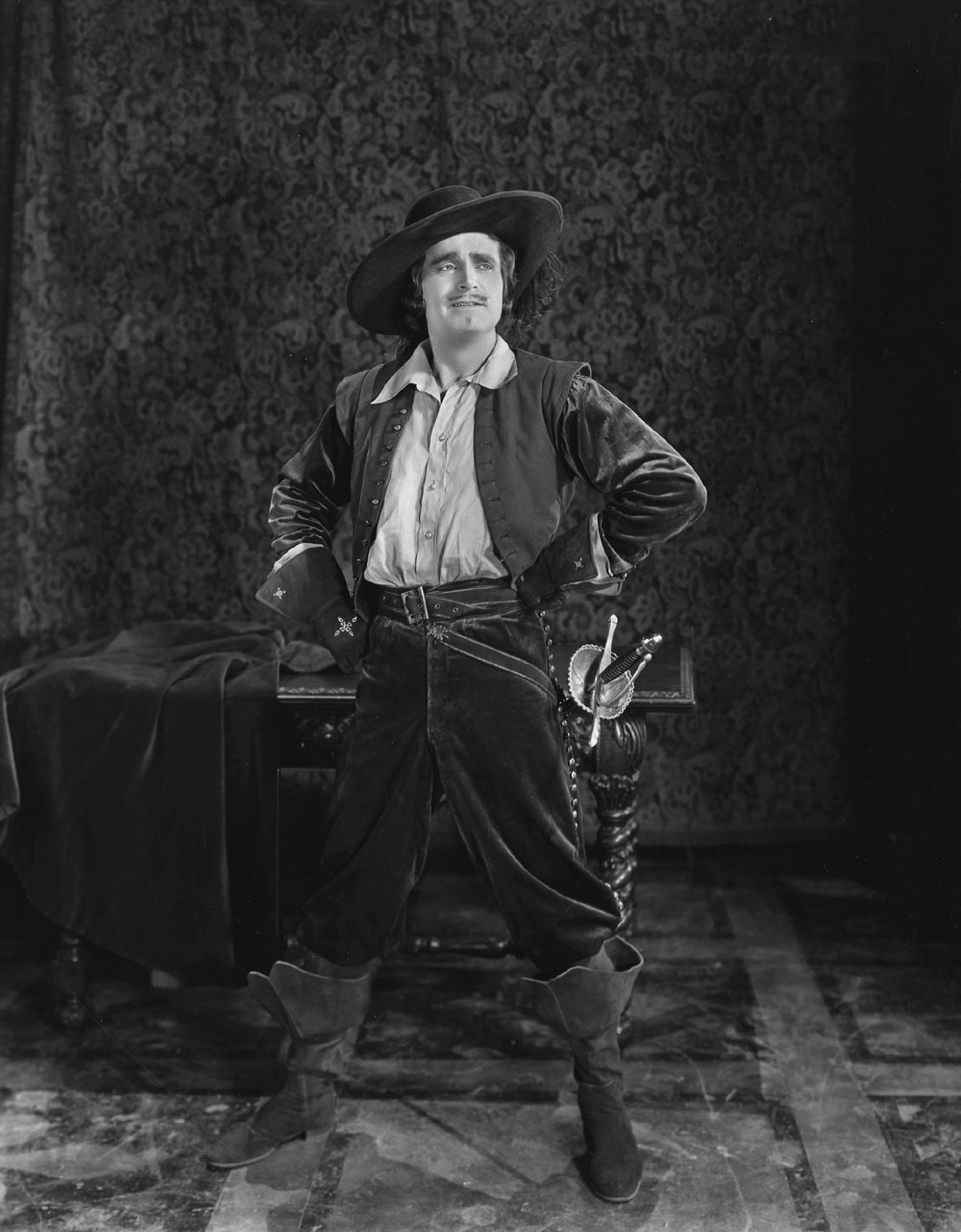 Douglas Fairbanks with Julanne Johnston The Thief of Bagdad (top); Fairbanks in The Iron Mask. 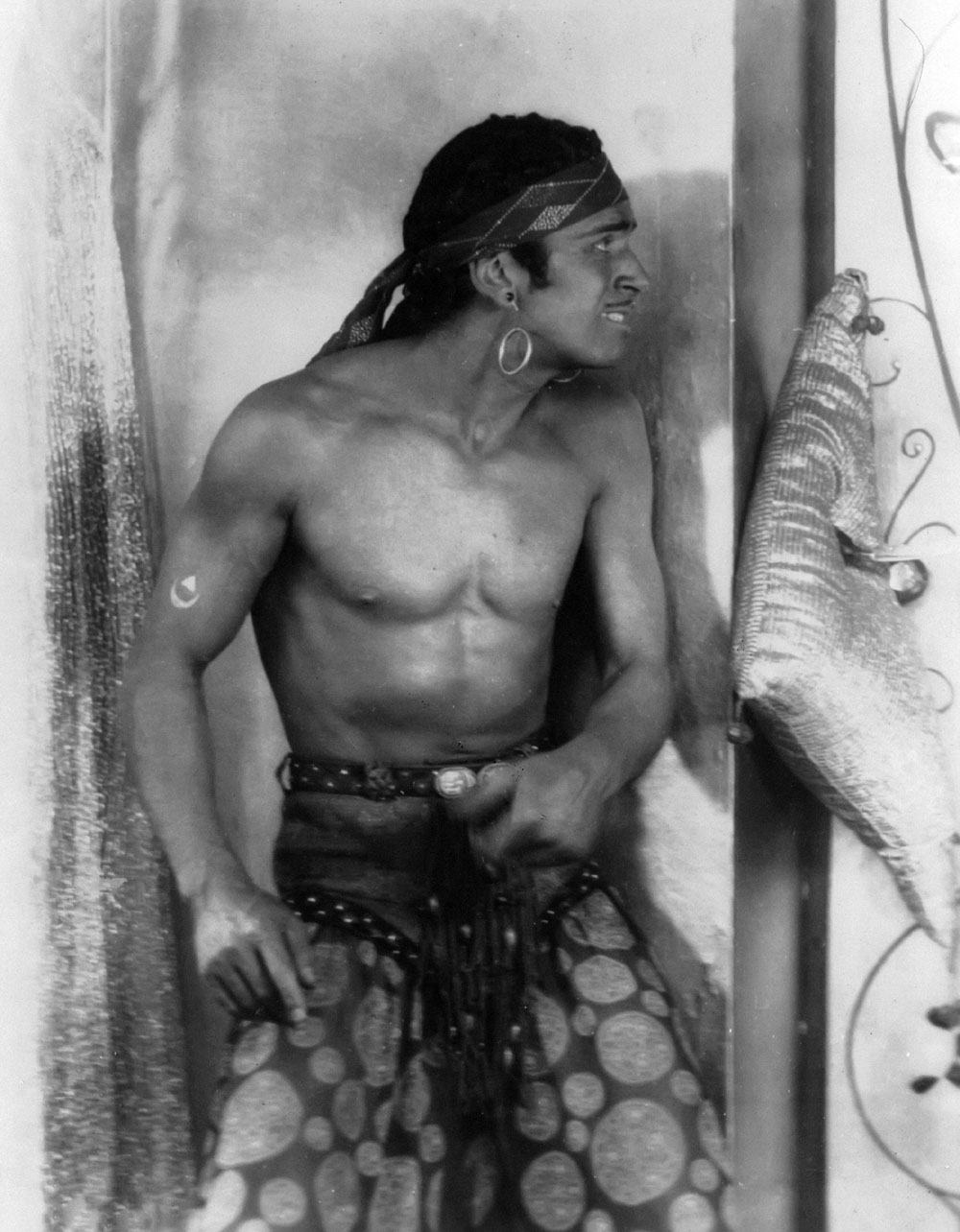 Rare screenings of the Douglas Fairbanks adventure classics The Thief of Bagdad (1924) and The Iron Mask (1929) will be presented on Friday, March 20, and Monday, March 23, respectively, at the Academy of Motion Picture Arts and Sciences’ Samuel Goldwyn Theater in Beverly Hills. Both screenings will start at 7:30 pm. Silent film historian and preservationist Kevin Brownlow will be a guest presenter at both events.

In the enjoyable The Thief of Bagdad (1924), directed by Raoul Walsh, Fairbanks plays a (mostly bare-chested) thief who falls in love with the Caliph of Bagdad’s daughter (Julanne Johnston, in her most important film role). There’s just one glitch: in order to win her hand the thief must find a rare treasure. This screening will feature a color-tinted print restored by Brownlow and David Gill, and a stereo musical score composed by the excellent Carl Davis.

A book signing celebrating the publication of Douglas Fairbanks by Jeffrey Vance, with Tony Maietta and photographic editor Robert Cushman, will take place before the March 20 screening. Vance and Maietta will introduce the program. 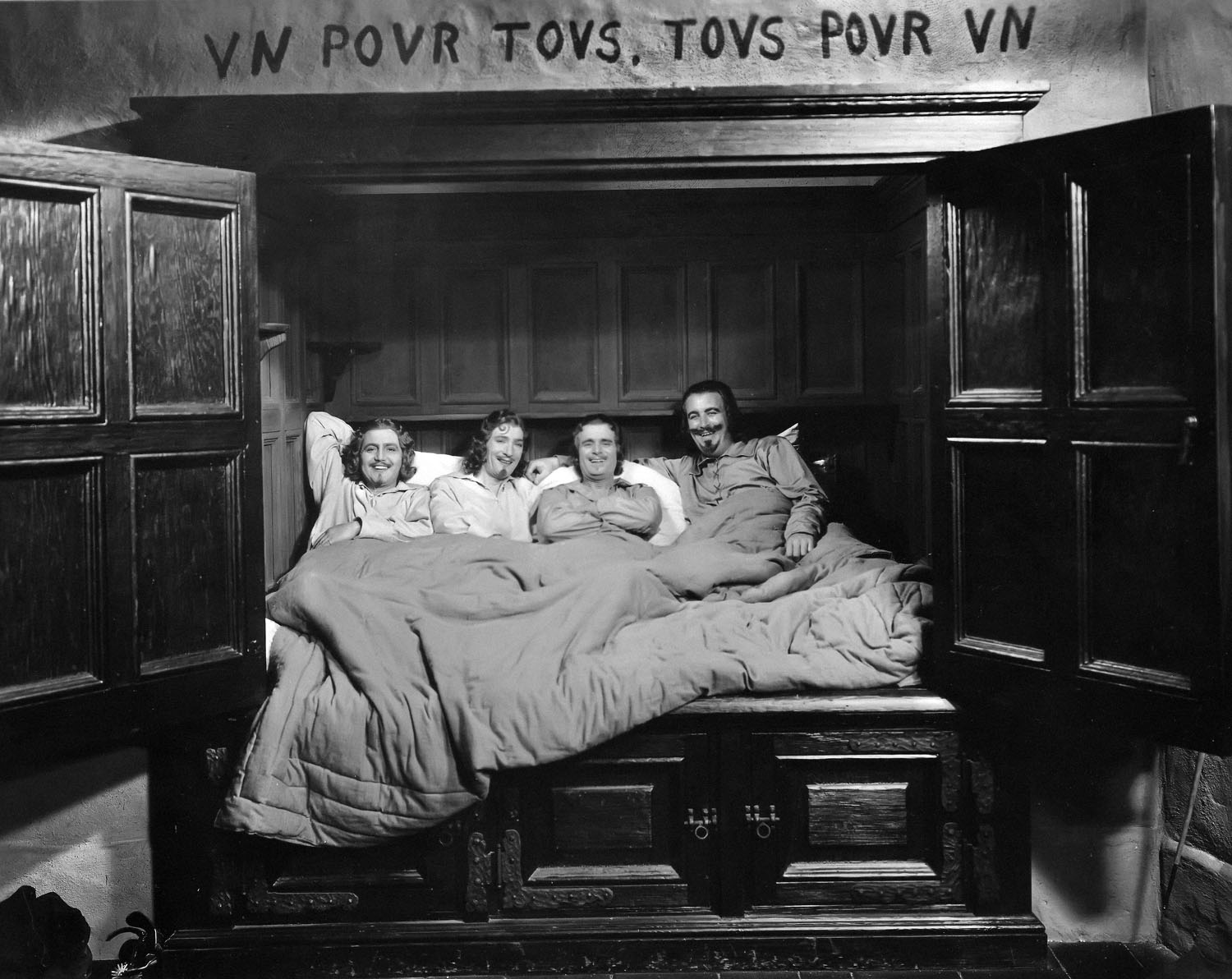 In The Iron Mask (1929), Fairbanks (above, in bed with Leon Barry, Gino Corrado, and Stanley J. Sandford – blame it on those anything-goes pre-Production Code days) reprises his role as d’Artagnan from his 1921 hit The Three Musketeers. In this later adventure, also based on an Alexandre Dumas novel and directed by Allan Dwan, Fairbanks/d’Artagnan becomes enmeshed in intricate royal intrigue involving King Louis XIII’s twins. 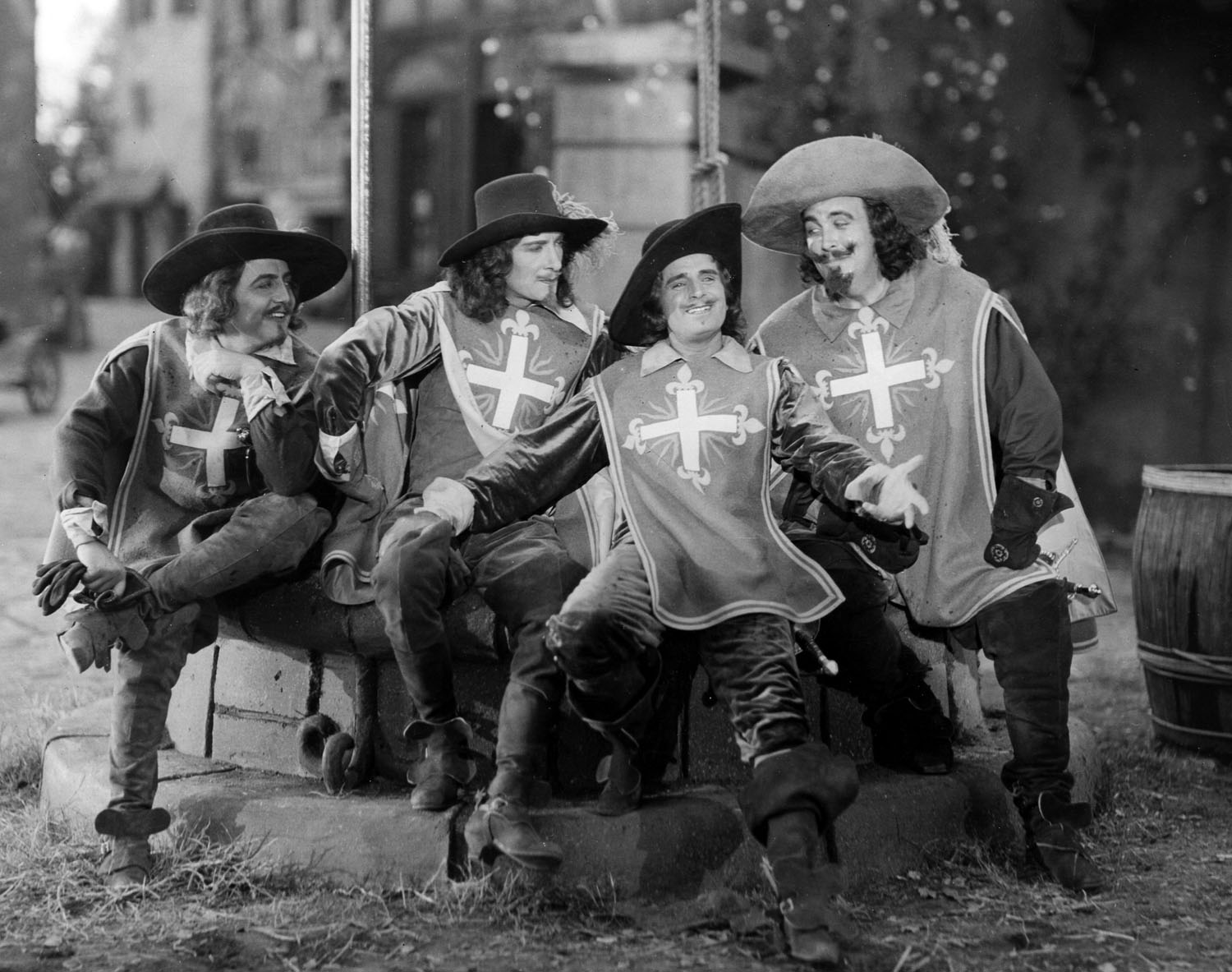 The Iron Mask marked Fairbanks’ last silent film appearance and his last “straight” swashbuckling role. (He’d sort of parody his former bouncingly amorous self in the 1934 talkie The Private Life of Don Juan.) The Academy screening will feature a print restored under the supervision of Brownlow and Patrick Stanbury, with a stereo musical score composed by Davis and the original sound prologue by Fairbanks.

I dare you not be moved by the Iron Mask‘s bittersweet finale, which happened not only to be the end of the film but also to represent the end of an era.

Among special guest Kevin Brownlow’s books are The Parade’s Gone By; The War, the West and the Wilderness; Hollywood, the Pioneers; Behind the Mask of Innocence; David Lean; and Mary Pickford Rediscovered. His documentaries (some co-directed with David Gill) include the outstanding Hollywood and Cinema Europe: The Other Hollywood, plus Unknown Chaplin, Buster Keaton: A Hard Act to Follow, Harold Lloyd: The Third Genius, D.W. Griffith: Father of Film, Cecil B. DeMille: American Epic, and Garbo. Among his many silent film restoration projects are Abel Gance’s 1927 epic Napoleon and Fred Niblo’s 1925 blockbuster Ben-Hur, starring Ramon Novarro.

The Academy’s Fourth Floor Gallery exhibition Douglas Fairbanks: The First King of Hollywood will be open for special viewing hours from 5 to 7 p.m. and after each screening. The exhibition, which runs through Sunday, April 19, presents a look at Fairbanks the movie star, studio founder (United Artists), husband of Mary Pickford, philanthropist, and civic leader through film clips, movie posters, props, costumes, original documents and photographic imagery. Admission to the exhibition is free.

Tickets to The Thief of Bagdad and The Iron Mask are $5 each for the general public and $3 for Academy members and students with a valid ID.

The Samuel Goldwyn Theater is located at 8949 Wilshire Boulevard in Beverly Hills.

Douglas Fairbanks The Thief of Bagdad and The Iron Mask images: Courtesy of the Margaret Herrick Library.

Remember seeing this movie on TV in the 1950’s. My Uncle Gino (Gino Corrado) is on the left in both group pics.

We saw him all the time in the old movies shown on TV back then.