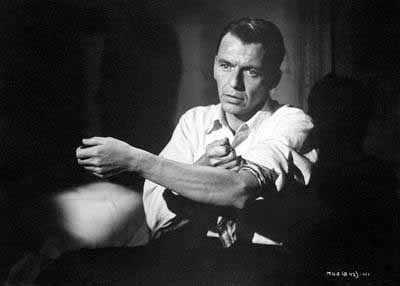 Frank Sinatra in ‘The Man with the Golden Arm’: Groundbreaking drug addiction drama.

Although hardly one of Otto Preminger’s better films, The Man with the Golden Arm is worth a look for two reasons: It’s quite likely the first major Hollywood motion picture – since the implementation of the moralistic Production Code in the mid-1930s – to deal with drug addiction, and it boasts what may well be Frank Sinatra’s most effective performance.

The film itself, however, is pure melodrama. As a cripple, Eleanor Parker, in particular, disappoints. Parker could be an outstanding actress – as she was in Caged, Pride of the Marines, and even in The Sound of Music — but here she is so shrewishly over the top that her presence alone all but castrates the drama.

And while Sinatra shoots up and Parker hams it up, Kim Novak stands around looking pretty.

New York, NY — In celebration of Academy Award®-nominated director and producer Otto Preminger’s centennial, the “Monday Nights with Oscar®” film series will screen The Man with the Golden Arm on Monday, November 13, at 7:30 p.m. at the Academy Theater at Lighthouse International in New York City.

Hosted by Foster Hirsch, a professor in the film department at Brooklyn College of the City University of New York and author of an upcoming biography of Otto Preminger, the program will feature a newly restored print from the Academy Film Archive‘s Otto Preminger Collection and an onstage discussion with Hope Preminger, the director’s widow.

The Man with the Golden Arm, nominated for three Academy Awards®, stars Frank Sinatra as an ex-con struggling with heroin addiction, a disabled wife (Eleanor Parker) and his desire for his ex-girlfriend (Kim Novak) in a gritty, groundbreaking drama.

“Monday Nights with Oscar” is a monthly series showcasing high-quality prints of films that have been nominated for or won Academy Awards.

Tickets may be reserved by calling 1-888-778-7575. Depending on availability, tickets may be purchased the night of the screening. Doors open at 7 p.m.

Through a black hole in the cosmic fabric, Dustin Hoffman, Robert Redford, Jason Robards, Jack Warden, and Martin Balsam are able to watch primetime TV news from the year 2006. They can’t believe that the U.S. political scene could be even more dire in the early 21st century than it was in the early 1970s.

Some consider it the best political film ever made. I don’t agree, but All the President’s Men is a must-see because it reminds us all that history – minus the truth-digging reporters and the newspaper editor who actually cares about real news – keeps repeating itself because human beings are either too stupid or too lazy (or both) to learn from the past.

I’m assuming that the names of the “members of the cast and crew” who will show up at the screening will be announced at a later date. Three of the performers shown in the picture above (Jason Robards, Jack Warden, and Martin Balsam) are dead, and so is the film’s director, Alan J. Pakula.

Beverly Hills, CA – CREEP, Deep Throat and two tenacious reporters, will hit the screen at the Academy of Motion Picture Arts and Sciences’ 30th anniversary presentation of All the President’s Men on Thursday, November 16, at 8 p.m. at the Samuel Goldwyn Theater in Beverly Hills. In addition a panel discussion with members of the cast and crew will be moderated by Newsweek film critic David Ansen.

A new print of the film, from the Academy Film Archive, will be screened.

All the President’s Men recounts the Watergate scandal from the point of view of Washington Post reporters Bob Woodward (portrayed by Robert Redford) and Carl Bernstein (portrayed by Dustin Hoffman), whose Pulitzer Prize-winning investigation led to the discovery of the Nixon tapes, the resignations of prominent White House staffers and ultimately the resignation of Nixon himself. The film, based on the reporters’ book of the same name, reveals the identities of several key sources and offers detailed accounts of Woodward’s secret meetings with his now-infamous source, “Deep Throat.”

Tickets for All the President’s Men are $5 for the general public and $3 for Academy members. They may be purchased in advance at the Academy beginning November 1, by mail, or if still available, on the night of the event when the doors open at 7 p.m. Seating is unreserved. 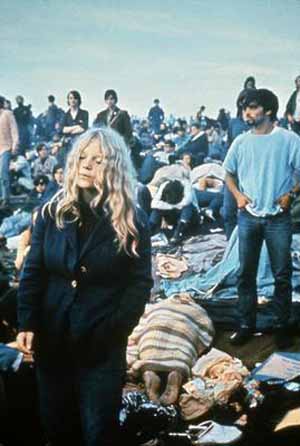 Beverly Hills, CA – The Oscar® winner for Documentary Feature of 1970, Woodstock, will screen on Monday, October 23, 2006, at 7:30 p.m. at the Academy of Motion Picture Arts and Sciences’ Samuel Goldwyn Theater as the next installment of “Oscar’s Docs, Part Two: Academy Award®-Winning Documentaries 1961–1976.” The 11-week series showcases the short and feature-length documentaries honored each year by the Academy.

A cast and crew reunion will take place the following night, Tuesday, October 24, in the Academy’s Samuel Goldwyn Theater, during which the following Woodstock alums will participate in a series of panel discussions about the making of the film:

A 35mm print of the original three-hour 1970 stereo theatrical release of Woodstock will be screened courtesy of Warner Bros.

Tickets for each evening of “Oscar’s Docs: Woodstock” are available for $5 for the general public and $3 for Academy members and students with valid ID. Tickets may be purchased by mail, in person at the Academy during regular business hours or, depending on availability, on the night of the event when the doors open at 6:30 p.m. The Academy’s Samuel Goldwyn Theater is located at 8949 Wilshire Boulevard, Beverly Hills. For more information, call (310) 247-3600.

Great,great film!! This is the film that FS should have recieved a academy award for.