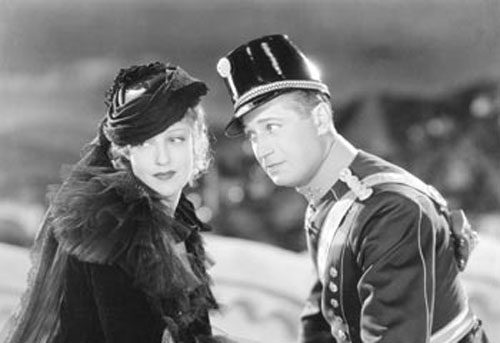 The Merry Widow with Jeanette MacDonald and Maurice Chevalier.

The Merry Widow is neither one of Ernst Lubitsch’s most discussed nor best-liked films. Film critics and historians generally tend to focus on a couple of his early, pre-Code Paramount talkies, One Hour with You (co-directed with George Cukor) and Trouble in Paradise, and his later comedies Ninotchka and To Be or Not to Be.

But that’s the critics’ and historians’ fault. For the visually and aurally arresting The Merry Widow is a superlative musical, boasting sumptuous sets (production design by Cedric Gibbons), exquisite black-and-white cinematography (Oliver T. Marsh), and a magnificently staged ballroom-dancing sequence that should impress even those who couldn’t care less about either musicals or ballroom dancing.

And that’s not all, for The Merry Widow is much more than “just” a lush Hollywood musical. Based on Franz Lehár’s operetta, this 1934 MGM superproduction is filled with romance and heartbreak, in addition to lots of witty lines and situations, courtesy of Lubitsch collaborators Samson Raphaelson and Ernest Vajda. Those are as good as, if not better than, the best risque dialogue and double entendres you’ll find in any other Lubitsch production – or in any other film comedy, period.

And finally, there are charming performances by a surprisingly restrained Maurice Chevalier (though I wish Ramon Novarro, who had been mentioned as a possibility back in 1932, had been cast instead), and by an alternately hilarious (“There’s a limit to every widow!”) and heartrending Jeanette MacDonald. Indeed, as the recently widowed Madame Sonia, who falls in love with Chevalier’s womanizing Count Danilo, MacDonald delivers the most effective and most nuanced performance of her career.

I should add that MGM had produced a previous version of The Merry Widow in 1925. Erich von Stroheim directed that silent film starring John Gilbert and Mae Murray. Though well-crafted and enjoyable – if a tad slow-moving – Stroheim’s version has two major shortcomings: the obvious lack of music on film and the near-absence of unabashed romance and subtle humor, both of which can be found throughout Lubitsch’s remake. Curtis Bernhardt’s 1952 remake starring Lana Turner and Fernando Lamas is a beautiful, empty shell of a film.

Whenever someone says, “They don’t make ’em like they used to,” The Merry Widow is one of those Old Hollywood movies that immediately come to mind. Most productions of the studio era were as mediocre – or as downright rotten – as the majority of what gets made today. Something like The Merry Widow was a precious gem, one that remains just as sparkling nearly eight decades after its original release.

As an aside: One of the most expensive productions of the 1930s, The Merry Widow failed to recover for the studio its $1.6 million (about $27.23 million today) production cost – plus marketing and distribution expenses – despite solid revenues (rentals of $2.6 million, or about $44.26 million today) from around the world.

I should add that those figures, via the US yearly inflation index, would actually be considerably higher today, as both movie-production and movie-ticket costs have gone up way more than the official inflation index. Box Office Mojo’s inflation-adjusted calculator would have The Merry Widow earning the studio about $90 million today.

Also, note that the $2.6 million in rentals refers to the money that MGM earned, not the actual gross earned by The Merry Widow at the global box office. It’s unclear how much more than would be, as back in those days distributor Loews, Inc., owned MGM; I haven’t been able to find Loews’ cut of the revenues earned by their MGM releases. If today’s rental/gross ratio is applicable to the 1930s, then The Merry Widow would have grossed about twice the aforementioned amount, or $5-$5.5.

The source for the cost/rental figures is the Eddie Mannix Ledger found at the Academy of Motion Picture Arts and Sciences.

History of Sound in Film: A Century of Sound Co-Creator Robert Gitt Q&A

A poor rewrite of the original libretto. And Maurice chevalier is utterly resistible

Beautifully written, and I agree that the film is an underrated gem. I think Ramon Navarro would have been great, but I do love Chevalier and I’m glad he and MacDonald were able to work together at MGM.