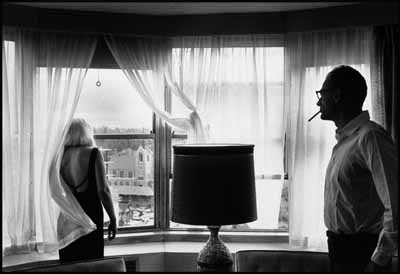 Rare photos of Marilyn Monroe, Clark Gable, Montgomery Clift, Arthur Miller, and others involved in the making of John Huston’s 1961 dramatic modern Western The Misfits are to be found in the exhibit “Inge Morath: road to reno,” on view at the Nevada Museum of Art until July 15.

The exhibit consists of about 70 photos, mostly in black in white. They record photographer Inge Morath’s 18-day road trip from New York City to Reno, where The Misfits was filmed throughout the summer and fall of 1960. Morath was one of nine photographers assigned the job by Magnum Photos, the company hired to document the shoot.

According to museum curator Ann Wolfe, Morath was “not interested in simply capturing the star power and the legend. She was looking for a greater truth behind the surface. It was a bittersweet melancholy encapsulated in some of her photos.”

Morath’s pictures of Marilyn Monroe “are particularly empathic and touching as she caught Marilyn’s anguish beneath her celebrity, the pain as well as her joy in life,” wrote Arthur Miller, the film’s screenwriter and Monroe’s husband at the time.

The Austrian-born Morath later married Miller, with whom she remained until her death at age 77 in 2002. Miller died in 2005 at age 89.

Also at the Nevada Museum of Art: On Friday, May 18, at noon, Neal Cobb, Reno historian and member of the Historical Resources Commission, “will share his encyclopedic memory of the events and people surrounding the making of the film and the impact it left in Reno.”

The making of The Misfits (above, Thelma Ritter with Gable and Monroe), a downbeat drama about a burgeoning affair between a divorcee (Monroe) and an aging cowboy (Gable), was marred by a series of on-set difficulties. In addition to Marilyn Monroe’s chronic tardiness and her marital woes with Arthur Miller, production was delayed by Montgomery Clift, still suffering from severe physical and emotional issues caused by his near-fatal car accident three years earlier. Compounding matters, many cast and crew members took part in late-night drinking and gambling. (Having arrived during the early weeks of filming, however, Morath didn’t get to capture the behind-the-scenes tensions and flare-ups.)

A box office and critical disappointment, The Misfits turned out to be the last completed film for both Gable and Monroe. Gable, 59, died of a heart attack twelve days after filming was completed (some blame his death on the arduous shoot); Monroe’s 1962 death, at age 36, happened not long after she was fired from George Cukor’s Something’s Got to Give. Her death was ruled a suicide.

Montgomery Clift made three more film appearances before dying of a heart attack at age 45 in 1966.

One of the film’s second leads, however, Eli Wallach, 91, is still around and still making movies. 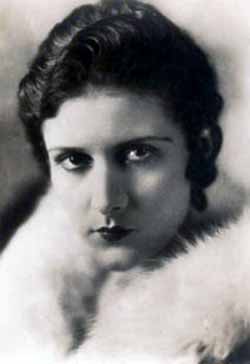 From Lynn Kear, co-writer of Kay Francis: A Passionate Life and Career:

My colleague James King and myself are now researching the life and career of Evelyn Brent, a popular Hollywood leading lady of the 1920s. Among her best known films are Josef von Sternberg’s crime dramas Underworld (1927) and The Dragnet (1928), and Paramount’s first all-talking picture, Interference (1928), with William Powell and Clive Brook.

We are interested in hearing from anyone who knew Evelyn Brent or has information on any of her husbands: B.P. Fineman, Harry Edwards, and Harry Fox.

In addition, we’d like to hear from people who knew or have information on Evelyn’s partner, Dorothy Conrad (the last name is sometimes listed as Herzog, and sometimes as Konrad).

Finally, we’re looking for the following:

Robert Vaughn, 74, best known for the 1960s TV series The Man from U.N.C.L.E., spoke with Sanjiv Bhattacharya of The Observer. In the brief interview, transcribed as a series of one-liners, Vaughn comes up with several highly quotable statements.

A couple of samples:

“Cary Grant was able to have a child after doing LSD. So I guess it’s good for some people.”

“An autobiography is a history of your life. A memoir is how you remember it. I’m attempting a memoir. It’ll be published in spring 2008. It’s about the time up to when I got married – I was a bachelor till I was 41. I’m trying to make it more than just ‘then I left London and I fucked Jane Brown…’ – you know the sort of thing. A lot of my memories are ‘and then I fucked’ memories.”

Vaughn’s film work is mostly – and in all likelihood justly – forgotten (I mean, The Lucifer Complex, Superman III, Skeleton Coast), but he did appear in a half-a-handful of important films.

By the way, he also happens to be the only surviving Magnificent. (The other six were Yul Brynner, Horst Buchholz, Steve McQueen, James Coburn, Brad Dexter, and Charles Bronson.)

“Lon Chaney (1883-1930) is a paradox. He was a character actor unrecognisable to most cinemagoers, but he became the biggest star of his era. He was a man who terrified, intrigued and revolted audiences in equal measure in famous roles such as The Phantom of the Opera or The Hunchback of Notre Dame, but was known to be courteous and soft-spoken.

“Chaney was a shape shifter. Grotesques were his speciality. He could play hunchbacks, limbless gangsters, Dickensian villains, clowns, insane surgeons, old ladies and vampires. You never knew where you would see him next. ‘Don’t step on that spider,’ director Marshall Neilan told a party guest. ‘It might be Lon Chaney.'”

London’s The Barbican () will screen a couple of Lon Chaney films in the upcoming weeks:

The Unknown (1927), directed by Tod Browning. Screening on Apr. 15, with live accompaniment by DJ Nacho Martin.

The Unknown is a way-over-the-top melodrama about a dagger thrower who has his arms chopped off because Joan Crawford suffers from armophobia (a word I just coined). The problem is that Crawford eventually comes to the realization that arms can be cozy, as long as they’re those of strong man Norman Kerry. Needless to say, Chaney goes totally bonkers. From then on, who knows where those daggers are going to land? Some have found The Unknown to be tasteless and vile, and perhaps it is – though I’d personally describe it as fascinatingly bizarre.

The Hunchback of Notre Dame (1923), directed by Wallace Worsley. Screening on Apr. 22, with live accompaniment by Stephen Horne.

The Hunchback of Notre Dame was one of the most expensive films of the silent era, but this slow-moving adaptation of Victor Hugo’s tale works only sporadically. Lon Chaney is fine, but his is basically a supporting role. Patsy Ruth Miller plays Esmeralda, and Norman Kerry is the hunky man she loves.

Variety is the source for The Misfits‘ rentals figure.

The Misfits‘ final budget is mentioned in James Goode’s 1963 book The Story of ‘The Misfits’.

One of the most underrated tv and film stars. You can catch him in early episodes of thriller theater and Alfred Hitchcock when he was unbelievably handsome in the early to mid 60’s

Can’t wait read to read all about her…

Saw The Silver Horde today (for the first time) with Brent playing Cherry Mallotte. She was really wonderful- low key, natural. I want to see more of her work.

I’ve just uploaded to YouTube a 1919 Edgar Jones 2-reel drama called BORDER RIVER that Evelyn appears in as the love interest. It is scored, and uploaded in HQ. You can watch it at youtube.com/view_play_list?p=69D7AC682F4A0E1C