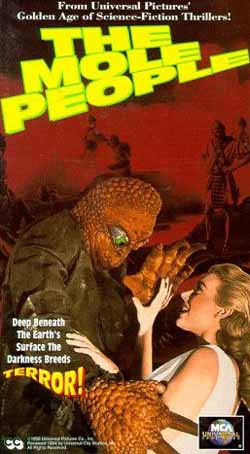 Sometimes bad films get reputations they thoroughly deserve, for instance, Plan 9 from Outer Space, Santa Claus Conquers the Martians, and Robot Monster. These films are so ineptly staged, directed, written, and acted that they are actually very funny, if not necessarily “good.” Sometimes bad films get reputations they do not deserve – in the sense of being thought of as good or even great films. These films even lack the kitsch factor of the aforementioned examples. They are dull, plodding, and preachy, e.g., Brokeback Mountain, Crash, Monster, Million Dollar Baby, Titanic, Saving Private Ryan, and Schindler’s List. Then there are films that are thought of as bad, but unfairly so. Even though they may not be particularly good, they fulfill their task as serviceable entertainment.

One of the best examples of this sort of unfairly critically maligned motion picture is the 1956 Universal-International sci-fi-cum-horror filmThe Mole People. Yes, with that title and made in that decade, one might think that this 77-minute, black-and-white B movie is along the lines of Plan 9, Santa Claus, et al. – or even worse ones, those lack humor, e.g., Killers from Space and Devil Girl from Mars.

Yet, The Mole People actually offers ideas, and is far superior to many of the other films that, like it, were parodied on the TV show Mystery Science Theater 3000. True enough, those ideas are both silly and quite a stretch, but this attempt at seriousness is portrayed from the start in a three-minute prologue where a supposed USC professor, Dr. Frank C. Baxter, gives a history of the belief in worlds inside the Earth.

Whether or not Baxter was really a professor at USC is a subject for online debate. Some critics claim he was (and he seems to be, if one googles his name), and did the film as a favor to the producer. Others, however, claim it was an act – just as what was done in several Ed Wood films – to lend authenticity to plot of The Mole People. Either way, the prologue works as kitsch, especially when the professor intones about the wonders of modern science — that catch-all phrase from the ’50s that could explain any monster, alien, or mutant.

Even better is the fact that The Mole People stars that great hero of 1950s B sci-fi films, John Agar, a sort of hammy spiritual godfather of later B-film actors such as John Saxon, Doug McClure, and Bruce Campbell. After serving in World War II (and marrying Shirley Temple in 1945), Agar became pals with John Wayne – who apparently was looking to associate himself with American glory after sitting out the war. In the late 1940s, Agar was cast in three Wayne vehicles: The John Ford Westerns Fort Apache and She Wore A Yellow Ribbon, and the war drama Sands of Iwo Jima. Shortly thereafter, however, Agar’s stock as an actor fell. As a result, he is best remembered for his sci-fi B roles in films such as The Mole People, Tarantula, and most especially The Brain from Planet Arous.

The Mole People was directed by the forgettable Virgil Vogel (later a TV director) and written by one László Görög, but all this duo really did was string a fifty-minute tale – one that would be at home on then contemporaneous (give or take a few years) TV shows like One Step Beyond, The Twilight Zone, or The Outer Limits – upon recut documentary footage shot in the Himalayas. Add to that a few nifty matte paintings, and this tale of a Sumerian city sunk below a mountain after surviving the Noachian Flood succeeds on a gut (and inane) level.

Those now-albino Sumerian descendants have seemingly lacked any type of technical advancement in 5,000 years – though they somehow speak English. (It’s implied that Agar’s character is speaking to them in Sumerian – except that another character manages to communicate with them, too, even though he does not understand that tongue – oh, well…) Additionally, they have enslaved a race of Mole People that archaeologist Dr. Roger Bentley (Agar, in full Great White Rock Hunter mode) and his sidekick, Dr. Jud Bellamin (Hugh Beaumont, in his pre-Ward Cleaver of Leave It to Beaver days), long to emancipate, a socially conscious plot element that places The Mole People more in line with efforts such as The Day the Earth Stood Still and The Invasion of the Body Snatchers.

Other pluses offered by The Mole People are the requisite nubile blonde outcast from albino society, Adele (Cynthia Patrick), who falls in love with Bentley; a pre-Alfred the Butler Alan Napier as Elinu, the scheming and evil Sumerian High Priest; and a dim-witted King Nazar (Rodd Redwing), who – especially in white face – bears an uncanny resemblance to actor Brent Spiner, who played the android Lt. Commander Data on Star Trek: The Next Generation.

Of course, suspension of disbelief is essential, especially in things scientific. For instance, the trio of scientists (including Nestor Paiva as Professor Etienne Lafarge) are only a couple of hundred feet below the mountain’s top of near twenty thousand feet in height, but they descend to sea level when they go after a colleague who has fallen into a crevasse.

As for the plot, the Sumerian albinos believes Bentley is their goddess Ishtar’s messenger after he shines his flashlight on them. Eventually, Elini dissuades the King from this belief, so they plot to kill Bentley and Bellamin. But a kindness shown to the Mole People results in their rebellion when the two scientists are forced into a tunnel filled with sunlight. They slaughter the Sumerians, and Adele flees to the surface with the two scientists. Once there, an earthquake occurs (one had occurred earlier in the film, and started their adventure in search of Sumerian ruins and wealth), and Adele is killed, and the city buried under rubble. There will be no proof of their adventure, as in so many films. Then, the movie just ends, abruptly, without Agar giving one of his greatly ridiculous pontifications – something he does often throughout The Mole People and in several of his other films as well.

As for the sets and costumes – standard-issue crapola. The cave sets are retreads and the Mole People costumes are garbage. That said, the all-around raggedness make them scarier, especially since they were filmed in black and white, and in semi-darkness.

Now, as seemingly forgettable as The Mole People may sound, it has had a profound impact on later sci-fi novels and films. In The Mole People, when the albinos reach a certain population they have to sacrifice citizens in a ceremony by letting them fall into full sunlight. Richard Fleischer’s Soylent Green (1973), from a 1966 novel by Harry Harrison, deals with an overpopulated society getting rid of the unwanted in an society, while Michael Anderson’s Logan’s Run (1976), from William F. Nolan and George Clayton Johnson’s 1967 novel, has a sealed-off society that kills people once they reach the age of thirty. Beneath the Planet of the Apes (1969), with its subterranean albino humans, was also influenced by The Mole People.

Aside from its influence on later sci-fi works, The Mole People provides Agar with a great line that presages the 1960s. That happens when he comments on the Sumerians’ habits of eating mushrooms and wonders if they’ve ever smoked dried mushrooms. It’s a small moment, but one that, if seen in the right light, is both comic and subversive, as well as damned insightful into what such a character might be thinking about in such a silly situation.

On the other hand, one strong influence upon The Mole People may have been the 1951 George Reeves Superman feature culled from the TV show episodes, Superman and the Mole Men. Also, perhaps, the 1934 Laurel and Hardy vehicle Babes in Toyland, which presages the Mole People’s rebellion when the similarly raggedy costumed Bogeymen attack Toyland. And certainly, H. G. Wells’ The Time Machine – though, curiously, the 1960 film version seems to have drawn inspiration from The Mole People.

The Mole People DVD is part of a five-film, three-DVD package called “The Classic Sci-Fi Ultimate Collection.” The Mole People shares its DVD with another John Agar classic, Tarantula. The disc offers no extra features, save the original trailer. Universal did a good job in restoring The Mole People, as the transfer is remarkably good and the black-and-white shadows of the cave are effectively used. The film is presented in its original 1.33:1 aspect ratio. The other three films in the set are The Incredible Shrinking Man, The Monolith Monsters, and Monster on the Campus.

The Mole People is not great cinema; it isn’t even great sci-fi in a B mode. Its social commentary could hardly be considered profound or illuminating – yes, slavery is bad – but it has its special moments, and it surely entertains. It also has John Agar, one of those indelible actors who, for better or worse, is unforgettable in every role he takes on – a quality that precious few A-list actors possess. Besides, any film that can inspire so many quality sci-fi films definitely has something going for it. See what it might dig up in you.

Finally, someone who understands one of the hardest films to find and watch anywhere.

The Star Fleet emblem that appears throughout the movie is quite intriguing to us trekkies. Certainly many interesting tie bits of trivia.

This movie is influential in a way Dan did not contemplate: on the mind of an impressionable boy. I first saw this around age 10. The USC professor set the tone for a life spent in academe and an equal interest in history. The meme of the collapse of civilization mirrored by the collapse of the mountain on the Sumarian survivors.

The blonde girl I wanted to marry. (They don’t make them like that anymore, do they?!)

So maybe The Mole People doesn’t qualify as high art to the sophisticated palette. But as instruction and inspiration to a boy with an open mind?

I like this movie a lot. I feel it has a strong star trek vibe and the symbol they worship is like the star trek symbol. The layered plot is above average and the costumes and sets aren’t that bad. A B classic from the fifties.

The beginning was just a charming disarming delight. “This film is fiction” heh

I got a strong sense of adventure from the “set up”. The set was convincing enough and the dig vibe was strong. I got the same feeling from the set up in Dr. Cyclops…like some worthwhile adventure is coming our way…meanwhile exotic bliss.

I wish P Jackson or that Avatar guy would watch this. This is better than PC fairy tales and mother goose engorged with CGI.

Also, there is a real world where life could live on the inside shell, where up is down etc. Europa, the ice-capped ocean moon of Jupiter. Now theres a story waiting to be told.

The Mole People are really the Mayas.You know how the Mayas disappered off the face of the earth and that symbol was the only thing they left. Well that symbol was really a sign they left for the Mayas who were still coming.They found an underwater cave and live there still.