In his blog, film reviewer Richard Roeper says the following:

“When it comes to announcing the Oscar nominees, the Academy of Motion Pictures Arts & Sciences continues to cling to is Old World ways. They race through the lists at 5:30 a.m. PST, in order to get live coverage on the morning talk shows.

Roeper then repeats his suggestion that the Academy “should turn the nomination announcements into a one-hour special … showing clips and interviewing possible nominees. Have some cameras on set or in the homes of some contenders, to catch their reactions. If they can do it with the Heisman Trophy every year, why not the Oscars?”

For the 1955 Oscars (covering movies released the previous year), the Academy aired the announcement of the nominations on Feb. 12. Jack Webb, the star of the television hit Dragnet, acted as the show’s chief host, assisted by several others placed at various Hollywood nightclubs, including Humphrey Bogart, Irene Dunne, Greer Garson, Donna Reed,and gossip columnist Louella Parsons, who read the nominations with the assistance of her jewel-encrusted opera glasses.

Television viewers saw Joan Crawford, Judy Garland, Nina Foch, Edmond O’Brien, Katy Jurado, Lee J. Cobb,and a few others, some of whom ended up nominated while others weren’t. (If Crawford believed she was going to get a nomination for Johnny Guitar, she must have been mighty disappointed.)

According to Mason Wiley and Damien Bona’s Inside Oscar, the nominations “event” was greeted by “universally negative reviews,” with the New York Times remarking, “The video and film industries can stop worrying about competition. The only thing they have to fear is co-operation.” Ratings, however, were good. 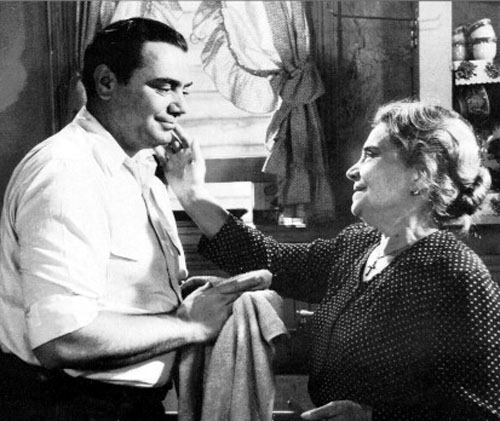 So good, in fact, there was a replay the following year, this time at only one location: a television studio, with two-time Academy Award winner Fredric March as host. When Ernest Borgnine (above, in Marty), Marisa Pavan, Natalie Wood, Eleanor Parker, Susan Hayward, Jack Lemmon, and Arthur O’Connell had their nominations confirmed, they walked to a blackboard and signed their names on it as was the custom on the TV show What’s My Line?.

When the deceased James Dean’s name was read (for East of Eden), June Haver declared she’d “love to to have the honor of writing his name on the board.” Sheree North, for her part, had more pressing concerns. Before reading the nominations in the best costume design category, she began: “Last year’s award went to Gate of Hell – oops, can I say that?”

More great ratings and awful reviews greeted the 1956 show. According to Inside Oscar, enough Academy members raised a ruckus that the Oscar nominations show was axed then and there and hasn’t been resurrected since.

That’s too bad, really. This year, they could’ve come up with something featuring Sandra Bullock, Meryl Streep, Jeff Bridges, Colin Firth, Mo’Nique, James Cameron, Kathryn Bigelow, and Christoph Waltz either signing their names on the Academy’s Facebook page or tweeting their electronic signatures live on TV the moment their names are read. Then they could all go back to their seats and smile for the camera.

Fredric March Movies: A Star Is Born + Alexander the Great