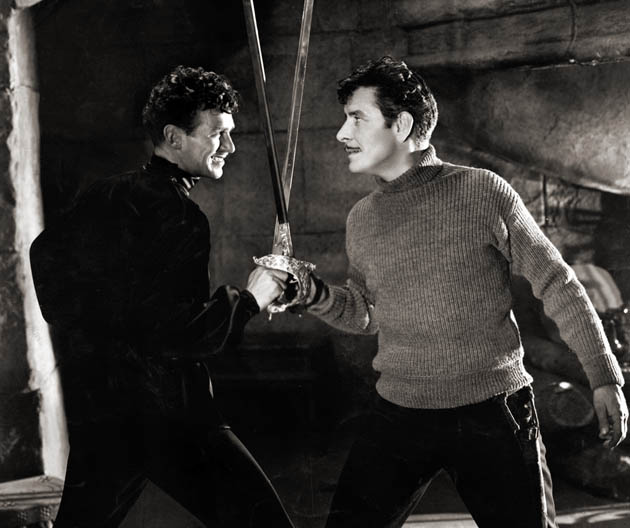 Celebrating Douglas Fairbanks Jr.’s centenary, the Academy of Motion Picture Arts and Sciences will screen The Prisoner of Zenda (1937) on Wednesday, Dec. 9, at 8 p.m. at the Samuel Goldwyn Theater in Beverly Hills.

The son of silent era superstar Douglas Fairbanks (The Thief of Bagdad, The Iron Mask) and Anna Beth Sully, daughter of a cotton financier, Fairbanks Jr. was born on Dec. 9, 1909, in New York City.

Based on Anthony Hope’s 1894 novel, The Prisoner of Zenda 1937 was produced by David O. Selznick and directed by John Cromwell. Also in the cast: Ronald Colman, Madeleine Carroll, and Mary Astor.

The Academy’s presentation of The Prisoner of Zenda will also have Oscar-winning visual effects supervisor Craig Barron and four-time Oscar-winning sound designer Ben Burtt discuss the photographic and sound effects used in the Selznick-Cromwell classic.*

In addition, the evening will feature rare behind-the-scenes color footage from The Prisoner of Zenda set, courtesy of the Academy Film Archive’s Home Movie Collection. That includes cinematographer James Wong Howe and his camera crew, along with Douglas Fairbanks Jr. practicing a bit of swordfighting.

There’s more: never-before-seen camera tests from the personal collection of visual effects cameraman Clarence Slifer; these show how some of the film’s illusions – Ronald Colman has a dual role – were created.

The tale of King Rudolf V of the Central European kingdom of Ruritania; his English double, Rudolf Rassendyll; and an intricate plot to steal the throne, The Prisoner of Zenda 1937 is generally considered the best version ever made.

For instance, even though future Ben-Hur star Ramon Novarro, in his first important role, is quite effective as the suave, self-serving villain Rupert of Hentzau in the silent film, Douglas Fairbanks Jr. – aided by some good dialogue and a more naturalistic approach to the role – is outstanding as Rupert.

In fact, this could well be the best characterization of his career, which, admittedly, mostly consisted of less-than-likable performances in mostly less-than-memorable movies. As a ruthless villain in an A production, Fairbanks Jr. had found his potential niche; it’s too bad he didn’t pursue it.

Douglas Fairbanks Jr. is not the only The Prisoner of Zenda 1937 cast member to be at his best. Ronald Colman, one of the most underrated actors of the studio era and far superior to Lewis Stone in the Ingram film, is Fairbanks Jr.’s equal here. After all, next to a villain as alluring as Rupert of Hentzau, only a thoroughly engaging hero would make this viewer root for him.

Beautiful, blonde Madeleine Carroll, for her part, looks fantastic while proving herself a capable performer – Carroll should have been (and should still be) much bigger than Grace Kelly.

Also appealing is scandalous diarist (much ado about it during filming) and future Best Supporting Actress Oscar winner Mary Astor (The Great Lie, 1941) in a smallish role.

And John L. Balderston, Edward Rose, and Wells Root’s screenplay, with additional dialogue by Donald Ogden Stewart. And much more.

Another well-known – but not as well-received – movie version of Anthony Hope’s novel was released by Metro-Goldwyn-Mayer in 1952. Richard Thorpe directed Stewart Granger, Deborah Kerr, James Mason, and Jane Greer.

Peter Sellers starred in a 1979 spoof directed by Richard Quine, and featuring Lynne Frederick, Lionel Jeffries, Elke Sommer, Jeremy Kemp, and Catherine Schell. Another spoof is found in an extended segment in Blake Edwards’ The Great Race, with Ross Martin as the Rupert of Hentzau-like villain.

And let’s not forget Ivan Reitman’s 1993 box office hit Dave – written by Gary Ross, and starring Kevin Kline as a U.S. president and his double, and Sigourney Weaver as his romantic interest – which was clearly inspired by the tale of King Rudolf V/Rudolf Rassendyll.

In movies from the early 1920s to the mid-1950s, in addition to one big-screen comeback in the early 1980s, Douglas Fairbanks Jr. was seen in about 80 features.

Besides The Prisoner of Zenda 1937, notable efforts included:

Fairbanks Jr. was married three times. One of his wives was then MGM star Joan Crawford (1929–1934), with whom he was featured in Jack Conway’s late silent Our Modern Maidens (1929).

The Samuel Goldwyn Theater is located at the 8949 Wilshire Boulevard in Beverly Hills. For more information on the Academy’s The Prisoner of Zenda 1937 screening, call (310) 247-3600 or visit www.oscars.org.