‘The Return of the Secaucus 7’: Early & Flawed John Sayles Effort

Early John Sayles’ effort: ‘The Return of the Secaucus 7’ 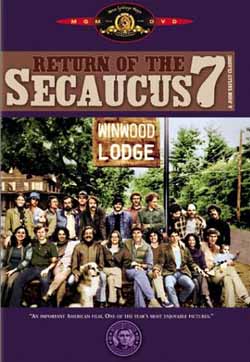 Independent filmmaker John Sayles’ 1980 feature film debut, The Return of the Secaucus 7, has the typical feel of the low-budget productions from that era – even those in the horror genre, such as Last House on the Left or The Texas Chain Saw Massacre. Indeed, prior to embarking on his directorial career Sayles had been a screenwriter and script doctor for Roger Corman’s cheapo horror fare. Unfortunately, the excellence of Sayles’ later films only points up the flaws of this first effort. Like many low-budget indies, The Return of the Secaucus 7 is long on talk and short on both action and visual razzle-dazzle. Worse yet, it is filled with amateurish acting and unrealistic dialogue.

The Return of the Secaucus 7 has often been compared to Lawrence Kasdan’s 1983 comedy-drama The Big Chill. In fact, both films suffer from a dearth of characterization that weighs them down. The characters in The Return of the Secaucus 7 are little more than stereotypes: Some are teachers, two are speechwriters for a U.S. Senator – Irene Rosenblue (Jean Passanante) and Chip Hollister (Gordon Clapp) – while another is a bad country singer-songwriter. The plot follows this group of pretentious thirtyish former college radicals who gather for a weekend reunion in a small New Hampshire town. Other than that, there is no real storyline, merely thinly connected scenes of gossip, flirtation, barbecues, Charades and Clue, volleyball, and basketball, nude male rock diving, and alcohol and drug consumption.

Shot at a New Hampshire lodge, The Return of the Secaucus 7 opens with a shot of one of the characters, Mike Donnelly (Bruce MacDonald), plunging a filthy toilet. It never gets significantly better after that. Films short on narrative require in-depth characterizations, and this is where writer-director Sayles fails. There is not a single character that stands out, except perhaps for the bad and mooching country singer, J.T. (Adam LeFevre), who stands out in a negative light. All the female characters – unusually homely and stereotypically Ms. Magazine whiney – seem to be cut from the same mono-dimensional cloth, whether in looks or opinions.

When the gang goes to a local Summer Stock performance, they badmouth one of their actress friends, Lacey Summers (Amy Schewel) – ironically, their very criticisms are applicable to the film’s actors themselves. Perhaps the only good performance found in The Return of the Secaucus 7 is given by Sayles regular David Strathairn, who plays grease monkey Ron Desjardins. The rest of the cast seems to have barely memorized their lines, which are uttered in a manner devoid of passion. (That may help to explain why none of these wannabe actors ever crafted film careers after this one.)

When two characters have a one night stand – J.T. and Maura Tolliver (Karen Trott) – they lack any real chemistry; their scenes together come across as embarrassingly phony. Of course, the next day the gal’s ex-boyfriend and best friend of J.T., Jeff Andrews (Mark Arnott), shows up. That’s the stuff of bad soap operas, not ‘cinema.’ It also stands in sharp contrast to contemporaneous films with a similar bent, such as Diner, that were considerably better.

As for the film’s title, the viewer is only clued into its meaning near the end, when the gang is held by local police for supposedly killing a deer they come upon on a nighttime road. It seems that seven of the dozen or more people at the reunion were wrongfully arrested and detained in Secaucus, New Jersey, on their way to a Washington, D.C., rally against the Vietnam War – a joking reference to the Chicago Seven. Because The Return of the Secaucus 7 had only a $40,000 budget, it was impossible to use a great musical soundtrack (as was later done in The Big Chill), so Sayles had to rely on bad folk songs penned by his Boston-based friends.

And this reviewer wondered, why more was not made of the great late summer landscape of New England? Surely panning over the White Mountains would not have been so terribly expensive?

The Return of the Secaucus 7 DVD, put out by MGM includes only an 11-minute featurette with Sayles (who stars as motel clerk Howie) and Maggie Renzi (who plays Katie Sipriano, Mike’s girlfriend) recalling the film’s making, and a trailer for Sayles’ 2003 effort Casa de los Babys. The best part of the DVD package, however, is Sayles’ excellent audio commentary. Even if the commentary leans a little too hard on technical aspects of low-budget filmmaking, Sayles’ anecdotes on the male nudity, The Big Chill, and other subjects are involving and brisk. His commentary is a treasure for aspiring filmmakers, offering such details as how The Return of the Secaucus 7, originally shot on 16mm, was then blown up to 35mm, in a 1.33:1 aspect ratio.

Is The Return of the Secaucus 7 wholly devoid of good moments? No. The basketball scenes are well coordinated and give a good sense of how the men bond (in contrast to how the women bond over Clue), but such moments are rare. The Charades scenes, for instance, are typical of the characters’ unrealistic conversations. Not only is the chatter phony, but Sayles cuts far too quickly between scenes in order to propel the story forward. The result is a film that lacks depth.

With classics such as Matewan and Lone Star, Sayles would reveal himself as a filmmaker capable of greatness, but The Return of the Secaucus 7 gives few glances into that later flowering. That in 1997 it was put on the National Film Registry list of American films worth preserving is more a testament to its relevance as Sayles’ initial film than to the film’s intrinsic qualities. Even so, The Return of the Secaucus 7 is an interesting effort that, despite its flaws, is well worth watching – if only by film historians who love discerning small traits that hold clues to the artist’s later and greater art. For the rest of us, flip a coin and you have the same shot at enjoying this film. That’s still better than most of what gets made in Hollywood these days. Sigh.