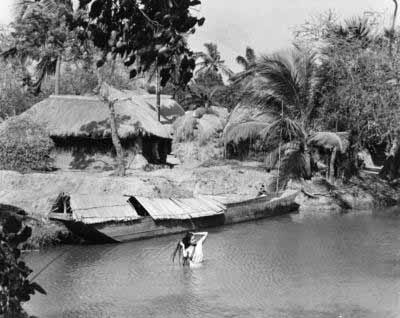 The Academy of Motion Picture Arts and Sciences will be presenting a restored print of Jean Renoir’s 1951 drama The River. Though largely forgotten today, The River remains one of Renoir’s best films. The performances may leave much to be desired and the plot may seem a tad too slight, yet, The River exudes an atmosphere of spirituality such as has rarely been captured on film. Highly recommended.

Beverly Hills, CA – A recently restored print of Jean Renoir’s The River (1951) will be screened by the Academy of Motion Picture Arts and Sciences on Wednesday, April 19, at 8 p.m., in the Academy’s Samuel Goldwyn Theater. The film is presented as part of the Academy’s Gold Standard series.

Shot on location in India,The River was Renoir’s first film in color and is considered the ultimate articulation of the director’s career-long fascination with the theme of water as a life force and source of beauty. Photographed by the director’s nephew, Claude [Renoir], the film’s screenplay was written by Renoir and Rumer Godden, who wrote the novel upon which the film is based.

In The River, Harriet, Valerie and Melanie are teenage friends in India. When the wounded American Captain John arrives, all three vie for his affection. As they do so, the beauty of the country and the day-to-day life of its people are depicted.

The print to be screened is from the new restoration completed by the Academy Film Archive in association with the British Film Institute, Janus Films and The Film Foundation. The restoration was funded with support from the Hollywood Foreign Press Association. The original three-strip nitrate Technicolor camera negative was used for the restoration, along with soundtrack elements from two safety prints. The restored print was premiered at the Cannes Film Festival last year.

Tickets for the Academy’s Gold Standard presentation of The River go on sale April 3 for $5 for the general public and $3 for Academy members. They may be purchased in advance at the Academy during regular business hours, by mail, or on the night of the screening, if still available, when the doors open at 7 p.m. The Academy is located at 8949 Wilshire Boulevard in Beverly Hills. For more information, call 310-247-3600.

Press Release: Beverly Hills, CA – The 1960 Best Picture nominee Sons and Lovers will be screened as the next installment in the Academy of Motion Picture Arts and Sciences’ “Great To Be Nominated, Part Three.” The film, based on the D.H. Lawrence novel of the same name, will be shown on Monday, April 24, at 7:30 p.m. in the Academy’s Samuel Goldwyn Theater.

This is a rare opportunity for motion picture fans to see Sons and Lovers, which has never been released on home video. A new 35 mm print has been provided by 20th Century Fox for the screening.

Music from The Alamo, which also earned seven nominations in 1960, will be played during the pre-show. Other pre-show elements will include Short Subject – Cartoon nominee Mouse and Garden (1960), and a new exclusive video interview with director Jack Cardiff.

The evening’s commemorative program will feature black-and-white photos from Sons and Lovers on the cover.

Passes for “Great To Be Nominated, Part Three” are still available at a cost of $30 for film buffs wishing to see the rest of the series. A $5 discount is available for those who wish to renew their passes from Parts One and/or Two of the series. Inclusive of Sons and Lovers there are 18 screening dates remaining in Part Three.

Tickets for each individual screening may be purchased at a cost of $5 for the general public and $3 for Academy members and students with a valid I.D. Tickets may be purchased by mail, in person at the Academy during regular business hours or, pending availability, on the night of the screening when the doors open at 6:30 p.m. Curtain time for all features is 7:30 p.m. and pre-show elements will begin at 7 p.m. The Academy is located at 8949 Wilshire Boulevard in Beverly Hills. For more information, call 310-247-3000, ext. 111. 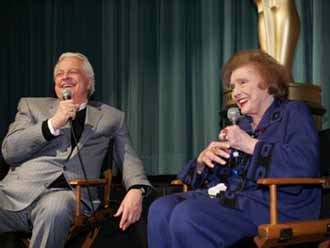 Though her role is basically a supporting one, Patricia Neal – almost – walks away with Hud. She would have run with the movie, if it weren’t for the fact that veteran Melvyn Douglas more than holds his own, too.

Hud is one of the best Westerns – though set in modern times – ever made. The film is an unflinching socio-psychological study of a highly dysfunctional American family – one that boasts two of the greatest performances ever seen on-screen.

New York, NY –  Oscar®-winning actress Patricia Neal will be the special guest when the Academy of Motion Picture Arts and Sciences screens Hud as part of the “Monday Nights with Oscar” series on Monday, April 10, at 7:30 p.m. at the Academy Theater at Lighthouse International in New York City.

Hosted by television host and film historian Robert Osborne, the evening will feature a discussion with Neal followed by a screening of Hud, the 1963 black-and-white drama directed by Academy Award® nominee Martin Ritt.

Hud stars Paul Newman (in his third Oscar-nominated performance) as Hud Bannon, the bitter, amoral son of a rancher, and Neal as Alma, a down-to-earth and soft-hearted housekeeper. The story weaves together family relationships, drunkenness and death.

This screening of Hud will feature a 2005 restored print from the Academy Film Archive, and will be preceded by the 1963 Oscar-winning Short Subject Cartoon The Critic, with Mel Brooks.

The Academy Theater at Lighthouse International is located at 111 East 59th Street in New York City. Tickets for the screening are $5 for the general public and $3 for Academy members and students with a valid I.D.

Tickets may be reserved by calling (888) 778-7575. Pending availability, tickets may be purchased in person the night of the screening. Doors open at 7 p.m.

According to the Hollywood Reporter, Glenn Ford (The Big Heat, 3:10 to Yuma) will make his first public appearance in 15 years at the American Cinematheque’s Egyptian Theatre in Hollywood, where the Canadian-born actor will be saluted on his 90th birthday on May 1.

The event will include a screening of Ford’s film debut, the 1937 musical short Night in Manhattan, and of Charles Vidor’s campy 1946 romantic melodrama-cum-film noir Gilda, in which Ford makes love to Rita Hayworth while being her husband George Macready’s toyboy. The films will be followed by a discussion led by Fords son, Peter.

(This is surprising news, considering that Id heard that Ford had suffered a stroke and was in ill health.)

In his heyday, Ford aged rather rapidly but he also developed into a quite capable actor. Besides the aforementioned The Big Heat – perhaps my favorite gangster flick – and the psychological Western 3:10 to Yuma (directed by the unjustly forgotten Delmer Daves), Ford was also remarkably good in two 1955 dramas, The Blackboard Jungle and Trial.

‘On with the Show’ & ‘Gold Diggers of Broadway’ Fragments 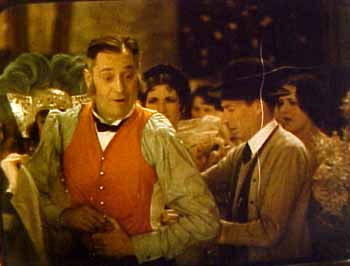 I’ve learned that the recently discovered Technicolor fragments from the 1929 Warner Bros. musicals On with the Show! and Gold Diggers of Broadway are being shipped to UCLA for restoration and preservation.

The fragment from Gold Diggers of Broadway will be incorporated into a partial restoration of the latter part of the film. The new print will consist of surviving footage and audio materials, plus production and publicity stills.

Additionally, it’s possible that these new findings will be included in the Jazz Singer DVD, which is scheduled to come out next year.

Directed by Roy del Ruth, Gold Diggers of Broadway stars Nancy Welford (who had a very brief film career), and silent film veterans Conway Tearle, Ann Pennington (who also did quite well on Broadway), and Lilyan Tashman, plus Broadway sensation Winnie Lightner. Most of the film is now lost.

The backstage musical On with the Show!, directed by The Jazz Singer‘s Alan Crosland, stars Arthur Lake (Dagwood of Columbia’s Blondie series), Betty Compson, Sally O’Neil, Joe E. Brown, and Louise Fazenda. I’ve seen this one and I found it entertaining, though many will probably find the leading players – at best – grating. (I actually found both Compson and O’Neil quite likable, and I particularly enjoyed Fazenda’s brand of over-the-top humor.)

Following a relatively brief stint in the early 1930s at Paramount, where she co-starred with Herbert Marshall and Miriam Hopkins in Ernst Lubitsch’s 1932 classic comedy Trouble in Paradise, Kay Francis became one of the top Warner Bros. stars of the decade.

Though – if remembered at all – better known for the outlandish clothes she wore in her movies than for her acting abilities, Francis could be highly effective in the right part – and under the guiding hand of the right director. In two 1932 WB releases in which she co-starred with William Powell, William Dieterle’s Lubitschian comedy Jewel Robbery and Tay Garnett’s romantic melodrama One Way Passage, Francis exudes just the right touch of both pathos and charm. Both films are sporadically shown on Turner Classic Movies.

I recently saw this wonderful old movie at The New Braunfels,Texas library. I loved all th characters. It’s good to khow Ms.Neal is doing well.Thanks for all the great films and movies.

I should like to view Patricia Neal at Breakfast
Tiffany’s.